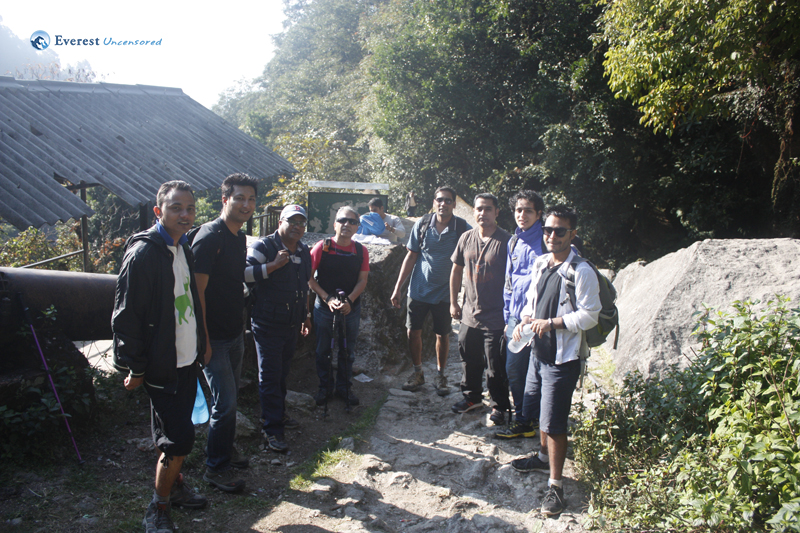 Mohit Baskota
“Get ready to be picked up at 6:30 in the morning this Sunday for Chisopani hike.” – said Pramod Dai. “Whoaa….. 6:30 !! … In the morning aye? … Hummm….” – my thoughts rambled. Not that I am mostly inert, it’s that – I am in a serious relationship with my bed during wintery mornings and prefer things to be started late in the morning. I’ve always been a wanderer, be it on my bicycle or my feet. “Time to wander and explore more .. ” – I thought and decided to give my relationship a break. With a sign of affirmation, I said – “Sure Dai, will be there on time! :)”

As planned, I was picked up at Chabahil – right on time! Nine smiley faced, excited wanderers were already in the van and I glided in as the final one. After a short ride to Sundarijal, our base, we did some shopping and gobbled up our pre-hike snack. Suresh Dai clicked a kickoff group photo and Rudra dai, in sheer enthusiasm, pointed his hiking stick to the steep path ahead and said – “Let’s hike guys!”.

Then began the ascent. The path mostly comprised of stairs leading us to the entrance of Shivapuri National Park. Tickets? – Yes, you had to buy one per person at the entrance.

Hairs gently moved by the cool breeze and ears perplexed by the melodic songs by the birds is one of the many euphoric moments of this astounding trail. As we walked uphill, we reached our first landmark, the reservoir that supplies drinking water to Kathmandu. A mark standing there reminded us that our endpoint is still 14 kms away and that we had just started. Without much delay, we continued climbing uphill. The Trail got divided as we went further, but both were destined to meet at a Tamang village, Mulkharka. We decided to take the path which passed between the village with some settlements rather than following a driveway. On the way, we bonded with fellow wanderers creating memories to cherish. As we climbed up, we saw some trees of “aamla”. “It would be too rejuvenating to have aamla at this moment” – I said . As soon as I picked the word “aamla”, Suresh Dai pulled a packet and said – “here you go”, handing it over to me. We have aamla for real. This aamla moment was really a booster for climbing to be perpetuated further. After around 1 hour of the hike, we finally conquered Mulkharka peak. We stopped at a tea shop for quick refreshment and had tea.

“A journey is best measured in friends, rather than miles.” – Tim Cahill. Indeed, the distance seemed too short as we had the best company. Be it cracking jokes or pulling each other’s legs, moments like these made the journey much more joyous. After Mulkharka, the trail is very different. Having passed the village settlement, the trail then proceeded deep into the woods. It was mostly uphill as we moved on. But after the hike of around 2 hours, it took a dramatic turn. It went mostly downhill from there onwards. Previously, we had planned the return journey to be exactly the reverse of what we are moving towards. With this intense downhill, everyone started thinking otherwise.

“The view must be majestic and will surely leave me spellbound” – I thought of Chisopani. As we reached Chisopani at 2 in the afternoon, expectations were shattered. The natural view was splendid but the aftermath of the earthquake was still there. The sight of half standing houses is not what you expect to see. It had most of our members drenched in fair melancholy.

Everyone was hungry, especially Randhir Dai. Quickly we ordered Daal, Bhat, anxious to treat our tummy. There came gundruk and bhatmas too. After our lunch, without much delay, we planned to move towards Lapsifedi. Then started our descent at around 3. This part of the journey was certain to not fade away from everyone’s memory for long. Rudra Dai took a detour from the road and jumped terrace farms.

There’s no way you can reach our path from this road. Let’s jump the terrace

“There’s no way you can reach our path from this road. Let’s jump the terrace” – he said and we started jumping. We jumped and jumped, never cared much about the consequences. On the contrary, three of our comrades to avoid jumping, moved along the road only to regret. At the end, we reached the base, only to see 3 of us still up in the hill trying to figure out the way. “You need to learn to choose the good leader when you are on a tough road. Don’t be an idiot and follow the leader who have no plans to execute and get you through the hard trails. Experience counts and I have earned it with my 70 plus hikes.” – said Rudra dai. Indeed, in times like these choosing a good leader decides where you stand after the harsh trail.

Darkness befell us. Keeping our cell phone’s flash light to the test, we paced up. We reached Lapsifedi around 7pm where our van awaited. The tired legs jumped immediately into the van, a moment of relief, I guess. We reached Kathmandu at 9pm.

0 thoughts on “Hiking from Sundarijal to Chisapani”