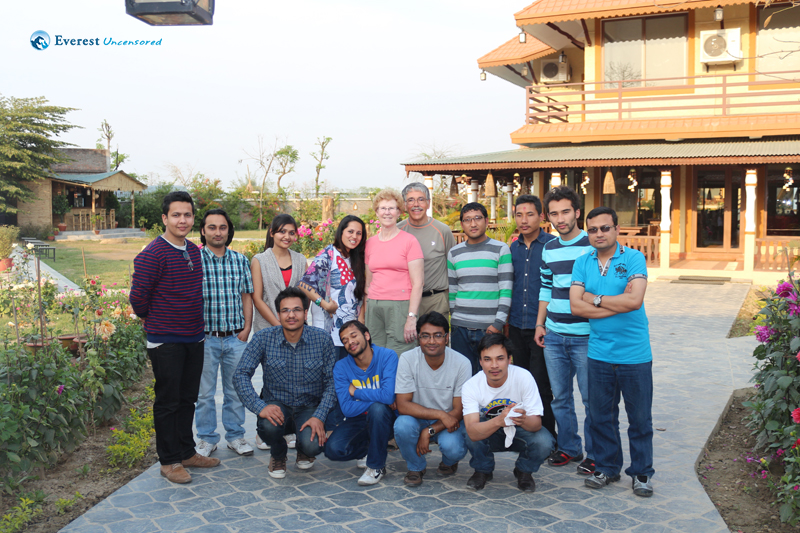 Hiking is one my favorite activities at Deerwalk. There are several other regular events like team buildings and outing which makes Deerwalk an awesome place to work.

Last weekend we headed towards Sauraha located in Chitwan district. This time we also had two guests with us, John Rick and Judi Rick, parents of our own Jeff Rick.

Our journey started early Saturday morning on March 15, 2014 from the Deerwalk building. Some of us gathered in the office premise itself while some were picked up on the way. Then our driver, Mr. Deepak Gurung, was all set to take us to our destination and he chose a different route to Sauraha, via Hetauda. Usually, the route is through Mugling.

We stopped at Naubise for a short breakfast. There was a kid who kept begging for money. He had his own style to ask by touching people’s feet. However we found that his bag was full of money and was trying to deceive the people with his innocent looks. I am afraid, in the future; he will be like a ‘Dhongi Baba’ (Deceptive Sage), who cheats people to earn money. Apart from him, we also encountered a gang of children, on Tribhuwan Highway, who blocked the road and asked for money in the name of Holi. Holi is the festival of colors and water, and is very famous in the Hindu community. Although, there were two days remaining for Holi, kids started it early.

The environment inside the van was quite silent. But someone would crack a joke in the middle and everyone would laugh. Some of the hikers were enjoying the view of the hills and rivers from the van’s window while some were day dreaming. Then, we stopped at Daman for lunch. We also went to the vantage point at Daman, but the view of the mountains was obstructed by the cloud. After lunch, we continued our Journey to Simvanjyang, Hetauda and Sauraha.

It was 4 PM by the time we reached there. We dropped both our guests to their hotel rooms and then went to ‘Eden Jungle Resort’. We rested for a while at a comfy hammock of the hotel and then went to the beach to see the sunset. Then, we strolled around the places in the evening. After that, we went to see the cultural show at the Tharu Cultural Center. The Tharu stick dance and the crazy peacock dance were two main attractions of the center. We also tried to imitate the dance steps. Then we had our dinner, followed by gossips and a deck of cards. We played cardstill 2 am and were forced to go to sleep because of the power cut.

The next morning, Awanish came up with the plan for the day which was Jungle Safari and boating .We were all set for the day’s adventure by 7 AM. We were fortunate enough to see one horned Rhino early morning even before commencing on the Safari. There were crocodiles all over the Rapti River. For some, it was the first glance of the crocodile and looked really excited. Beautiful birds on the way were bonus. The guide was recalling the names of all the birds but we were not sure if he was getting them correct or just bluffing. And just for the record, I can hardly remember any names. Among them, the immigrant birds from Siberia caught my notice. The guide called them illegal as they travelled to Nepal without any visa. Then we got off the boat and headed towards the jungle. The guide really bored us by only showing the footprints and dung of different animals. Finally there was a sign of relief on the guides’ face as we saw a python, yeah a real life long python.

Then we set off for Kathmandu. There were some dance numbers playing in the van and we could not stop our feet from dancing to the rhythm of the music. Also we sang the song in a group. Then we stopped at Dashdhunga for lunch. As food was not ready, we had to wait. So we decided to play a Holi in Narayani River nearby. We put colors, splashed water and also mud and sand at each other. After playing for an hour, we moved back to the restaurant, very tired and starving. But sadly, the food was not very good. Again we continued our journey back to Kathmandu with some sentimental numbers but the excitement was not over. A huge match against Hong Kong was awaiting us that evening. That was a historic day in the field of the Cricket as our nation was playing its first ever T-20 World Cup.

On the way back, our van was attacked by some drunkards as a result of which one of the side mirror was broken, and we reached Kathmandu later than expected. I along with my friends then hurried to Basantapur where the live match was publicly broadcasted. With all the sufferings at bay, we got back home happy as the match ended with the historic win for Nepal.

We started our journey at 6:30 am early on Saturday morning.

The reason this hike was called special is because we had Jeff’s mother and father going with us. In spite of going from Naubise to Malekhu then Chitwan, we decided to take the longer route from Naubise to Daman and then to Hetauda and Chitwan. Since the day was Saturday and was the day before Holi, the children were throwing balloons and splattering water on the bus.

We had our bus stop at Daman, and had our lunch there. Soon then we travelled to the Hetauda through Simbhanjyang. Since we had the best photographers in Awanish and Kanchan from Deerwalk, we had lots of pics taken. As we headed towards Chitwan, the temperature there was a bit acute compared to Kathmandu, as a result we had some crunchy Chocobars.

We reached Chitwan at around 5 pm and checked into a hotel. We watched the popular cultural show of Chitwan called the Tharu dance. Dancing with other people was great fun. As we were back in the hotel and busy playing cards, some of us were planning the things to do on the next day.

We got ready for the hike to the Jungle as soon as we woke up early the next morning. As it was Holi, after the hike we bought some colors and got into the festive mood. The Nepali cricket team was playing its first ICCT20 World cup we were in a hurry to catch the game. On the way back we played Holi on the banks of Narayani River and I must say that was really fun.

All in all I had a great time.

6 thoughts on “Hiking from Sauraha West Jungle to East”