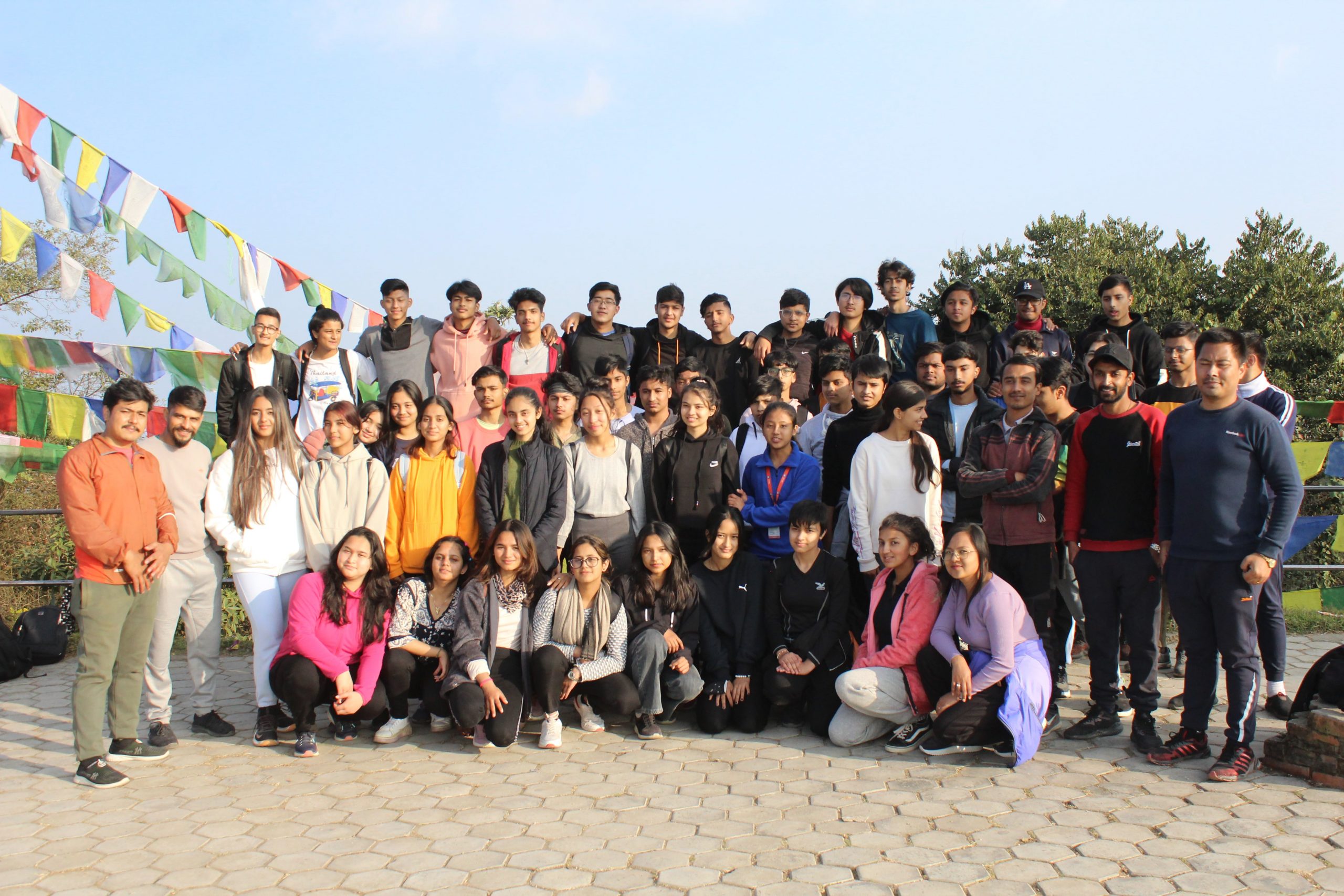 People say that walking on foot tires them out but when we work hard to get something, the experience we gain gets more valuable. Walking by yourself is nice and peaceful but the real fun of the trip is the smiles and laughter that just makes us forget how tired we really are. Someone wise once said, “The best view comes after the hardest climb “but our hiking was not that difficult yet, I believe we got to see the beautiful mountains, hills and nature at its finest. Narrow sandy land we had trouble walking in, stairless hills which made half of us slip, Gravels and rocky road which made our legs ache and the height stairs to go up a view tower which most of us imagined falling from while climbing down, all made us feel braver and made us feel like we conquered something that day. The difficulty of the hike was average. It had ups and downs but for the most part, it was a shallow slope along the road.

That morning was different. Instead of getting back to bed rolling into a burrito and not wanting to wake up, most of us were up on the first ring of the alarm. We were excited. Although the morning was cold and foggy, we still put on thin clothes with layered tops, thinking ahead when the sun really shines and the day gets hot after hours of walking. Even the sun looked brighter than on summer morning when it showed its face. Walking to the deerwalk complex and seeing all of our classmates, some familiar, some not, encouraged us even more. Remember when we said it would get more chaotic? Well… this was just the beginning.

The feeling of going on a trip started when we sat on the bus and it started moving. Singing, dancing and shaking the bus wasn’t bad at all. It made us even more enthusiastic although we were careful to not drain all of our energy before the hike even began.  We then reached our first destination. It was a well-known historical site called ‘Sali Nadi’. We were planning to start our hike from there. But before then, we explored the place and took some pictures. We were careful to not take too much or else it might just take up all the storage. When you are interested in something, you often lose track of what you are doing. In this case, taking pictures was the main priority to most whereas some were content with exploring the area.

Now we were preparing for what we came here for, Hiking. The starting point from ‘Sali Nadi’ to Nagarkot sounded simple but it was not as simple as we got more information. It was about 15 km approximately. We then started walking from our destination enjoying the natural beauty. Being under nature surrounded by greens below our feet and pale blue sky with fluffy clouds made us feel calmer, like we just left our world and came into a different dimension. It felt like we were so connected with nature and were in a place where there was no one except us. Throughout the walking period, we didn’t realize we walked around 7 km. There was a slight difference in flora and fauna after that height. Friends cracking jokes every now and then, laughing while teasing each other and telling each other why our bag looked like it just ‘ate at a buffet’ was the best thing which will be in memory even after the faces are forgotten and when we drift apart.

As we were walking, the sun was too shining and facing us, which made us sweaty and tired. But we were determined to complete the hiking so we made a plan to sit down and eat in order to maintain our energy level.  When we were finally sitting down, fatigue hit us like a truck. We were laying on the grass breathing heavily. Some were on the way, yet to reach the picnic spot, whereas some were already done with their meals and getting ready to continue their journey. We took a break which lasted for about half an hour on Nagarkot bazar.

We enjoyed the beauty of nature. That’s when we realized how underrated nature is. The clean blue sky, sun shining through the crack of the trees, plants and leaves waving in the wind. Animals enjoying their habitat, Water so clean that we could see the bottom and the mountains unblocked by the cloud showing its peak. It was all so beautiful to the eyes. They say that beauty lies in the eyes of the beholder but I guarantee you that no one can ever say this place is not close to paradise. We saw flora (bamboo, herbs, Salla, Pine) and fauna (Cow and goat). A friend warning us to be careful of stinging nettle (Sisnu) while we walked was so sweet and comforting.

Again, we continued our journey to Nagarkot. We travelled a way through the forest. We got a chance to enjoy nature by listening to the sound of birds and feeling the cool air. We were nearing the Nagarkot View Tower. We saw an army base camp where we are restricted to go. We saw an army battalion performing their task. We were both nervous and delighted to see the army training field. Nervous on how to act when we see a disciplined army and delighted to see something that felt so illegal to see. We saw the training ground where armies were practicing their shooting skills. They requested us to not take pictures and out of respect, we obliged. We talked with the army and they even helped us find the shortcut to reach the View Tower. Some of our friends were saluting the army out of respect which they fortunately, didn’t mind. Seeing them practicing all day but not looking gave us energy. “Why are we youngsters tired if they aren’t?”, we thought as we walked with full power. Finally, with our energy and hope we completed our hiking by reaching Nagarkot View Tower.

After we reached the destination, we looked around in awe and fascination. Some had already been there whereas to someone, it was their first time. Some were also scared of climbing up the tower. Teachers were encouraging the students to climb up and luckily, most of them did. Some made bracelets as a souvenir whereas some were laying their head down and resting. Climbing the tower didn’t seem worth it but it was a good show of their bravery. It was merely the way to show how tough we were and us conquering our fear. Overall, the time we spent there was pleasant and lively.

After we enjoyed the view from the tower, we were exhausted. We took a group picture which you see on the top. When the bus came to pick us up, we were barely able to walk. It felt like we couldn’t move anymore with how tired we were. Then we were taken to the food land. We sat down and had our own Thakali Set. We felt like we were just plugged out of the charger with a full battery. We were ready to spend all of that energy again. After resting in the bus for some time, we again started dancing, singing. The funny part is that when mostly everyone was dancing, some were recording whereas someone was in a serious discussion about something in the backseat. It was a little funny to see people enjoying themselves in different ways. Even if they were not dancing or singing, they were so happy.

We reached our initial point but the sun was no longer shining but the moon, happily smiling at us. Although the bus had already stopped, it didn’t stop the students from having fun, dancing and shaking the bus. Getting out of their own bus, some of the people even joined them. We then all went our separate ways, to meet the next day, to talk about yesterday when we met again in the classroom. We enjoyed hiking a lot and it was a great time.

To get something, we must search. The search isn’t over yet. You might think that you will never go to another event like this again but, if you take it as an opportunity and keep on exploring, you might just love the idea of hiking in the future. Getting to a conclusion after a first try is not ideal. Overall, Hiking is a great way to be connected with nature. In this world of technology, where most of the kids don’t see light anymore, hiking is a great way to get disconnected from the virtual world and get to enjoy what’s around you. Every tale has its start. You never know if this is what will inspire you to continue climbing! This hike is the best for beginners who want to take their time walking slowly.