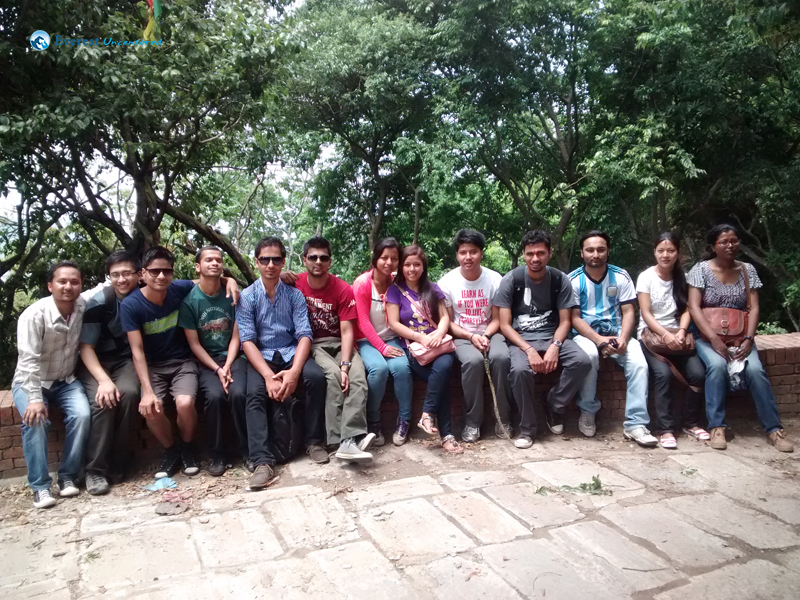 Arun Paudyal
The sky was still covered with dark patches of cloud when I reached Deerwalk office premises. Finally everyone gathered and the van departed at 7:45 AM. The journey geared up with few bites of Snickers. We picked up Regina on the way and there we were, 14 in total. The inner ambiance of the van was really heating up with funny chitchats and the song “ma ta babaal jhyaap, ma ta fittu” on the audio player.

After around 40 minutes drive on Jorpati-Sankhu highway, we reached the starting point of our hike, Sankhu. Sankhu is a beautiful place with some typical Newari localities, farmland, and lush green hills.

Sankhu is a beautiful place with some typical Newari localities, farmland, and lush green hills.

After breakfast, we were all set to start. The sun was scorching bright right from the morning. We proceeded ahead with some clicking of photographs and chitchats. The way was uphill accompanied by paved stone ladder. It was great talking and climbing at the same time. Some fellow hikers were really keen at taking their photographs at every instant of the way and lost the pace with fellow hikers. Snickers, Lays and the water were fueling us. We had plenty of snaps and videos at various stages of the way. Finally we were at our destination, Bajrayogini Mandir. The temple was elegant and situated midway of a hill. We took rest for a while there. The ambiance was really cool. The surrounding view was really mesmerizing. Some of our fellow hiker tried and succeeded in coming out of an artificial cave with very narrow opening. We took couple of snaps at the temple premises and eventually planned to return. Though the hike route was small, it was fun at the end of the day.

We boys were making fun of the name “sali” in reference to the girls in the trip. We were en route to Durbarmarg for our lunch. The van was once again filled with the fun-filled yet ebullient song “ma ta jhyaap, ma ta fittu”. After lunch, our hike officially came to a refreshing end around 2:30 PM. This hike was short lived but happily celebrated one.

Kamal Pokharel
May 25, 2014, It was my first hike from Deerwalk. I was very excited for it. It was organized by CAC club of Deerwalk. I arrived at Deerwalk at 7:00 am. At 7.45 our journey began. We stopped at Sakhu where we had breakfast. We started from Sankhu and reached Bajrayogini Mandir. The art around the temple was really amazing. Some of our fellow hiker worshiped at the temple. We took tika (not Prasad ) from them. There was a small cave in the temple where people made small opening. People believed that, one who is unable to come out from that hole was a sinner. Some of our friends succeeded in coming out. There was next temple just above Bajrayogini, we went there and spent some time in the area. We enjoyed the natural beauty of the garden. We took some group photos and returned. While returning back we planned to reach till Sali Nadi. We were excited to see the Sali Nadi because it is mentioned in Swasthani Barta Katha(one of the famous holy books). The flow of water in the river was not as expected. In the bank of Sali Nadi people were planting rice which reminded me of my village. Finally at 2.30, our hike ended with lots of memories in our minds.

64 thoughts on “Hiking from Sankhu to Bajrayogini”