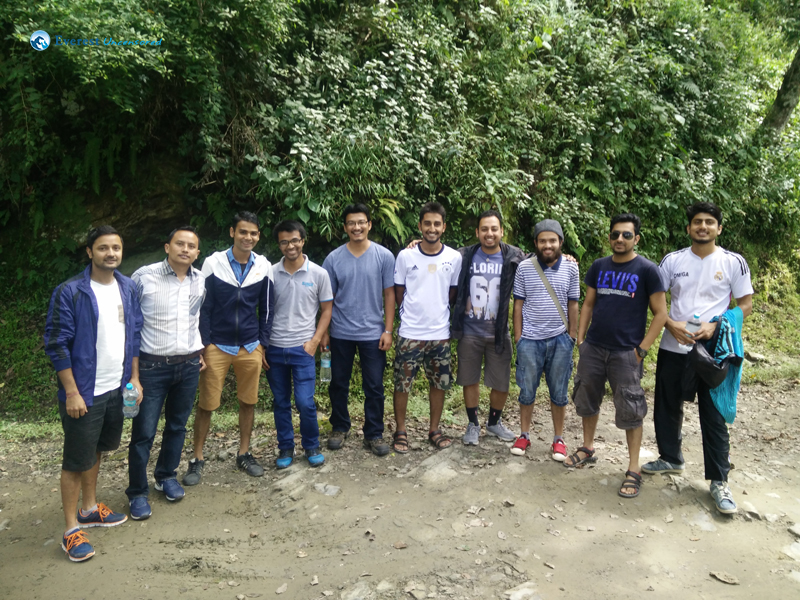 We had already set preparations for hiking to Kulekhani the very other day with so much of excitement and mindfulness of making moment wild together.

In the morning, I hear a heavy rainfall outside and was disheartened. How can I let those imaginations and enthusiasm die without getting started? So, there comes a thought indeed, “I don’t make preparations, I live what it comes”.

In the morning, I hear a heavy rainfall outside and was disheartened. How can I let those imaginations and enthusiasm die without getting started? So, there comes a thought indeed, “I don’t make preparations, I live what it comes”. Call few of the hikers; they too were worried about the weather having thought that hike will be postponed. Luckily I was able to encourage them and headed towards the office and begin our ride at 8:00am.

Most of the hikers were picked up on the way. Riding down the countryside was awesome when excitement stated reaching up to its peak. Listening to those old romantic songs played by Purna dai was certainly not enjoyed. Suddenly dari budo started cracking jokes and all of us laugh out loud. The humor was so sarcastic that some of the friends had to rinse their mouth and hands in bagmati for sins done during their stay in America. There was no obligation for anyone to use their Right to Speak. This factor makes the hike wilder. The view on the way was magnificent green hills, dense forest as well we had the pleasure of seeing the Ganesh himal.

All of us were extremely hungry so we decided to have breakfast at Pharping. And again our ride begins through the muddy alleys to dam side. After traveling for about 3 hrs we reached Kulekhani dam side. The real fun begins after getting off at entrance gate of dam and started walking watching the panoramic view of Kulekhani dam. I assume no one has seen heaven but if you want to be blessed even with a little part of it then Kulekhani dam is the best place. A combo of greenery, blue sky reflected in the serene lake. The environment was so peaceful and calm that we forget all the tiredness felt while walking.
Loathsome hike of about two and half hours was already cramping our legs and making us intensely thirst. No water could have filled that thirst except a chilled beer. Wow it was amazing; we could feel the beer going down to our throat and helping us to relax. After a small drink had our lunch, fish was absolutely delicious like often we say mouth watering. Still major part of our hike was remaining; I didn’t perceive completeness in hike. So, interested and obviously the daring ones decided to go for boating at Indrasarowar lake while other stay in ground doing friendly chitchats. Though some of us seem to be scared while paddling but we manage to make it a wonderful highlight of this hike.

Around 4:00 in the evening we return back from where we begin. Overall, Kulekhani hike was an incredible experience. Young and wild guys together make it memorable. I took some memories for lifetime like the view of tranquil lake, exquisite fish, the divine connection between abyss and heaven, dari buda non-veg jokes, pm poems, lm blabbering like a crazy dude and me witnessing all those stuffs hiding it into my memories album.

Finally, the day had come for my first hike from Deerwalk. There was something nostalgic about that day like it was going to be one of my best days. The day didn’t start well as it was raining outside but it didn’t deter my determination of going for this hike. Thus, I quickly got ready and headed towards Deerwalk. The hike destination had been predetermined as Kulekhani which also added more excitement to the hike as it was also my first visit to Kulekhani.

Once I reached Deerwalk I met our Hike Coordinator Pawan then we had to wait for some of our colleagues before we could start our journey in the Deerwalk Van. We also had to pick up some of our colleagues on the way. We left the Deerwalk premises at around 8am. Our primary route was Deerwalk – Baneshwor – Thapathali – Kalimati – Balkhu – Chobar – Dakshinkali – Pharping – Kulekhani. The real journey began once we had picked up everybody from their respective stops. We knew that this hike would be successful once we found out that the rain had stopped. The only disappointment was that two of our colleagues couldn’t make it due to their injury and sickness but it didn’t stop our enthusiasm.

Our initial checkpoint was to reach Pharping to have our breakfast before commencing our hike. Everybody was hungry even before we had reached the half point to Pharping. The first part of our hike was highlighted by Bagmati and USA, The Beard and The Goat. Jokes were flying around, laughters never stopped and everybody were enjoying their time as if they were back to their college days. There was no work pressure and only fun in everybody’s minds. On the way to Pharping we also saw the beautiful Tuadaha Lake of Kirtipur and we were leaving the beautiful Kathmandu Valley behind us. Finally, we reached Pharping at around 11am then we had our breakfast and were ready to head back to our journey. But a small confusion arose as to which way we should take to reach Kulekhani. Initially, we were supposed to go through Sisneri via DakshinkaliTemple but we found out that it would be a tough climb for the van so we decided to take the alternate route through Fakhel.

Our next checkpoint was to reach the starting point of our hike. Now the highlights of the second part of our journey were the beautiful hills covering the valley, the tight snaky roads and dohori joke songs and the feelings shared. We were thankful that it didn’t rain in these region because if it had then it would have been very tough to travel through the muddy snaky roads. It was not like we had not seen those beautiful hills but still every time I see them it dazzles me as if I was seeing them for the first time. In between the jokes and the laughters, many feelings were also shared about the crushes and the interests outside and inside Deerwalk. People were singing, teasing each other and were just truly enjoying the moments. Photos and videos were also being taken time and again to capture all those exciting memories. Atlast, we passed the Fakhel village and we reached the starting point of our hike at around 12pm. Everybody got off the van and got ready to start the long awaited hike to Kulekhani.

Our last checkpoint was to complete the hike and to reach the Hotel in Markhu village where our van was waiting for us and also where we were going to have our lunch. Due to the long drive the energy given by the breakfast had already diminished and everybody was already hungry. The highlights of our hike were the beautiful Kulekhani Reservoir, the songs and the dances, the photo sessions, the cold breeze and the delicious fishes we got to eat. Throughout this journey, the jokes and the laughters never stopped. It escalated more and more as the journey progressed. We saw the huge Kulekhani Dam and also the vast and beautiful Kulekhani reservoir. We stopped time and again to feel the cold breeze and to take the photos. We walked along the long stretch of the reservoir via the hilly roads. We also danced and sang songs about the excitement we were having. Then after about 3hrs of hike we finally reached the hotel. We got fresh and had a light snack with fried fish. After sometimes we had our lunch with the delicious fish curry and then went down to the lake side to rest and also to take some more photos and videos. There was also boating service available and some of us went for the boating and remaining including me stayed behind to lay down and rest in the green grassy plains. It was just a beautiful sight all around the area. After everybody got together, we took a quick group photo and we got into the van and headed back home at around 4pm.

The hike had ended successfully and everybody was in the van heading back home.

It was one of my best days and now only thing left to do was to store it in my memory and return home with the best feeling I could have had.

It was one of my best days and now only thing left to do was to store it in my memory and return home with the best feeling I could have had. For returning back home, we took the Sisneri route since we wanted to view new sceneries. It was all beautiful and dazzling views until it got all dark and foggy. We also worshipped to Goddess Dakshinkali on our way back from within the van. Then we finally reached Kathmandu Valley at around 7pm. I got off in Thapathali and then went back home hoping to travel to more new places with nostalgic feelings in coming future.