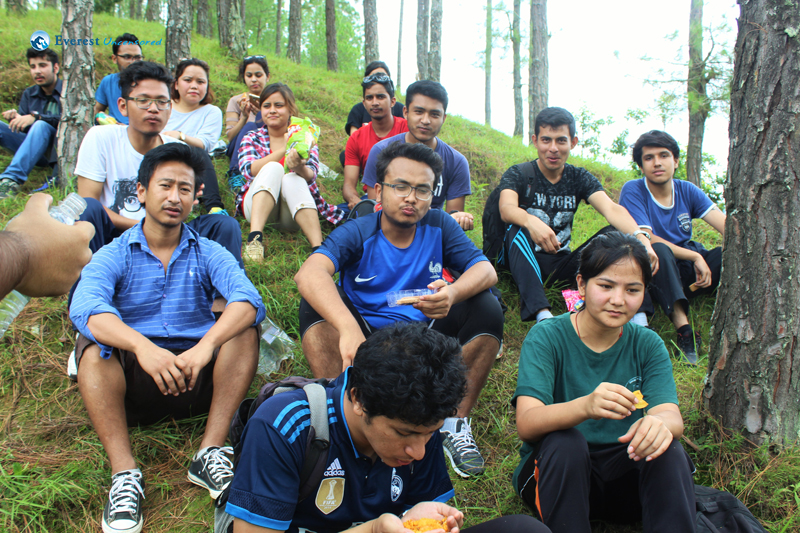 It is the first hike I attended as a Hiker, not as a coordinator. It’s been a year and a half since I joined Hiking club as a member. Though I joined as a hiker this time the whole responsibility of the Route ultimately fell over me.

College van dropped us off at Panauti Bus Park. I was planning to take the route of Khopasi rather than regular route that takes us to Namo Buddha. We would’ve had to travel the vehicle route if we’d followed the regular one and hiking would not have been fun if we had followed that track. We talked with the locals, but they suggested us to go through the regular path as it was easy for us to reach Namo Buddha.

Being completely honest, it was very boring to walk the black topped roads where we had to hear the vehicle passing by regularly. Everybody was disappointed. So on the way I consulted some locals and according to them we had to return back and start again to travel through Khopasi, but reaching Balthali was possible from there. Balthali was our next planned route as we had planned to reachBalthali via Khopasi. It was a good chance to take the off track for an adventurous hike.
I asked many locals on the way about the best route possible and most of them suggested the regular one only. So I started asking about how to reach Balthali rather than Namo Buddha. Finally somebody spoke “It’s possible to reach Namo Buddha by hiking through the hills rather than following the vehicle track.” We left the road and headed towards Balthali. Road towards balthali was off road and a little bit more adventurous. We caught the small track which lead us to the jungle which was very green and beautiful.

As we all know it’s the monsoon season currently, but fortunately for us the weather was mild. The sun wasn’t very strongand it didn’t scorch us, and neither did the rain wet us. I was amazed by the view that surrounded our track. Grasses were green, big pine trees, Grazing cattle, sound of birds, everything was awesome. The company was also very good, No one walked slow or got left behind.

I could’ve been have lost there in amongst the beauty of that nature, it was like living in dreams. We walked a lot of green fields, hills, forest, paddy fields, narrow paths, etc. I wished that path never ended. After walking for some hours we saw the hill that had a lot of “flags and Dhowajas”(Buddhist). We were sure that that was our final destination.

Everyone who wanted to travel the paved vehicle road started praising the path. Road was parallel to us on the plain and we were at the hills feeling the cool breeze and romantic atmosphere.

Walking the uphill to reach Namo Buddha was tiresome but that pain vanished when I saw the first glimpse of the Gumba “Namo Buddha”. When I entered the Gumba, I felt like I was living one of my dreams. The monument was incredibly beautiful and the intricate designs had me in awe of that moment.
It was already too late and unfortunately, we couldn’t stay there for much longer as we had to hike to our college van which was waiting to pick us up. So reluctantly, we bid farewell to Namo Buddha.

It was a fun experience which taught us that sometime not following the common path and taking risks is worth it in the end.

Cold wind gushed through the windows of the Micro van as we set full speed to Panauti, our start point for the hike. A total of 18 students from all four batches, left the Deerwalk Complex at 7am to begin the day long journey of excitement, fun, and adventure. The Monsoon season is in top gear with heavy rains throughout the day in the past couple of days. All of us were in full gear, ready to drench in the monsoon rain, but luckily it didn’t rain that day. In fact, it was the perfect weather for a hike – sky full of clouds and no sign of rain or sun.

We reached the Panauti Bus Station after an hour long drive, and everyone gathered around to set the feet into motion. For the first 30 minutes of the hike, we hiked through the main road, which was not what I was expecting. Huge lorry tracks drove past us pushing us towards the edges of the muddy road. After walking for the half-hour, we finally took an off-course up into the mountains.

Our final destination was Namo Buddha, but we wanted to take a detour through Balthali. Along the way, we asked the local people about the Balthali-NamoBudda route, but many of them suggested not to take the route as they feared we might get lost. But, despite their warning, we were determined to take the detour and set in along the route.

After a certain distance, we abandoned the muddy track and took the trail through the mountains. As we walked up the steep and slippery trails, I thought to myself, “Finally, some real hiking.” As we moved along the trail, we traveled up and down many mountains. We walked on narrow trails carved around gigantic mountains. The paths were very slippery due to the rain in previous days. Each one of us planned our every next step to avoid slipping. “One wrong step, and I would end up in the stream 100 meters below.” I thought to myself.

Along the trail, we came across many local women cutting grass for fodder. Occasionally, we asked them directions and we were greeted with smiles. We also came across a herd of goats, who walked along with us for some distance.

Up in the mountains, we were awed by the majestic beauty of the mountains in the monsoon season. The mountains were covered lush green trees, grass, and paddy fields. It was soothing to the eye.

Half through the route, we stopped by a flat land to rest and have snacks. There was a locally made string tied to a tall tree, and some of us gave it a try. After dwelling for an hour in the location, we again set into motion.

Our destination, the Namo Buddha Monastery was visible across a couple of mountains. After the light snacks and rest, and seeing the destination up close we felt energized and excited to reach the destination.

The route was all uphill from that point and most of us got tired very soon. We climbed up the lush green grass covered mountains until we came to a small community school. We interacted with the students over there and clicked some photos with them. The monastery seemed closer from that point but we still had a couple of mountains to climb across. Some of us started feeling frustrated. The destination seemed closer but yet far.

After the ascent of two mountains, we finally reached the monastery. When I saw the majestic monastery for the first time, I felt the hardship was totally worth it. As we stepped into the monastery, the first thing most of us noticed was how clean it is. After some clicks in the premises, all of us went to the prayer room on top of the Monastery.

The big hall was decorated with “Thanka” Paintings, and beautifully carved sculptures on the pillars and ceilings. Upfront, there were three big gold statues of Buddha, and the room was circled by prayer desks. All of us prayed in the hall and wandered around with awe gazing at the artwork and felt in peace with the serenity of the place.

After spending some time, we finally set back to Kathmandu. We walked down the hill until we met the main road, where the Deerwalk vehicle picked us up.

One thought on “Hiking from Panauti to Namo Buddha”