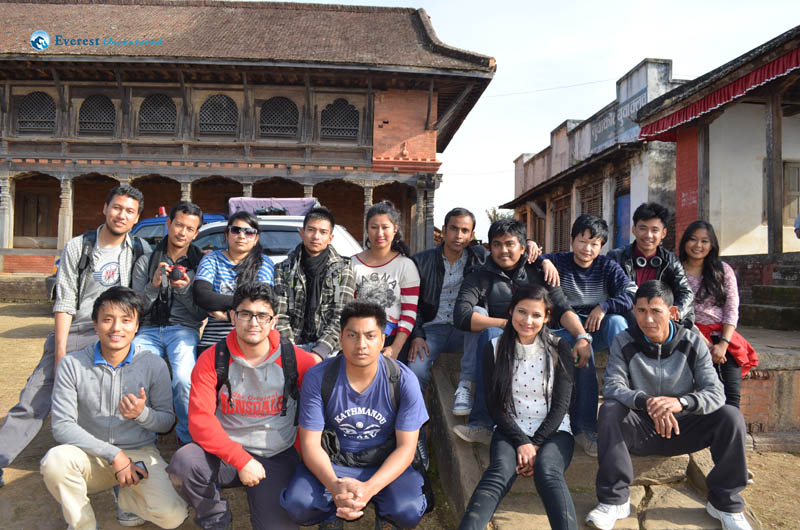 Buddha Shrestha
After working together for more than a month we (all the trainees) were very excited for the hike to Nuwakot. Even though we had known each other after joining Deerwalk, but still this was a great opportunity for all of us to get to know each other and become even close. Sure, we wanted to make this hike a memorable one.

I woke up at about 6 in the morning, which I rarely do. Everything was dark outside as I looked through my window. I thought it would be late so I grabbed a quick breakfast and ran outside to catch my bus to Deerwalk. As I went outside, I saw many people walking by. Some were jogging, some were carrying vegetables and headed towards the Tarkari Bazaar and some were headed to the temple, which made me feel a bit lazy because usually I would have been in my bed at that time. After jumping onto the bus, I reached Deerwalk at around 7:15 am, and I was happy to see all of my friends who had agreed to come there. I was thankful that our friends had already bought all the foodstuff that was necessary for the day, so that we would not waste any time in shopping on that day. Still, we had to wait for a while there because our bus had not arrived yet. After waiting for about 20-30 minute, we were happy to see our bus arriving and we wasted no time to get on it and waved good-bye to our guard-dai and headed to pick up our friends Anjana, Anup, Prerana and Shraddha at Balaju and at about 8:15 am we formally began our trip. Usually we would have played the songs that were on Rabin dai’s playlist, but we decided to use our own vocals that day and play antakchyari, dividing the teams according to the rows. It was real fun to play antakchyari, which my friend Bijayshri seemed to be excellent at, mostly because she had a huge library of Hindi songs within her, and also a good voice.

It was quite amazing that we had not even reached up to an hour mark and we felt tired of singing and felt hungry. Thanks to all the Pringles, Chocó Pie and Snickers. We carried on our journey with our fully satisfied stomach. Probably it was good timing that while we were having our snacks, just after playing the sing-off, we saw beautiful natural sceneries of mountains and hills where the sun had just started to lay its effects on, making a pleasing contrast to our eyes. Well such scenes were really refreshing and rarely seen in the city, where we are used to pollution and garbage on the road. Soon after we stopped at a local hotel for tea and clicked a few pictures there.

Carrying on, we saw the beautiful Trishuli river along the way and we were hopeful that while returning, we would go and click some pictures there too.

Carrying on, we saw the beautiful Trishuli river along the way and we were hopeful that while returning, we would go and click some pictures there too. Well, I need to say, the roadway to Nuwakot is not smooth as the other highways, and the roads are really narrow and bumpy. I suggest from my personal experience, not to sit on the back seat because you would be jumping up and down from time to time 🙂 . Nevertheless, we reached Nuwakot at around 11 am and stopped at a local bhojanalaya to have our favorite Dal-Bhat-Tarkari. The food there was good, similar to the one we would have back in the city. Well, also Nuwakot was the hometown of Rabin dai so he decided to meet-up with his family and have lunch there and agreed to meet us at the Nuwakot Durbar after the hike.

Now, after our lunch, we officially began our hike at around 11:45 starting from Trisuli Bridge. Arjan had already hiked to Nuwakot Durbar before and he knew the routes, so we followed him. I have to say, the initial phase of the hike was a bit steep and so we climbed up the hill slowly. It was quite different and a refreshing experience to be sitting on the chair and working on our computers than to be hiking on a natural environment. We sweat a lot and drank a lot of water in between and thanks to Red-bull we kept our energy level high. Along the way, we took a lot of photos and some of them were really funny, especially the ones where all of us were tired of walking and had our own weird expressions of showing so. After walking for more than an hour an half we saw a glimpse of the Nuwakot Durbar, which by the way looked absolutely beautiful. Soon we reached there, and we were surprised that all of the locals were getting ready to attend some sort of function or something. For a moment I thought they were waiting for us to arrive. But what a coincidence it was Prithivi Jayanti that day, which none of us had an idea about. That made our hike even more interesting and the Durbar even more valuable in our eyes. As most of the natural heritages does, they gave us a discount by showing our student card and allotted 15-20 minutes time to visit the whole palace. The architecture and outside beauty of the palace was really immaculate, but there was really nothing at all inside. Mostly, all the rooms were empty and some had old statues of King Prithivi Narayan Shah. We asked the guide why all the rooms were empty and they told us that most of the things were kept at the Hanuman Dhoka Museum and will be brought back soon. Well the main beautiful thing about the palace that I liked was the rooftop where you could watch the 360 degree view from the hill. Logically, it was used to watch who were approaching the Palace from every direction. Obviously, we did not miss-out on taking photos there too.

After visiting the Durbar, we met Rabin dai, who suggested we should visit the Bhairav Mandir which was about 1 minute away from there and so we did. But sadly, the temple opened only in the morning and so it was closed then. After a long hike, visiting the Durbar and spending some time there, we decided we should head back to our bus. It was almost 3pm by then. While returning back we saw former Chief of Army Staff of the Nepal Army, General Rookmangud Katawal as a chief guest of the local event and so, the security was high there and we could not take pictures where we thought would be a great position to take on. Returning back to our bus, I sincerely thanked King Prithivi Narayan Shah, without whom we would not have been able to be proudly call ourselves NEPALI and felt that he would surely not be happy with the position of Nepal is currently in.

Well, that was almost it, the hike was complete, we were on our bus, all tired and had memory full of pictures. It was really nice experience to hike with all of the my newly made friends here at Deerwalk. We were a little late on time, so we could not go to the Trishuli river, but still we stopped by a waterfall where the view seemed to be amazing. The way to the waterfall was a bit tricky one, but still we reached there, and seemingly took pictures there too. Then we stopped by at Rani Pauwa to have some snacks at about 5pm. Again the sunset made the mountains look amazingly beautiful and we all enjoyed it with a warm cup of hot lemon there. After having some snacks we had some energy left in us, so we decided to sing some songs. In doing so, Dibes showed us that he is a really good singer and a lyricist as he sang some of his self-composed songs. So soon enough, we reached Balaju, back to the point where we started our journey. Rabin dai dropped off each of us to our destination and each of us waved goodbye to the others. At around 7 pm I reached my home, Kalimati, and while dropping off from the bus, I was really thankful to Deerwalk for providing us with such a glorious opportunity, which I will always cherish. I also was very thankful to my friends Anjan Rai, Anup Shrestha, Anjana Puri, Binod Rai, Shishir Rai, Prerana Shakya, Ritesh Shakya, Saroj Ghorasaini, Dibes, Shraddha Shrestha, Sudeep Shrestha, Arjan Maharjan, Bijayshri Barun and Rabin dai for making this hike a really memorable one.

Sudeep Shrestha
Seeing my name in the hikers list, I was very much excited and was awaiting for that day: January 11th, 2015. But, had some fears for the problem in my fractured leg. Now it’s the day for the hike. We started our hike by taking pictures on micro and picking up hikers on the way, most of hikers including me were in empty stomach so we took some junk food (pies, chips, and juice). We headed towards our destination taking the pictures of beautiful mountains and scenery, and by singing songs and playing (antakshari). Mainly songs were dedicated to loved ones and jokes cracked along the way by listening complains from back seated hikers and interchanging the seat plan. We took our lunch at Trishuli.

After lunch, here we go, tight up for the hiking, walking through a ladder step towards the Nuwakot Durbar, heading towards with more laughter and taking a rest and clicking pictures. After some time we found our way slippery and steep along with making our bonding of friendship stronger &enjoying the beauty of nature in cool weather. We took rest for 20 minutes and enjoyed red bull time and real juice for the girls. While heading towards our destination we found the Nuwakot Dubar gate in front of us. There were some program about to start there. It is a coincidence that we hiked to Nuwakot Durbar in the occasion of Prithivi Jayanti.

After getting an entry ticket to Dubar we went upstairs seeing Malla chariot, maid room, and with the antique wooden art of shah dynasty, prison jail on top of the durbar. A place where armed armies stayed and weapons in the case of war. We took some picture of girls dressed in our national costume, made introduction footage of all members and that was fun because some of them were shy in front of the camera. After some time spent on the Dubar site, we walked towards our vehicle.

“EACH MOMENT IS A PICTURE THAT HADN’T SEEN BEFORE AND NEVER SEE AGAIN” so clicking picture was continued and we started heading to Kathmandu singing songs and composed own songs. Our driver brother had lost his wallet along with his driving license. That made all hikers doleful. Hiking trip came to an end dropping hikers on the way, gathering amazing experience, knowing the talent and secrete about hikers. It was a memorable moment that happened in my life.

27 thoughts on “Hiking to Nuwakot Durbar”