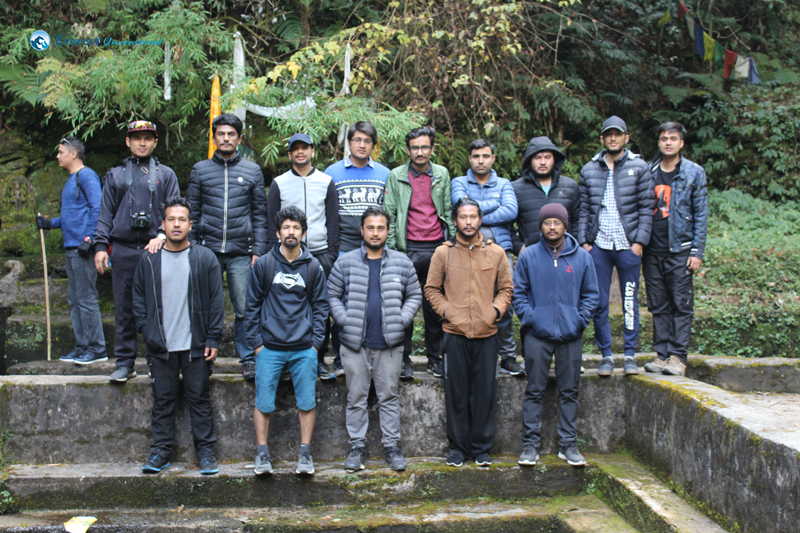 I’ve always been an avid hiker and fond of travelling through the jungle with country roads so I was waiting for this kind of adventurous hike with route Deerwalk- Budhanilkantha – Baghdwaar – Sundarijal inside Shivapuri Nagarjun National Park.

Shivapuri Nagarjun National Park is youngest national park in Nepal, which is established in 2002 AD. Youngest national park has covered 159 km² area including four districts Kathamandu, Nuwakot, Sindhupalchock and Dhading adjoining 23 VDC with entry gate from Budhanilkantha.
Along the beginning of cold morning on 2nd December 2017, We gathered at office premises according to our predefined schedule, at sharp 7:00 am. Within 30 minutes,collecting some dry foods, we all grouped together with and started our hike. The time was already 7:45 am, so we headed to Budhanilkantha, using one of the office van, which left us at Shivapuri National Park entrance gate. After having individual ticket ,the real hike began right after we entered the National Park premises. The cold weather inside the jungle was cheering us to climb up the hill.

We began our hike heading towards Baghdwar, the origin of Bagmati river. Country road was directing us deep inside the jungle and up the hill. We were following that road enjoying the nature, the chirping sound of birds, scurrying squirrels on the woods, fresh and organic smell of forest and the fascinating morning view of kathmandu city from the midway of hill made our hike much remarkable. After two hour of restless walk we reached to Nagi Gumba which is a hilltop Buddhist monastery where panoramic views of the Kathmandu valley abound. We had some rest there and took group photos too. Then climbed up on the right to Deurali Bhanjyang. The appropriate route signs mostly at the junction along the road used to route us in right way. We had a number of images captured with the greenery scenes inside the forest. Monkeys were teasing us from the tall tree‘s branches, but that made us funny in a way. Three hours of walk through jungle road led us to Baghdwar at about 2:00 pm, so historical place and natural source of Bagmati river. We were somehow tired up to this moment that’s why stood there for about half an hour. Being in nature decreases stress and tiredness so we took not longer time to be refreshed.

Now the destination was Sundarijal, to reach it before the sunset, we planned a shortest route so moved back down from Baghdwar. Somehow we managed to track right way for an hour down the hill but we lost it midway inside the jungle.

With a hope to reach the destination soon, we kept on drilling down the way inside deep forest.

With a hope to reach the destination soon, we kept on drilling down the way inside deep forest. Somewhere we looped too, but after roaming about two hour we finally able to reach a village named Okharne, at that time we really had a breathe of relief. We decided to have some snacks in that village hotel.The time was already about 5:00 pm so we no longer wasted our time and headed towards Sundarijal. The evening was becoming darker and darker.Following the country road down for about one and half hour, we finally reached to Sundarijal at 6:30 pm. Then our office van picked up us and we had dinner at Chabhil at about 7:30 pm and departed for own home taking the memory of adventurous hike.

2 thoughts on “Hiking from Muhan Pokhari to Sundarijal”