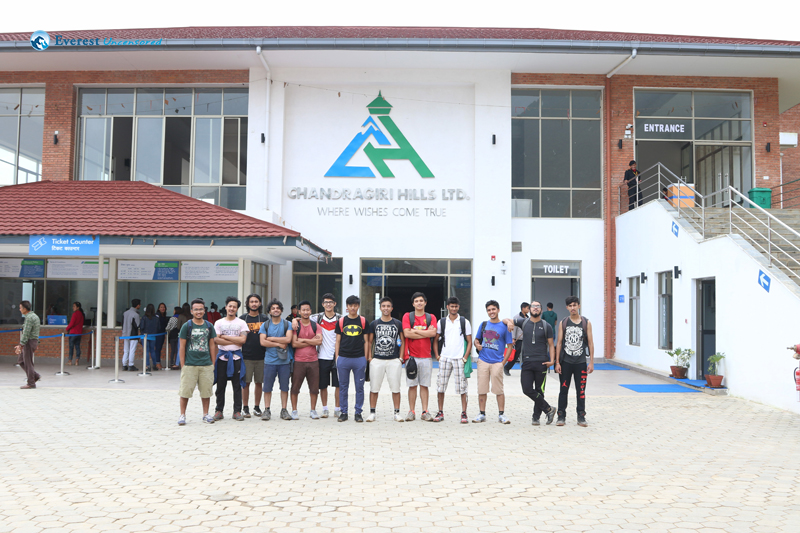 Chandragiri was the hottest destination this year. The newly built cable car was the center of attraction. I had planned for Chandragiri Hike not through cable car but through the hiking trails that goes through the Jungle.

The day didn’t start as planned; we were late to reach Matatirtha the point from where our hike started. After a short visit to the temple we walked towards Chandragiri.

We consulted with villagers to find the hiking route that we were supposed to take. It was the first time we choose that destination so no one actually knew the actual route. Villagers also were confused as they were hypnotized by the newly built cable car.

We consulted with villagers to find the hiking route that we were supposed to take. It was the first time we choose that destination so no one actually knew the actual route. Villagers also were confused as they were hypnotized by the newly built cable car.

We headed towards the jungle just to penetrate and reach the destination. It was difficult to choose the hill as its top was fully covered with fog. Half of the troop headed inside the jungle while we were resting for awhile. Suddenly all of them returned running back. “Hey, the route is covered with leaches each of us got at least 5 of them”.

That was the moment I thought that my hike was ruined as no one wanted to return back to the jungle but wanted to walk through the vehicle path. Walking the vehicle path is a hectic and boring part of hike. However seeing the cable car gave us a boost of excitement so we headed towards the cable car base station. After a short visit of cable car station we finally started our actual hike taking the route meant for the vehicles path. It felt a most boring hike. As the altitude increased, the weather more degraded, we still wondered if we were on the right track. The road was full with earthworms and bugs. Still we tried to make this hike “the real hike” by catching some difficult shortcuts.

Photographer friends that had brought their heavy camera thinking of capturing perfect shots were pissed off as the camera was of no use. They couldn’t capture the beautiful view of valley as they planned and imagined due to the fog that lay covering the mountain. Soon after a long four hours of hiking we reached the Hill station of cable car. It was a great relief to be there .However another problem strike, as no one wanted to move forward towards Pharping which was supposed to be our final destination. Our vehicle driver was already at Pharping waiting for us. After a dozens of calls we finally managed to call him back to our hikes starting point.

Cable car ride was the most relieving part. Everyone had a happy face when we finally confirmed that we were going back by cable car ride. The beautiful views from the cable car made the photographers happy. The constantly changing weather that we considered as a curse became the best part of the cable car ride. Kathmandu valley was beautiful as ever.

Summarizing all this It was quite an experience of mixed feelings and emotions. As usual we ended our hike with delicious Thakali.

Early morning, it was just around 6’o clock that I was already at the college for the hike. I was excited for the hike as it was full of people who were really fun to be around. As I sat there waiting, the first one to arrive was Abhisekh, he phoned all the hikers one by one.Some came late and some were on time, this was getting more and more common. After everyone arrived we went to Mama’s Pashal for a short breakfast. We started moving around 7:30-8:00. The Van Ride to the place was fun, singing, playing songs and teasing. But soon it was time to walk.

Bimal was the Photographer for the day, the photography had already started. We came to a path where the trekking to Chandragiri route started. As we went on we discovered that the path was full of leeches so we decided upon majority vote to take the vehicle route.

Bimal was the Photographer for the day, the photography had already started. We came to a path where the trekking to Chandragiri route started. As we went on we discovered that the path was full of leeches so we decided upon majority vote to take the vehicle route. We walked all the way to the base of the cable car station from where we could see the long distance we had to cover. We asked for the approximate time to reach the top but we realized it was not worth it as everyone had a different answer. So we just moved on after taking some pictures. If we had taken only the road it would have been a monotonous hike but we took several shortcuts which made the hiking experience more exciting and memorable.

We hiked for about 5 hours continuous to reach Chandragiri. The journey was fun with so many fun people all around. We reached the top and waited for the group to arrive, then we took a look around. It was a different place, I felt as if I was in another country somewhere. The view was covered with fog but the environment was so clean and refreshing. We stayed there for about an hour. It was then when we realized that we were running late, there was no option feasible to reach back home in time except to take the cable car down the hill. So after taking some final pictures we collected money, listed the debts to be paid, got the tickets, and headed downhill on the cable car. It was very relaxing as we all were tired, also we got a clear view of the scenery around us.
At the base station the college van was waiting for us. We got on the van and went back to Kathmandu, we had our lunch at a Thakali Hotel then went home. It was a great day with great peoples, Thank you DWIT Hiking Club, Cheers !