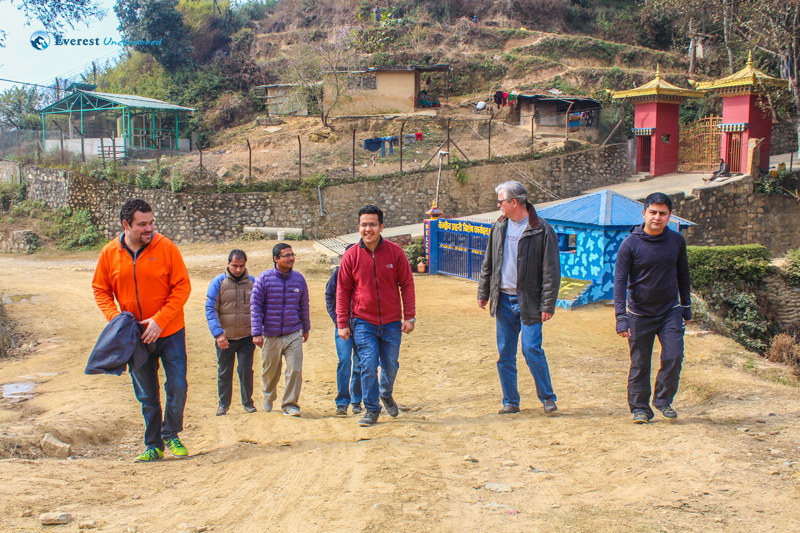 Abhinav Regmi
In spite of the ongoing, long blockade in the country, finally I got a chance to attend Deerwalk hiking with Bill and Jeff. It was a cold day, I reached New Baneshwor to catch office van at 9:05 am. No one was told about our hike destination by Pramod. Deerwalk van headed Kalanki to pick up Kanchan, Ashish and Kapil. Then, we moved towards Annapurna Hotel to board on Jeff and Bill, both of them were excited for the hike though they were too wondering about hiking destination. We then picked Randhir and Pramod at Ratopool. Finally, Pramod revealed the hike destination which was Kopan Monastery.

We headed towards the hike destination from Chabahil and finally, reached at the top part of Kopan at 11:30 am. Kopan Monastery is a center for Buddhist study, meditation, retreat, and practice. The monastery lies at the top of the hillside, northern of Kathmandu valley. We can see a mountain and valley view from the same place also many monks on the way. The local people were restricted to visit the place after it was converted to the Study Center. Afterward, we began our hiking from Kopan Monastery at 12pm. Jeff and Bill were scared about the route, whether they have to climb hills. We had some fun while walking in our hiking route. We stopped at one place and took a few photographs.

The views of the city were well worth the hike.

It was all very magical, as the clouds built up and gave us a wonderful dramatic sky for our visit.

It was all very magical, as the clouds built up and gave us a wonderful dramatic sky for our visit. After some time, we reached our destination Gokarna Sahid Smarak Park at 1:00 pm. There, we captured some pictures on the hill and rested in the open grass. Then, we moved to nearby Hotel for lunch and refreshment.

The hotel was nice, had an open area with garden. We had some snacks and drinks there. Bill and Jeff were sharing their experience making our hike joyful. On that day, I got a chance to learn poker with the team, which was quite exciting for me. They started playing poker with the chips distributed. I can recall the words like open, check, raise, fold during the time. At the end, Bill won all the poker chips by defeating all. Some of the hiking members took photographs in the hotel garden. After some time, our lunch was ready. Jeff and Bill were very excited to have Nepali food. We all had lunch together and left hotel at 4 pm. We, then moved to the Gokarna Sahid Smarak park to catch our office van and returned back with some really nice memories. On the way back, we talked about best actors, actresses and movies. Everyone was telling their own best. Overall, it was a memorable hike, which will be cherished by all of us forever.