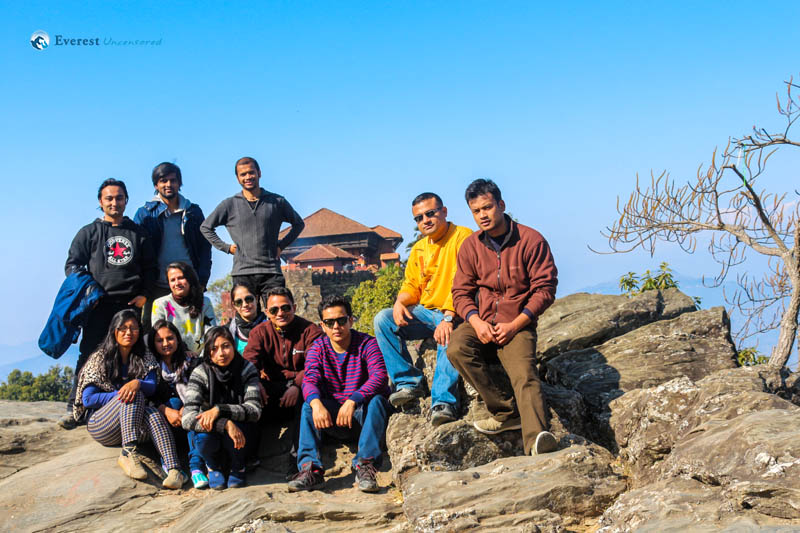 The place is situated on a small mountain at the height of 3500 feet and offers a magnificent view of the Himalayan Peaks known as Annapurna, Dhaulagiri as well as Manaslu Himalayan range.

Lujla Maharjan
Sunday, early in the morning I was ready for the hike to Gorkha. After all, who wants to miss a hike in such a beautiful place. We left office premises at about 4:40 AM and Deerwalk van picked up the remaining hikers from different places. Although, it was dark, cold and foggy morning I was so excited for the hike and so was the rest of the hikers. From the very beginning of the journey we were in a laughing mood either by cracking jokes or by compelling everyone to share their memorable moments.

We stopped at Naubise around 7:00 AM for “Cell Roti” and tea before heading further. We reached Gorkha earlier than expected. We started the hike from the Gorkha Bazaar. First of all, we headed for the Upallo Darbar, climbing up hills and several staircases with several queries and curiosities on my mind about the palace. Finally, we reached to the palace and the only word that one could say after seeing that palace at that certain height is “wow!!!”. The location of the palace is perfect for beautiful views of Mount Manaslu, Himalchuli and several other mountain peaks of the Himalayan Range. In the palace only one room was open for the visitors and that was the room where the Prithvi Narayan Shah was born.

There was a replica of Pashupatinath at the palace premises and a few steps from the main entrance towards the right lay the famous Kalika Temple, and on the way to “Siddha paaila” was a cave of Baba Gorakhnath. There were several ancient stone scriptures to which Kishor dai was reading with keen interest, but am sure he was pretending as if he could read them all. Then, we visited “Siddha paaila” from where Gorkha Durbar and awesome, breathtaking scenes of the Himalayas were seen very clearly and every one posed in different style for photographs.

After lunch around 12:30 PM we were all ready to visit “Ram Shah Chautara”. It is situated in a peaceful place with his statue. There is one popular Nepali saying, ”Nyaye napaye Gorkha janu” because Ram Shah used to give right justice to everyone in his “chautara”.

Although, it was dark, cold and foggy morning I was so excited for the hike and so was the rest of the hikers.

In the heart of the Gorkha Bazaar lies the museum in an old palace. The palace was built in 1896 BS and was known as Tallo Durbar (Palace in lower side) which was later transformed into museum. The museum encompasses a wide spectrum of historical artifacts dating as far back as in the days of Prithvi Narayan Shah and his predecessors. There were cannons, rifles, arrows, spears, and the traditional “panas”, “panche baja”, “chaityas” and other ancient relics with several paintings, horoscope, religious, economic gallery depicting the historical, religious, ethnographic, natural and other important objects. The major galleries which was most fascinating were Birth description record (Astrological Chart) Gallery, Armory and Religious-economic Gallery. There were several paintings depicting the Shah Kings and their courtiers. There was even a torso of Ram Shah at the museum, the King famous for being just to the public. Nearby palace some few meters below was a garden lush with greenery.

Finally, we stopped at Malekhu for fried fish, prawn and tea. Then, we headed back to Kathmandu with lots of wonderful memories. The way back to home was entertaining. Abhinav dai singing his best Nepali songs and most of them includes ‘Jeevan’ and ‘Pokhara’ (hometown of Jeevan dai) which was so funny and interesting at the same time. Talking about this hike, it was full of fun, really awesome place rich of natural beauty and historical backgrounds and got a chance to get a glimpse of the past.

11 thoughts on “Hiking to Gorkha Durbar”