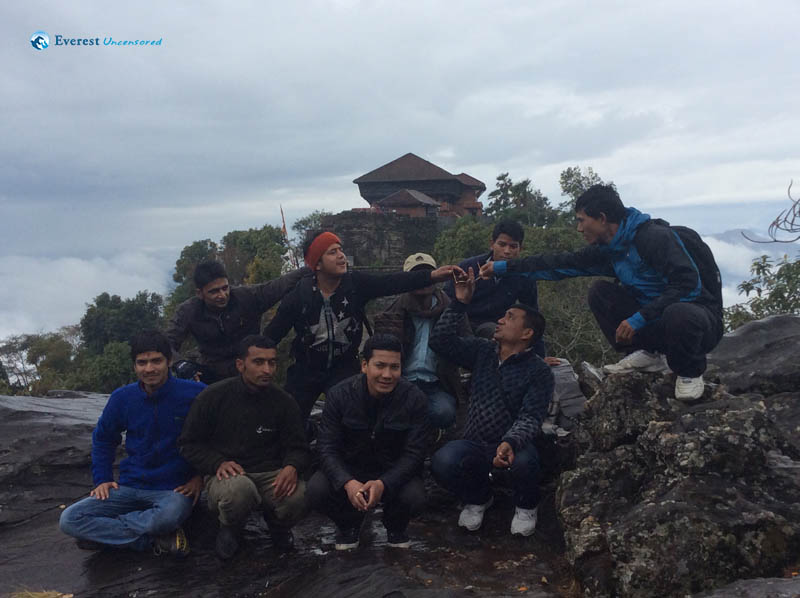 This was my first hike from Deerwalk Services. I had coordinated a number of hikes from DWIT. I am pretty much excited about hiking to Gorkha, the historical Gorkha from where Prithivi Narayan Shah the Great, the founder of modern Nepal started unification of modern Nepal lies about 1,000 ft above Gorkha Bazar. The temples of the great sage and goddess Kali is in the district, after which the district got its name.

Deerwalk vehicle starts to pick up the hikers from different places, it was 5:15 AM when I got picked up by the vehicle. On the way other 3 hikers had joined our team and altogether there were 14 hikers, all were excited and ready for the hike.

We had breakfast at Naubise. At around 8:30 we reached Muglin, a place popular for oranges. The time ticks 10:00 AM and we reached to Gorkha Bazar. We started the hike from the Bazar. The hiking trails were clean and fresh. It was a hike of 2 hours. Firstly we visited Pashupati Nath Mandir located near Gorakhnath Mandir, and the cave of Baba Gorakhnath near the palace.

The sage is believed to have been the guide of Shah Dynasty. It is for his guidance that the Shah dynasty could unify small principalities into modern Nepal.

The sage is believed to have been the guide of Shah Dynasty. It is for his guidance that the Shah dynasty could unify small principalities into modern Nepal.

We also visited the temple of goodness Kali (Goddess of death). It is believed she provides Moksha or liberation to her children. She is the counterpart of Rudra, the destroyer. Near the Kali Temple there was a small palace of the Shah dynasty. Inside the palace we got a chance to have a view of the everlasting fire. It was around 7:00PM we reached Kathmandu.
Thanks to Deerwalk Services for giving me the chance to participate the hike to such a historical place.