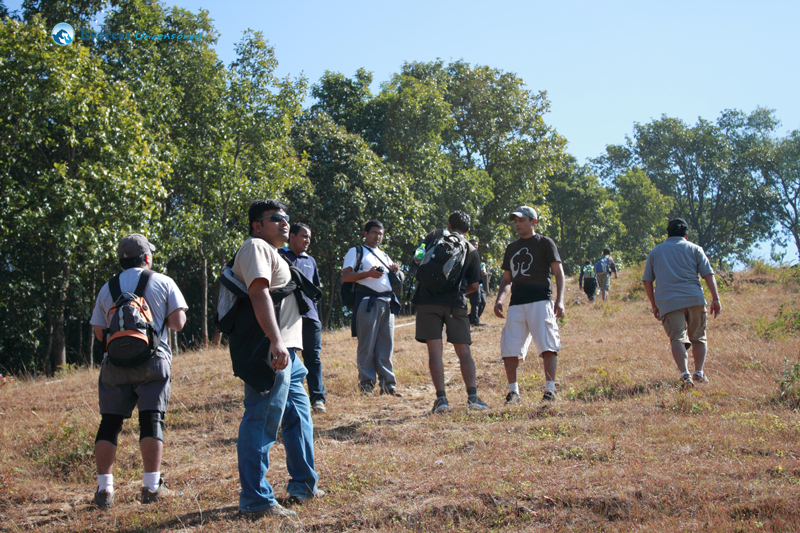 After working for 9 plus months in Deerwalk, I finally decided to go on my first hike from Deerwalk. Despite the freezing cold November morning of Kathmandu, most of us reached the Deerwalk Complex at 7:30 a.m.  We waited for Bhuwan Dai’s arrival before rushing towards Hotel Annapurna to pick up Rudra Dai. As the hiking destination was not finalized we were discussing about different possible routes in the van. Finally after a short discussion with Rudra Dai, we decided on the hiking route to be from Tile Ghar to Bhim Dhunga.

On the way we stopped at Sweet Cave, a small restaurant in Kalimati, to have some breakfast. This was the restaurant where I used to have my lunch during the high school days, and I felt fortunate to have breakfast there after almost a decade. The food tasted the same, and the decorations hadn’t changed much. The curd served was so delicious that it made us we forgot about the hot cup of coffee and the cold weather outside.

The second half of the journey by van began and we all started chatting with each other.

Ashay and I were literally praying for an easy route as Rudra Dai is famous for choosing the tough ones.

Ashay and I were literally praying for an easy route as Rudra Dai is famous for choosing the tough ones. For me the fear was much higher as it was my first hike with him. The environment within our van became hilarious with the gossips of Lava Dai and some entertaining songs. Within an hour, we reached Tile Ghar and filled our bags with drinks and food before finally starting the hike.

Rudra Dai led the hike and showed us the hills which we should be crossing to reach our destination.  Lava, Sushant and Rudra Dai recalled some of their hiking experiences during the trail. The weather was getting warmer and the sceneries were amazing as we continued walking. At least for a day we were not breathing the polluted air of Kathmandu City. After two and half hours walk from Tile Ghar on the way to Maidan, we decided to take a small break and have some chilled beer. We also opened our Bhai Tika masala packets (packets containing dry fruits, chocolates, peanuts etc.) and emptied them in no time.

The trail to Maidan was the toughest one in the route. We climbed a very steep hill and as expected, Ashay and I were the last ones to reach Maidan. While ascending, we got a chance to view the magnificent natural landscape. Pramod Dai was busy capturing them using his DSLR. After crossing Maidan we were looking for a place to have some local nepali khana for lunch. Luckily, we met two old villagers who guided us to a nepali restaurant at Chhatre Deurali. We ordered some snacks and lunch while playing cards and drinking the remaining beer. In the meantime, Bhuwan Dai played his favorite collection of songs that included Anju Pant’s “NabirseTimilai ..NapayaTimilai..”, and some of us did a little dancing over them. The dancing’s of Bhoj Dai and Bhuwan Dai were really entertaining. A bamboo swing placed during Dashain festival was still available, and many of us got a chance to try it while waiting for the lunch.

It was around 3:15 pm when we had our delicious nepali lunch. We started the last part of the journey for the day towards Bhim Dhunga. The route was fairly simple but it was longer than what we had expected. On the way we saw several nepali restaurants filled with people. The restaurant business seemed really growing in the nearest hills of the Kathmandu valley. Around 5:30 pm we reached Bhim Dhunga and had a short drink break. Most of us were tired from the hike and it was getting darker. Kedar Dai arrived around 5:45 pm and drove us back home.

Big Thanks to Deerwalk for organizing the hike and to all the team members for making it an incredibly memorable one. And also thanks to the weather gods for not being cruel on us that day.