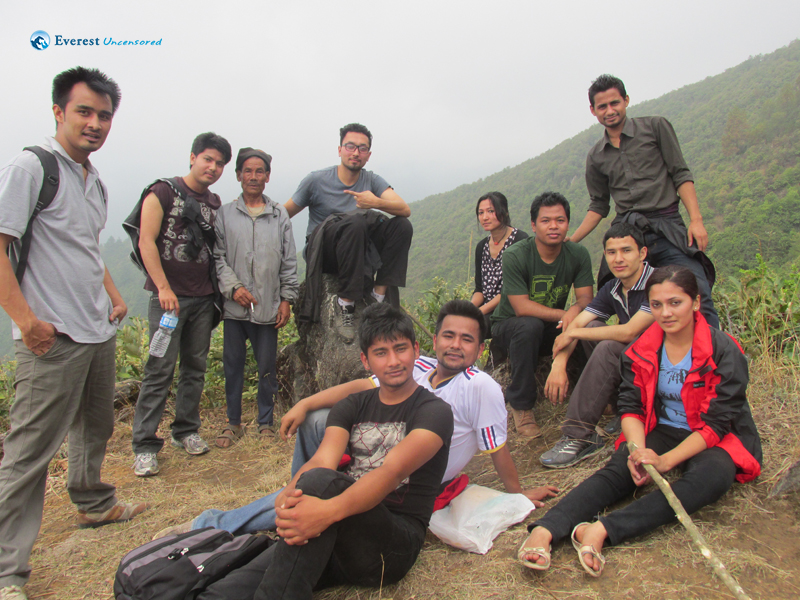 Yesterday (May 4,2014) was the best day of my life as I got a chance to go hiking with my seniors. The trip to Champadevi temple was amazing.

I woke up early in the morning and reached Deerwalk at about 7:00 am because it was my first hike and I was excited for it, although we were informed to leave at 7:30 am. I was first to arrive among all the hikers as I was very excited about it. We went to Bhatbhateni and had some snacks and cold drinks. We arrived at Pharping at about 10 am and headed towards our destination.

We started our way from Pharping and in no time we got inside the forest where we were hardly able to find our way. After a while we found that there was no way ahead so we started to explore the way inside. We started to head upwards into the forest hill. We took some group photos and again we continued our journey resting, talking and joking on the way.

We meet an old man who was the forest keeper and he said that we aren’t lost and he agreed to take us to the temple. After walking with him for about an hour at about 3:30 pm we reached the. We dodged the leeches on the way and reached the main road and found our vehicle at about 5:00 pm. Now we were so much tired and felling hungry, so we headed towards Lahana Khaja Ghar at Kritipur. After eating some food, we got some rest and we returned back to the bus at about 6:30 pm. As we got inside the bus Sudan started to sing a song and we were singing the song after him. We continued to have fun on the way back and got to the office at about 7:45 pm.

I feel closer to my colleagues after this hike. I was a great experience overall.

We started our journey from the office premises at about 8 am . The hike was organized by Service Team A but we included some QC members who were seniors. As we traveled along I got the chance to know them, and they turned out to be a lot cooler than what I was made to believe. There was enough merriment going on in the van as we stopped in Bhatbhateni super market to buy some dry food and cold drinks.

At one point we met a 55 year old man who was the jungle security guard and he helped us to get the temple. We took some photos there. We finally reached Champadevi temple thereafter. Then we headed towards the Bosan. After 2 hours we reached Bosan where we got the chance to see the gate of Champadevi Temple.

Finally, we drove to Kirtipur from Taudaha to have some snacks. We return back to KTM at about 6 PM.