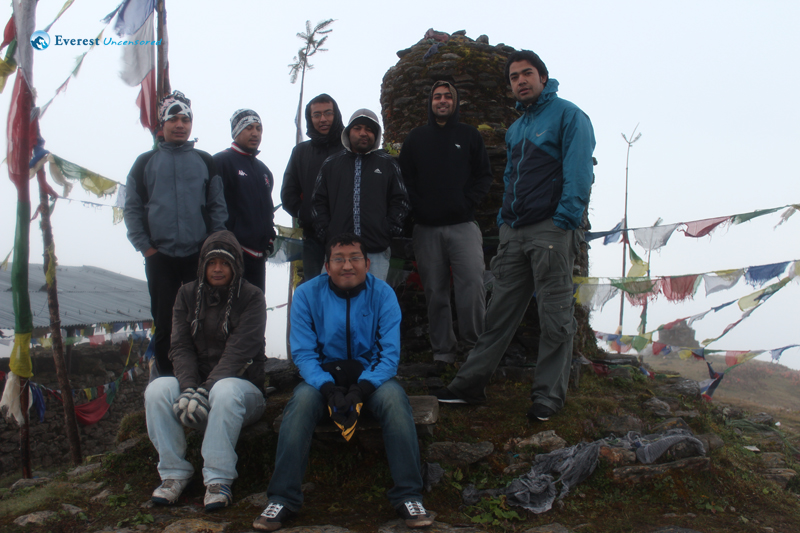 Prasanna Pandey
The season of Dashain ushers in with it a time for celebrations as routine life is interrupted. People bustle to travel to their homeland to meet friends and relatives and seek blessings from the elders. I endure this season longing for someplace to go and Sailung seemed like a perfect overnight hiking destination at a time when winter is just starting and the road traffic is still not heavy.

We left office premises around seven and were stopped in atleast four places by the police before reaching Mude along the Araniko Highway around noon. We took our lunch and discovered that two buses had just left for Dhunge. There was no other option but to walk along the dusty road until another bus showed up. After about an hour along the road we abandoned the wistful possibility of any bus ever showing up and started taking numerous shortcuts up the hills.

The trail wound through dense jungle that seldom saw any passers-by. The wide open valleys were covered with white wild flowers and there was hardly any animal in sight (including humans). One hill after another we lumbered on as the trail picked up altitude and the temperature dropped.

We reached Dhunge which is a small settlement with a few roadside eateries around four. We knew that from Dhunge the trail would be steeper and uneven but a few hours of walking had energized us as we could breathe in mouthfuls of clean, crisp mountain air. We rested briefly at Dhunge before starting up for our next stop, Kalapani.

Kalapani is an eerie place. It was already dark when we reached Kalapani and saw a small roadside settlement completely abandoned. I assumed that the village was abandoned due to lack of visitors to Sailung but someone told me that an old couple still lived there. Others told me that it was deserted as it was haunted and people were buried there. I was amused by their stories as I looked at the forbidding houses entertaining the idea of resting there for the night.

In the light of our torches we walked up through a treacherous trail that was uneven and lined with sharp rocks. It was the most difficult part of the hike and time passed slowly. I remember watching the hour hand of the clock creep slowly from seven to eight as we felt the cold wind evaporate the sweat of exertion from our backs.

We crossed lung (small hillock – Sailung apparently has 108 small hillocks hence the name, Sai meaning a hundred) after lung trying to meet up with guys who were up ahead. Finally we reached Khola Kharka, a small settlement on the other side where we were privileged to enjoy the hospitality of the Tamang owners.

The next morning we woke up early and climbed up to see the sunrise. The view from the top was magnificent. Increasing light danced on the sea of clouds in ever changing hues. The distant hillock where the temple of Sailungeshwore Mahadev is located appeared to be on an island in the sea (of clouds). The snow on the peaks of Makalu, Everest and Dhaulagiri echoed the changing colors of the morning.

We descended to Khola Kharka where we caught a bus back to Mude. We had lunch at Dolalghat before heading back to Kathmandu. This has been a memorable overnight hike for all the participants at the mouth of Dashain festival.

7 thoughts on “Hiking from Mude to Sailung”