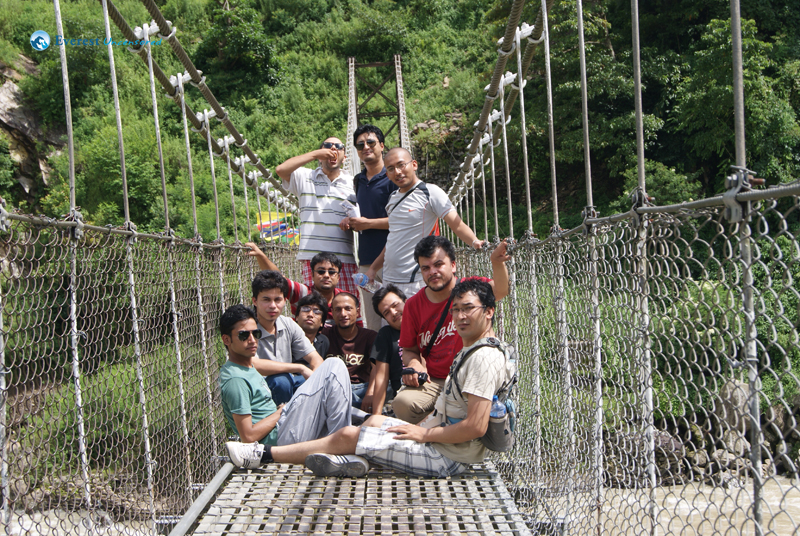 It was not the usual Saturday morning as I got up early. It was to be around 6:45 am but because of the rain we could not start on schedule. But still we managed to leave at around 8:00 am.

It was really exciting to start with beautiful music and the usual chatting with each other. But the worst happened between Baneshwor-Dhulikhel road because of the music choices that could not been changed. After reaching Banepa we had breakfast there. Song request were catered to by Kapil and I while enjoying the surpassing vista along the road.

We reached Melamchi at around 1:00pm. We then settled into a resort and the beautiful green hills and the Indrawati river flowing nearby added to the divines of the. After sometime we went for a short hike. Along the way we had pani puri, chang, sekuwaa and had lots of fun. Actually the fun was resting for 25 min after every 5min walk.

Then we went back to our resort, got freshen up and started the discussing about Communism with local fish servings and beer. Discussion went till the evening. Then after we started singing folk songs while playing madal. At 8:30pm we had dinner and after that i went back to sleep as I was too tired.

I woke up in the morning by the whistle of the river nearby. After breakfast some of us went for the hike but I stayed in the resort enjoying the scenery around. At 1:00 pm after having lunch we went back to Kathmandu packing our bags. Along the way back we visited the bank of Indrawati river. When I walked barefoot in the cold river, I realized that the nature has given us a lot and we have to make time to see them in between the hasty usual schedule.

Coding, googling, developing stuff within a silent room, getting up late, and sleeping late are often the common activities of a programmer; but in order to boost a healthy life we also need to have activities like hikes that will keep you body and mind fresh. In addition to that hikes also challenge us with discoveries and new ideas.

My name is Hikmat Dhamee and I have been working at Deerwalk for a month. It was my first hike from Deerwalk since I joined the company. We all reached the office premises at 7:00 am as we were instructed to be there at that time. We were altogether 14 members for the hike and the route was from Melamchi to Ghyanphedi. We took the office vehicle and reached Melamchi while joking and having fun all along the way.

After reaching Melamchi, we found ourselves some lodging first. Around 1pm, we all started moving uphill. We split up into two groups; one was a group of fast hikers and other was of the slow ones. Both groups followed different paths for reaching the destination and then the two groups never saw each other until the end of day. During the hike we enjoyed the nature and each other’s company. Even though the rain was teasing us time and again, we were cheerful and not fazed by the dismalness of the weather. Finally, we got to the top of the hill and had a great time there enjoying the view. Then since it was getting dark we made our way back to the hotel.

The next day we got up late because of the long walk and had our breakfast. After few went for a bit more of walking while others decided to stay back enjoying a game of cards. We finally had lunch around 1:30 pm and returned back home thereafter, joking along the way again.

As a whole, the hike was refreshing and recreational with pleasant moments with the fellow Deerwalk participants. One of the most beneficial aspects of the hike for me was that chance to know fellow Deerwalkers in a more personal level.
Thanks Deerwalkers!!!

I’ve been to hikings with my college friends during college life; but it was my first hike after joining Deewalk as an intern. I was really excited because I love travelling and exploring the beauty of nature.

That morning rain was pouring heavily and I somehow managed to reach Deerwalk premises at around 6:45 am. We left at 8 am and picked up a few participants along the way. We had our breakfast at a restaurant and headed towards Melamchi. After a long drive of about 4 hours we finally reached Melamchi. We had our rooms booked at Melamchi resort. After some time all the hikers were ready for hike from Melamchi to Bharyang Pokhari. We ate panipuri and chatpate on the way. It was fun.

After climbing some uphill path we started taking shortcuts. In that moment the deerwalk hikers were divided into 2 groups. One group led by Kapil and the other was led by Narendra. We were climbing the hills without knowing our destination. As we were climbing, the rain starts to pour but it did not deter us.

It was getting dark and we had to return back to our resort, so we left Bharyang Pokhari at about 7pm. Moon was guiding our way. We were walking in the moonlight viewing the beautiful night scene of the villages far at the hill. Dark everywhere but the bulb light glowing at some houses were amazing.It was difficult to walk at night. We couldn’t see the road at all. Fortunately, Narendra got a lighter with a torch. He guided us to walk down the hill. Finally, after 2 hours of walk at night we reached our rooms at Melamchi resort, had our dinner and went to sleep.

All in all it was fun.