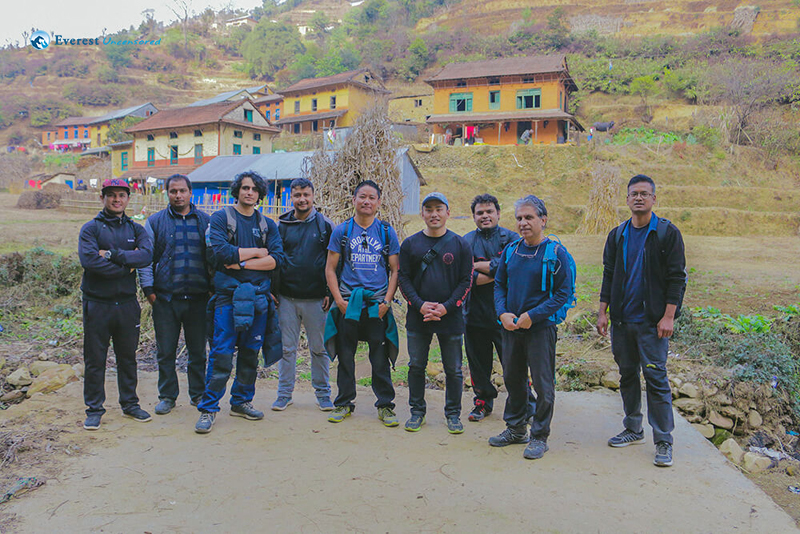 Anil Shrestha Ahh!! 2018!! That ended up giving me first time experiences of everything that I had never thought of whether that will be happening at some stage of my life or not. Well, nevertheless 2019, to be more specific early 2019, had already started surprising me and I hope it will not stop to keep on surprising me ;). The first surprise of 2019 was the hike with Rudra dai,team and Kei. Kei, sales manager of Deerwalk Japan Ltd was here in Nepal for a week, it was his first visit to Nepal.

I was thinking I was the only one who was unknown regarding the destination of hike, but later I got to know that the destination of the hike was yet to be decided. The hike route from Godawari to Panauti was decided and at around 8 a.m. we left Deerwalk complex for the destination. It was a cold Sunday morning, many peoples in groups were enjoying the firewoods in front of their shops to beat the cold.

We reached to Godawari at around 8:40 a.m. We took our breakfast and after the breakfast at 9:20 a.m. we started our hike. As we walked uphill we started taking off our jackets, the current most popular dohori song “saal ko paatko tapari” was so loud that we could hear till the top of the hill. As more we were approaching to top, more the view was being pleasant, tall trees, sunlight piercing through tall trees, view of mountain, Buddhist prayer flags and the round of group selfies. Right things at the right moment.

At 11 a.m. we reached to chapakharka, took rest for a while, Rudra dai and Pramod dai distributed paper,pencils and eraser to childrens who were returning after collecting fodders. Luckily some of them got extra ones as they have other siblings who goes to school. After that we resumed our hike and after an hour long walk to downhill we reached to lakurivanjhyang. We had a tea and tarkari at the local shop. It was good listening to current politics, trends and meditation. Pain is temporary that one should consider while meditating was the punchline of the discussion while having rest at Lakurivanjhyang.

From lakurivanjhyang we were now all set to Manedovaaan. We started walking down enjoying the views and talking with the local residents asking them the way to Manedovaan. Can we take the goat? You can take it as free that was the reply of the local people out there. We explore how the wines were made in local areas, females were cutting the firewoods.

Finally, we reached to Manedovaan, had some snacks and lunch. Enjoyed the fireworks, there was one of the serious discussion on how the lifestyles were being changed. The pretty shift from the Yamaha RX100 to Pulsar 220 cc bike, cooking from woods to cooking with the kerosene using cooking stops to the price of gas cylinder from Rs. 650 to Rs.1400, from playing chungi to playing games on mobile and ease of typing Nepali with Nepali keyboard.

We returned at around 4 pm from Manedovaan. Kei was being surprised finding all peoples staying and having a chitchat. He was asking why they were doing so, Rudra dai was explaining Nepali people used to have relaxed lifestyle. I agree on that comparing to rush and busy Tokyo lifestyle Nepali has a more relaxed lifestyle.

To sum up, I must say this was one of memorable hike, I enjoyed it fully. Thank you.