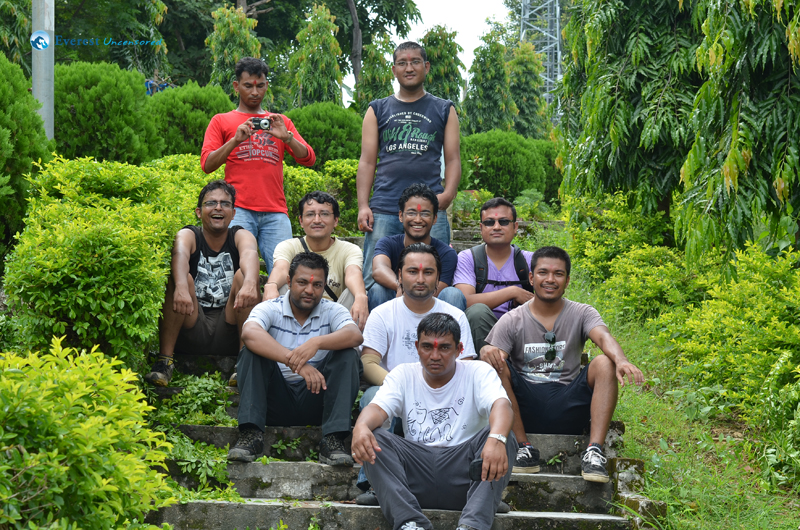 Kiran Dangol
Gaindakot (गैंडाकोट) is a small town of Gaindakot Municipality of Nawalparasi District, next to Narayangarh, Chitwan in Nepal. The official name of this place is Adarsha Gaindakot Village development committee. It is located in the bank of Narayani River and is backed by numerous mountains. Gaindakot is situated at an approximate altitude of 150m above sea level.

Gaindakot is famous nationwide for Maula Kalika temple and for Maula hill hiking. The temple is situated at the top of the Maula hill mountain (approx 600 m above sea level) where people have to climb around 2 km long trail. Maula Kalika is popular for its 360-degree panoramic view of the entire Chitwan valley including Chitwan National Park in the south and Mt.Manaslu and Kaligandaki river in the north. The temple is also famous for its sunrise view. Many high-ranking officials of Nepal, including presidents, former kings and foreign dignitaries have visited the temple. Dashain (Vijayadashami or Bada Dashain) festival in Sept-October, and in March–April (Chaite Dashain) are its peak seasons. Maula Kalika is the symbol of Hindu goddess Kali or Kalika who is associated with eternal energy, the symbol of power, harmony and new beginning.

On 2nd September, 2012, at 6:30 am, we started our hike from Gaindakot to Maula Kalika. This was one of my easiest and most delightful hikes in Deerwalk. It was short, not strenuous, and very beautiful. The downsides were that we missed some of our friends and the traffic was hectic at times. On the way, we did a lot of gossiping and told numerous funny jokes. We were delighted by Ishwor’s knowledge sharing. He shared stories about his personal life on how he came up to where he is now.

Lava also shared his stories. He told us about development of Deerwalk and brilliance of Rudra behind the formation of Deerwalk.

Lava also shared his stories. He told us about development of Deerwalk and brilliance of Rudra behind the formation of Deerwalk.

After 5 hours, we reached to Gaindako. Kedar parked the Deerwalk van and both Ram and he joined the hike. It was a sunny day. We all seemed a little tired because of the long drive. At the entrance of Kaliganga Mandir, we took some group photos. Then we climbed stairs to reach Kaliganga Mandir. At the beginning, all eleven of us were together. We got tired very quickly which we hadn’t expected so early in the hike. It was because of hot sun. After that all members slowly went on dividing automatically. We were all wet of our sweat. But thanks to local people of Maula Kalika who had made lots of resting places and taps for drinking water along the path.

Sunil Manandhar and Kanchan Raj Pandey were busy capturing beauty of Maula Kalika. Ram and Kedar, both were busy competing on who would reach the temple first and having fun on the way. Ishwor, Lava and Jeevan continued to share knowledge about their personal life experiences. We also saw a helipad on the way which was built for VIPs.

After an hour and half, we reached our destination, Maula Kalika Mandir. At first, we all went inside the mandir and took a lots of pictures. Everyone was trying to capture 60-degree panoramic view of the entire Chitwan Valley. From the top of the mandir, Narayani River looked like the Amazon River. We rested there for about half an hour and started to move down. After about half an hour, we reached bottom of the hill where we had parked our van. Then we moved on to have lunch. Since we had limited budget, we had to be economic about our choice of hotel. We knew Chitwan is popular for its “Tass”. We ordered it but didn’t find it as good as we had expected.

Around 4:30 pm, we headed back to Kathmandu. Because of the tiredness, it wasn’t as much fun compared to the morning trip. Lava shared more information on how Deerwalk is going, how much Deerwalk had struggled to reach to this current position and how it will be going in the future. After 4 hrs, we reached Kathmandu.

From this hike, what we learned was that these kinds of hikes allow for sharing of personal ideas. In office, there is no such time for these kinds of personal talk. So hiking provides a good opportunity on entertainment and information sharing with our seniors.

7 thoughts on “Hiking from Gaindakot to Maula Kalika”