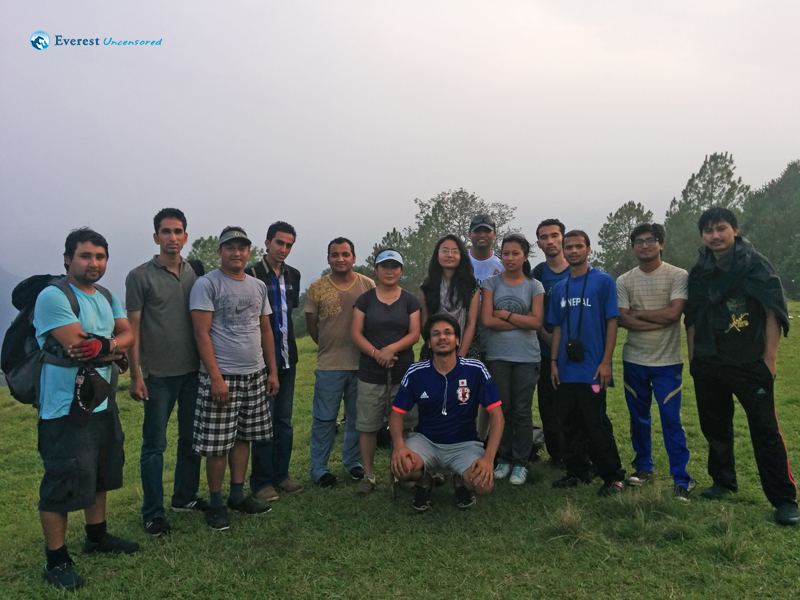 Sicchya Malla
It was my first hike at Deerwalk. The two day hike was from Besisahar to Ghale Gaun, so on Saturday morning we packed our bags and reached to the respective stops. We were 15 people along with Deepak. The weather was a bit gloomy and few drops of rain also drizzled down but we were still hopeful that we could complete our hike. At 6:15 am the bus picked us up and our journey began.

We had our breakfast at Naubise. The rain kept pouring from heavy to drizzles and stopping at times as the journey still continued. It took us around 6 hours to reach to our starting point Besisahar. We had our lunch there and finally around 2 pm, we buckled up our shoes and started our hike. Till then the sun was already scorching. We asked the locals and they directed us to head to Puma Gaun to make it to Ghale Gaun. At first we were all energetic to start though the 6 hour long drive was a bit tiresome, we grabbed our bags stuffed all rain/sun protection we could manage. We then rolled. We started to climb the hills; at first it seemed easy but slowly we got divided to two groups between the ones who could easily climb, fast hikers and the ones who were slow. I along with few others fell on the later one.

The hills that we climbed were about 80 degrees straight, but we managed to climb taking rest from time to time.

The hills that we climbed were about 80 degrees straight, but we managed to climb taking rest from time to time.

The temperature was also bit more to handle as one of the local where we had our lunch said that it was only the day we arrived that it had rained. We were all sweating buckets. By the time we reached Puma Gaun, few of us were all hopeless that we couldn’t continue the hike, and I too raised my hands to stay at the most nearest place possible so that we could catch the team tomorrow and put a full stop to our hike. I was so exhausted that seeing this, Kishor our hiking organizer, helped me with my bag. When we were dragging ourselves, he was jumping up and down with two bags loaded and full on energy. Our team didn’t let us fall apart and convinced us that we could do it. Our team members kept us moving from time to time. By the time we reached Baglung Pani we were out of water and were searching for source. Finally as soon as we saw one, we filled our bottles and drank. Then we saw the locals carrying water from other sources than we had from, we were a bit puzzled and was thinking why they weren’t using the ones we were. But we didn’t care much as that water gave life to us and kept us from dehydrating.

We fastened our pace to reach Ghale Gaun before it was dark. So it was either Ghale Gaun or nowhere. Walking through the jungles we saw paws print on the ground, and at that time we the only girls Dicchya, Rosina D and myself. We were walking to catch up with the team ahead as the later team was with Abhishek as he was having severe cramps.

Finally we caught up the hill which was to lead us to Puma Gaun, then took the main vehicle road. By that time we were divided into group of two in 6 and 9. Aamir, Vivek, Ramesh, Rajesh, Dinesh and Bimal in one and Dicchya, Rosina D, Kishor, Bikram, Ranjan, Abhishek dai, Sagar Dai, me and Deepak in the other group. The group of 6 was ahead of us and we were behind them. At around 7:30 it was quite visible as the moon shone on us, slowly it grew darker. We had lights and were not sure if the other groups had one. By this time we were not into shortcuts as it was dangerous and dark, so we took round and round of the hill but still couldn’t find sign of human habitation. As time went by and still no sign of Ghale Gaun we were not even sure that the other team was ahead of us or it was the right hill to Ghale Gaun. Surprisingly we found cap of Aamir, which made us sure that the other team was ahead of us. And the presence of dung in the roads kept us moving that the hill had human habitat even if it was not Ghale Gaun.

It was around 8 and we were still walking and not a single clue of anything, the phone networks were not good either. The night grew cold and dark and we were scared of all the ‘what if’ circumstances, what if it was not the right place, what if a wild animal jumped out of nowhere, what if we were lost……so on and on.

But the journey was interesting with all the members and humorous talks of their past hiking experience that kept us going. Then Sagar got a call from the other team that they had reached Ghalegaun, now we were a bit relaxed that they had reached safely. Now we wanted to speed the pace up but physically were worn out by walking 8 hours continuously. Then we saw a tractor coming up the hills, it was too slow that killed our hopes that we could get a lift. We kept dragging ourselves until we saw a light and entrance gate at Ghale Gaun. Finally Abhishek and me despite the pain jumped and persevered to our destination and got there at 9:30 pm. We were then taken to houses where we were divided into groups of five. Around 11 we had our dinner and most of us fell fast asleep.

On Sunday morning we went to see the Monastery, temple, Museum and tea garden but missed the scenery of Himalayas due to the mist. Then around 9:15 after having kodo roti, egg and bhaatmas achar we left Ghale Gaun where the villagers bid us goodbye with garland and tika. We then squeaked into a jeep which led us to Besisahar. On our way back there we saw bitter truths, a man at late 50’s was waving for lift, he was walking from Ghale Gaun to reach Chitwan as our team members had talked to him. Though we wanted we couldn’t help him as the vehicle was packed. Either he had to wait for the next trip of the jeep or he had to walk by himself like the other people we found on the road looking for transportation. Life sure is hard when one has to walk like that.

After 2-3 hours drive in the bumpy road, we reached Besisahar where we had lassi to beat the heat and from there on we came back to Kathmandu after having fish and shrimps at Malekhu.

After 6 hours drive, we reached Kathmandu around 7, finally. This weekend ended awesome with thrilling experience and wonderful time which I shall remember for a long time. Thanks to the team for making it happen. So happy Deerwalking !

Abhishek Man Singh
It was Saturday morning of 7th June, we were told to be at the office premises at 6:00am sharp for our hike to Ghale Gaun. We picked our remaining members at different stops on the way. We took our breakfast at Naubise. After around 6 hours of drive, we reached the starting point our hike, Besisahar, where we had our lunch too.

After having lunch, we started our hike. Our first destination was Puma village which was around 2-3 hrs of walk. Since it was 80 degrees vertical climb, it was very difficult for almost all of the members and it was especially very difficult to me as my legs were cramping like hell. But step by step we reached Puma village after 3-4 hrs of tough walk.

We continued our hike taking breaks frequently as we were getting very tired. We reached the next village on our way where we were told we still had to walk 2-3 hours to reach our destination, Ghale Gaun. It was getting dark and we stopped taking shortcuts so we wouldn’t get lost in the jungle. So we walked the main road. We finally reached our destination at around 9:30PM. We were welcomed by the local people and we stayed at their house. We had our dinner and then straight to bed for a good night sleep.

The next moring we took a tour of the village and visited the temple, monastry, museum and the tea garden. It was beautiful. But we were not able to see the beautiful scenery as there was mist over the village throughout the morning. Since nobody was now wanting to walk anymore, we took the Jeep to get to Besisahar where we parked our van. After reaching Besisahar we had some cool Lassi and then on our way back to Kathmandu had some delicious fish in Malekhu.

It was my debut hike and it was one of the most awesome experiences I have had in my life and I look forward to many more with Deerwalk.

2 thoughts on “Hiking from Besisahar to Ghale Gaun”