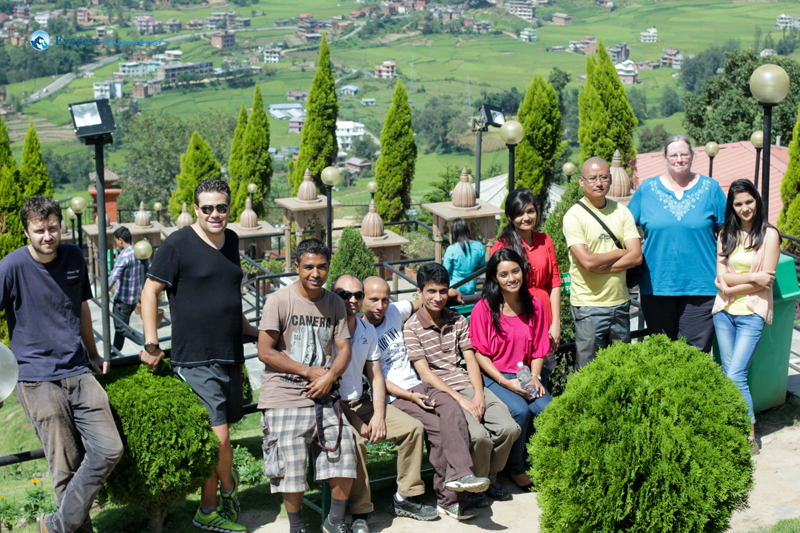 I had a great day hiking with my fellow Deerwalkers, hiking from Banepa to Panauti. The hike started with the van picking us up, along with others at the Annapurna Hotel. Along the way we picked up Sushant and Lekhnath and eventually got out into the countryside. As we were driving we saw “the world’s tallest 143ft tall statue of Lord Shiva ” and we decided to make a quick detour and see the landmark. We stopped and saw the statue and decided it was indeed tall but not very old, built in 2010. After this detour we went on to the starting point of our hike.

The hike, while being “easy” by Nepali standards, was quite difficult for me. We took several nice stops along the way and enjoyed the scenery. The view from the top of the hill was well worth the effort required.

Once we had enjoyed the view we made our way across the hill and then down the other side. While going down the hill we saw several beautiful butterflies and lots of farmers tending to their crops. Once we made it down to the bottom of the hill we met up with Jo Anne and the ladies in the van and made our way to a restaurant at Dhulikhel. There we ordered a good Nepali meal and played marriage while waiting. I was quite successful in the game of marriage and ended up as one of the winners.

All in all, a great time and a good opportunity to get to know my colleagues better.

Thanks for a great time.

Two years ago I had the chance of a lifetime to go hiking in the mountains of Nepal with experts and ignorantly went off to experience the Nepali version of a little “hike”. From that experience I knew going hiking with Deerwalkers was out of my league. So armed with my bottle of water, comfortable walking shoes and the determination to avoid going on the big hike at all costs, I was ready for the day. The mood in the van was light with singing to music playing, laughter and good banter as we left Kathmandu. When we passed by a huge statue on a hill, the decision was made to make a detour and walk to see it closer. Although it was not ancient [built within the last few years], it was none the less impressive. Of course the moment was captured with all of us at the foot of the statue by the hike’s photographers. The scenery was beautiful the entire trip and the higher we ascended the more spectacular the views no matter which direction you looked. The women on the trip decided to not go on the hike [it may have been they were asked to babysit me], which from reports of those who did hike was an excellent choice. We non-hikers explored the countryside, ate apples and got to know each other better. While waiting for our evening meal, we played cards. I found that many of the card games were ones we played in the US but always with a Nepali twist to them. The day overall was great and experiences like this help me understand what makes Nepal such a special place.

There’s a popular phrase- “Somewhere between the bottom of the hill and the summit is the answer to the mystery why we hike” and with that in my mind I reached the office premises early on the Sunday morning, with the feeling of excitement and readiness to enjoy the ingredients of the upcoming mystery. From the very day I joined the company, I had been hearing a lot about the hiking tradition of Deerwalk. Finally I had the chance to be part of one.

On the way, we picked up Jeff and Jo Anne from Annapurna Hotel. What made this hike even more enjoyable was the presence of Jeff and Jo Anne. A little further on Lekhnath joined us with his hands full of chocolate. It was his birthday and we sang the birthday song to him in the tone nursery kids sing for their fellow mates. It reminded me of the old childhood days. Moreover, the playlist of songs was the gem of the trip during the drive. Special thanks to Pramod, the Allah Allah song was a hit as everyone were singing along to it while I and the other girls were at the backseat laughing at the activity unfolding. Our hiking route was decided to be Banepa-Panauti-Dhulikhel, but there was a certain twist to it. On the way we stopped at Sanga and decided to climb up the hill to watch Kailashnath Mahadev statue, the world’s tallest statue of the Lord Shiva. It measures 108ft tall feet to head and 143ft tall feet to the top of trishul. I must say it’s a splendid piece of art and I was mesmerized by its beauty. After that we headed towards the vehicle and continued our trip towards Banepa as planned. We were supposed to hike from Banepa to Panauti via the mountain, and once again there was another twist. The girls and I stayed with Jo Anne in the vehicle to give her company while rest of the boys hiked. While the boys were climbing the mountains, we went on a long drive enjoying the natural beauty around, eating chocolates, chips, clicking pictures and chatting with each other.

After two and half hours, the hikers joined us. We went to Dhulikhel to relax and have some “real meal”. The feeling of being amongst nature while spending quality time eating, playing, talking, laughing and interacting with each other was amazing. Jeff and Jo Anne learnt to play cards and to everyone’s surprise, were winning; they had the beginner’s luck going for them . By the side of our restaurant there was 1000 steps mountain that lead to Shantiban, and we went up counting the steps. The mountain was really very beautiful and it had a big statue of Lord Buddha which was very eye pleasing. The view of Dhulikhel from the top was amazing.

Overall the day was great. I enjoyed each and every part of it.

4 thoughts on “Hiking from Banepa to Panauti”