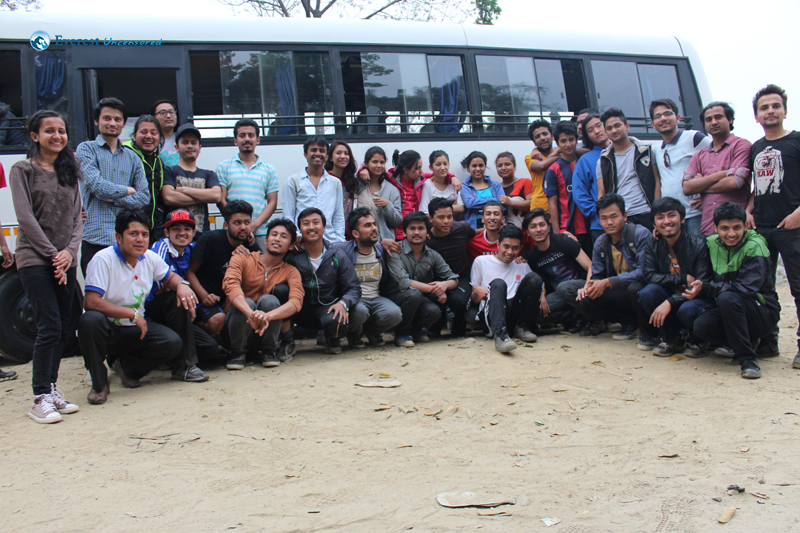 It had been almost a year that I hadn’t hiked because the last hike that I had gone to, the Manakamana hike, had sucked up all of my energy and I needed some time to fill it up again. The hike that was scheduled for 27th March 2016 was just the right time for me to experience hiking again since it was a special one; it was dedicated to my Batch, Batch 2017. Also, I somehow, somewhere, overheard that it wasn’t going to be that tough, hence I was sooooo in!

27th March: I woke up at just the right time, got ready and went to Sneha’s place. We had planned to get into the bus from Koteshwor rather than from the college. We reached the bus stop at around 7.15 am as instructed, but had to wait for around 20 minutes. However, time passed by quickly since we had some other friends there too and we were busy talking. We got into the bus and only then did the hike day officially start for me.

It was mind soothing to enjoy the scenic beauty on the way to Zero Kilo (interesting name, I must say!), where we had stopped for breakfast. Then, after a short bus-ride, we reached Dolalghat Bridge, from where we started hiking. I was enthralled by the scenic beauty.

It was mind soothing to enjoy the scenic beauty on the way to Zero Kilo (interesting name, I must say!), where we had stopped for breakfast. Then, after a short bus-ride, we reached Dolalghat Bridge, from where we started hiking. I was enthralled by the scenic beauty. I had been craving to enjoy nature for so long and I was glad to be able to finally fulfill my craving. The view of Bhote Koshi was just awesome. We were having fun talking, singing and hiking. Slowly, the hike started getting tough. Climbing uphill was sooo difficult..uughh! I was tired. I was stopping after every few steps. Thanks to my friends who had helped me hike. Shreha was pulling me forward with her and sometimes it would be Asmita (Kichhu) pulling me and sometimes it would be Sneha. Nonetheless, I was having fun!

Towards the middle of the hike, we somehow separated from other friends. There were around 8 of us and we thought that we were lost. We were following a narrow trail with Asmita leading us, but we couldn’t see anyone, neither before nor after. We were scared, but didn’t lose hope, called some friends to know the way and kept on following the trail until we finally met some other friends. We asked some locals for the shortest way to Palanchowk Bhagawati and reached the temple, quite on time.
The bus was there to pick us up. Thank God, we did not have to hike downhill. I was already out of energy! We then had rice with chicken (yumm) at around 4.30 pm and then, with full tummies, set off for the return bus trip to our homes.
Overall, it was a fun day, a day different than usual, a day that quite helped me clear my mind!

On 27th march, We went to Palanchowk Bhagwati for hike. We headed out for Dhulikhel from the college around 8am. Commute was really fun as we started singing lok dohori songs. We reached zero kilo, Dhulikhel around 9:30 am and had a mild breakfast before we started our hike from Dolalghat bridge at 10:45 am. I was clicking selfies at each checkpoint and uploading selfies instantly on Instagram as I wanted to make hike log. One of my friend could not walk and he gave up uphill climb just after 5 minutes of walk. As we were walking uphill we stopped at one of the homes where there was a big tree. Avusaan, me and Dipesh started climbing the tree. But that tree had a bee hive and was home to some red ants, as soon as we found out we rushed back to the ground.

Prabin, Alan and Roshan were like beast and way ahead of rest of the pack. They were like an hour ahead of my group. As we were walking uphill we met an old man who was walking faster than us and on top of that he was carrying almost extra 20 kg of load with him. Some of the guys were talking with him and he offered us some drinks at his house. We stopped nearby his house and took rest for couple of minutes. We clicked some photos with the children’s there and asked them about their daily life. After that we again headed towards our destination. In of the places we found a beautiful tree full of red flowers (I don’t know the name of the flower). We clicked photos in front of the tree just for fun.

After that place the trail got very narrow, we could only walk in a single line. We almost got lost at that time but I somehow managed to find the right route.

After that place the trail got very narrow, we could only walk in a single line. We almost got lost at that time but I somehow managed to find the right route.

Finally after tirelessly walking for 3 hours we reached Palanchowk Bhagwati(temple). We clicked some photos and visited the temple. After 1 hour we headed down to Zero Kilo again for lunch. After heavy lunch, We returned home.