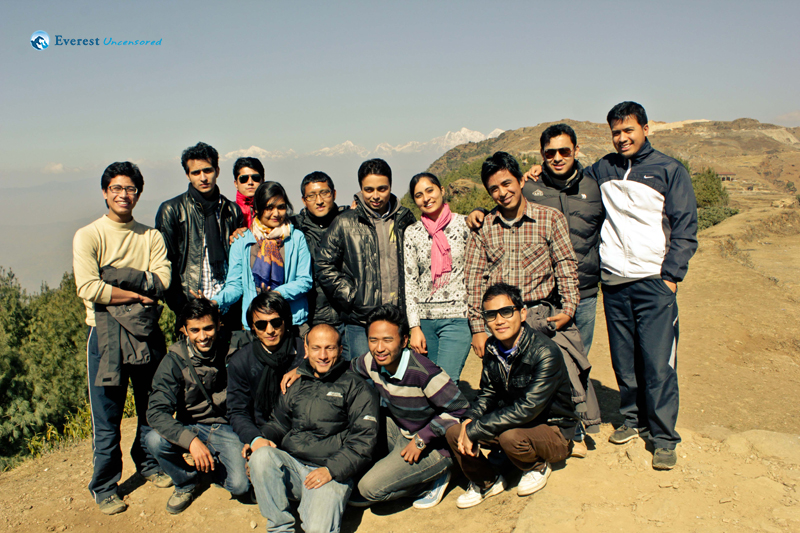 We were 15 hikers in total. All were imagining the place in their mind as described from other hikers. The way was long for the destination, so we decided to play “antakchari” to pass the way with fun and joy. After travelling for about four hours we reached a place called “Khari Dhunga”. We had photo shoot to capture those precious moments in our cameras. Kapil said that some places on the way were comparable to Switzerland’s landscape because the way went through the hills. We continued our journey through the hills.

Around 12:30 we reached “Charikot”. We had some snickers and noodles on the way but still were feeling hungry. So we decided to have lunch at “Charikot”. After having lunch we headed towards a place called “Chothang” from where we left the highway. Travelling for around two and half hours in local jeep we reached to a place called “Kuri” – the base camp for “Kalinchowk” temple. The place was awesome. The landscape view of the Himalayan ranges with rays of sunset made feel us as we were at the peak of heaven. Looking at the mountains we felt cold but playing with snow gave us feelings as we were at those mountains in reality. Having sunset view we returned back to the base of “Kalinchowk”. We were all excited for the next day’s hike to the hill top temple.

Next day we climbed up the final destination. The mountains were all lightened with the morning sun rays but still we were waiting for the sunrise. The sudden sunrise spread its beauty all over the place. At that moment we had nothing to say other than “Beauty ko pani limit huncha ni…….”.

As the sun went up in the sky we started to make our way down the hill. At the base we had tea and sel roti to get some energy . After walking for 5 hours we reached “Chothang”. We had lunch with local chicken. Then we headed back to Kathmandu.

Sometimes we need such hikes to enjoy the beauty of our country. May “Kalinchowk Bhagawati” bless us all………

When I heard about the plan for a two days hike to Kalinchowk, I was very excited. On early Saturday morning around 6AM we reached the Deerwalk premises. Although weather was chilling, the excitement of hiking was adding heat to us all. We left Deerwalk around 7 am and headed towards the destination.

Sightseeing through the windows of our van, I was really thinking nothing is as perfect as nature. We were trying to capture some of its beauty through our cameras. Kapil planned for Antakchari and he divided the teams. We started singing songs, only Nepali songs. It was great fun when everyone was lost in the feelings of the songs. When we reached Kharidhunga, the view of the snow capped mountains was panoramic. We stopped our van did some sightseeing and took some of the photographs.

Around 1:30 we reached Charikot. We took lunch, our favorite rice, lentil and vegetables. After that we resumed our journey to Kalinchowk. We reached Kuri around 3PM. It was our destination for Saturday. We were a bit tired, but the heavenly beauty was full of energy that we planned to hike to the nearest mountain to view the sunset. There was not much snow, but still we managed to play with it. All were ready for different poses for photographers trying to capture the beauty. We reached the top of the mountain, clear blue skies, white range of Himalayas, it was so beautiful. After all it was time for the sunset, the last rays of the sun, white mountains were golden, sun being summoned by the sky, red horizon, it was so magnificent. We were back at the hotel where we were resting for that night, after dinner, few of us were out to look at the stars. The weather was so chilling, so we planned for next morning and went to bed.

It was 5AM, cold Sunday morning; stars were still shining in the deep dark sky. We started our hike to Kalinchowk temple. If it scares you, it might be good thing to try; I thought so and joined my group. It was so cold, hard to breathe but everyone had the zeal to reach the top. After one hour uphill hike we reached the temple, the ultimate destination of our hike. The view was euphoric. Large range of mountains with its divine beauty was surrounding the world. We were all waiting for the sunrise. East horizon was getting red. The radiant sun evolved behind the mountains, and burned the top of the white Himalayas. It was time to get back. We returned back to Kuri, took breakfast and started the hike back to Charikot.

Now it was down slope, although we assumed it to be easier, it was not that easy. But shortcuts and our gossips were making our journey shorter. It was fun to be close with one’s own team members in a personal level. Usually hikers say, it’s the journey which matters not the destination, I believed it that day. We reached Charikot, took lunch and returned back to Kathmandu. Return journey was also full of fun, jokes about each-other.

It really was a wonderful hike. The journey was splendid and the destination was amazing.

135 thoughts on “Hiking from Charikot to Kalinchowk”