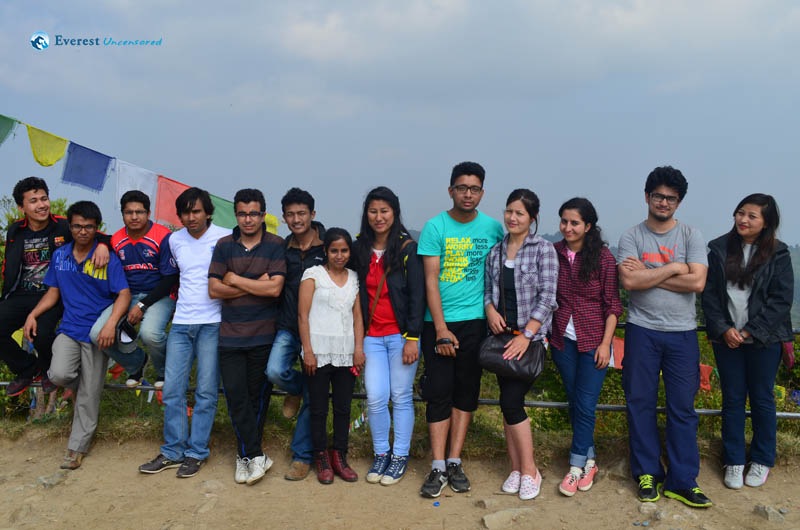 Sumit Prajapati
Finally, the day came. It was my first official hike and I was so excited for getting selected. The hiking route was from the Changu Narayan temple to Nagarkot which is approximately 14 – 15 km. It was 19th April, Sunday morning, I reached the office at 7 A.M sharp. I was then joined by a few of my teammates and so the journey began. The office van drove off by picking up the rest of the backpackers from respective location.

The first thing we noticed was the peculiar old Hindi songs, played in the van, that many of us had never heard before but was still entertaining and sometimes quite irritating as well. We were all joking and talking about things here and there. After an hour of journey, covering a distance of 16km, we reached the Changu Narayan temple (our starting point for the hike) at approximately at half past 8.

The Changu Narayan temple is the historic temple found till date in Nepal and is dedicated to Lord Vishnu which is listed by UNESCO as World Heritage Site.

The Changu Narayan temple is the historic temple found till date in Nepal and is dedicated to Lord Vishnu which is listed by UNESCO as World Heritage Site. On the way to the Changu Narayan temple we saw the fascinating views of Sankhu locality. We all went to the temple where we blessed our eyes with awesome view of all those ancient statues and pulchritude art crafted on the temple. We took some photographs as well. As all of us were very much hungry by then so we decided to have breakfast in the nearby cafe. We literally waited for an hour and finally got our breakfast served, after which we embarked our hike.

Around 10:15 A.M we started our hike carrying some water bottles and snacks with us. The weather was fine except the hot sunny day, so some of us were carrying an umbrella. While we were walking we saw a few of the tourists passing by us from the opposite side and we soon realized that we were taking the opposite route for hiking. Nevertheless, we realized that we opted arduous route as it was mostly uphill. Success is not the destination, but the struggle to get there. And I was glad to pick out this route. After walking through the jungles from the Changu Narayan temple we arrived at Telkot. There was a huge stairs to reach temple at Telkot, we climbed the stairs and reached the temple and took some rest for a while.

By that point our group got divided into two and we were the one on the front walking with the same pace and we soon realized that the second group was nowhere to be seen. We came to know that some of our team members had difficulty to walk so they were arriving by vehicle. But we decided to continue our hike. There was a point when we could see our van from far away, but due to turns on the road we had to walk more than we thought to reach there. Finally, we reunited with our team at Nagarkot bus park at around 3:00 P.M. We all had our lunch there and took some rest for a while. From there our next stop was Nagarkot Tower and we went there by van and from there on foot to the tower.

Nagarkot is popular for a stunning sunrise and sunset view and is one of the most popular hill stations. Situated at an altitude of 2100m from the sea level and 32 km from Kathmandu this small hill station provides spectacular view of the northern mountain, sunrise, and sunset. That was the ending point of our hike and I was copious with joy of successfully completing the journey. From there we headed right back to Kathmandu. The best think about the hike was not only the route and the destination, but the people with whom we got to share this amazing experience with.

Suresh Ghatuwa
After six months of Joining Deerwalk, I got the chance for my first hike. According to the schedule, I reached at Dekocha, Bhaktapur at 7:15 AM. Deerwalk’s Van picked up the hikers from different places. We drove through the green fields and terraced land towards Changu Narayan and reached around 8:45 AM.

The Changu Narayan Temple is an administrative center of Mandev Malla. The temple is an earlier temple of Nepal made in Pagoda Style. It is the venue for many religious and cultural ceremonies like Jatras, melas and others. Since the ancient period, many festivals and fairs have been held here on various occasions. It is also known as the open museum. The site is enlisted on the World heritage Site by UNESCO.
Then we visited the Changu Narayan Temple, took some pictures, shared some important facts about the temple and its history. We then had our breakfast which took about an hour to get served.

We instigated our hiking at 10:15 AM from Changu Narayan Bus Park heading towards Telkot. The hiking trails from Nagarkot gradually ascend through the terraced fields and ‘Tamang Village.’ We often stopped to search Kafal on the way but were unable to find the ripped ones. The route of the hike (Changu Narayan – Telkot) is shown in the pictures below.

At 11:55 AM we reached at Telkot, from where we continued our hike approaching towards Nagarkot through the route: Telkot – JalapaDevi temple – Pipalbot – Nagarkot. During our hike, we asked tourist and local people about the hiking route. Since it was the first hike for about 4 or 5 participants, the excitement of hiking was not fulfilled. So we continued our hike through Jalpa Devi temple.

Most of the tourists were heading towards Changu Narayan from Nagarkot, but our hiking route was just opposite. After continuously walking for around four hours we finally reached Nagarkot Bus park, our final destination. At 2:05 PM, after getting there, we took some rest and had some food as we were famished. Then we went to Nagarkot Tower to view the beautiful sceneries and take some snapshot. We returned at 3:30 PM from Nagarkot to the Hotel for lunch and returned home.

Changu Narayan – Nagarkot is an excellent walking day tour on the outskirts of the Kathmandu valley.

Changu Narayan – Nagarkot is an excellent walking day tour on the outskirts of the Kathmandu valley. It is the best opt to escape from the hustle and bustle of Kathmandu. We can see the local villages remaining unchanged and still preserving their traditional culture, even though they are close to the city life.

59 thoughts on “Hiking from Changu Narayan to Nagarkot”