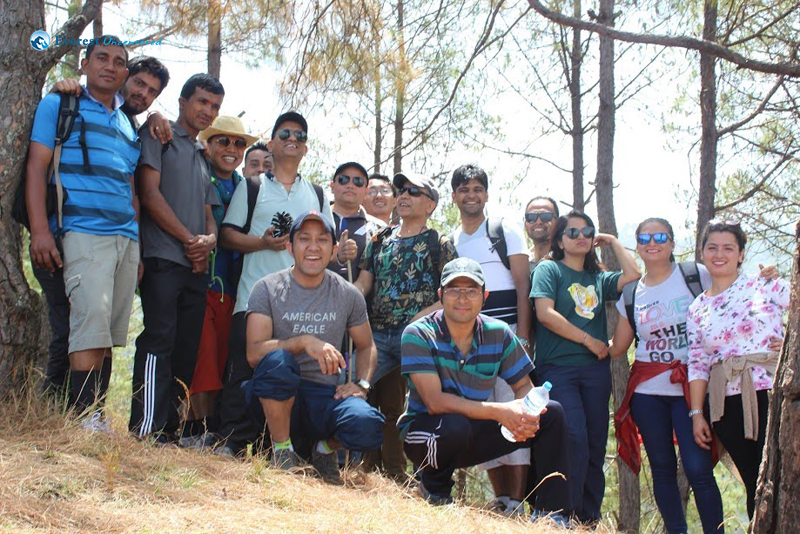 Pukar Dhital
The date was set for the hike but what remained mystery was the destination. And so it began, the Sunday morning, where rather perplexed the writer of this report wakes up wondering whether the hiking was for real! As I reached the DWIT premises, I was astounded to see, I was among the first four to reach the college for I knew it was no decency to have revved the engine at full throttle hurling my bike over the unfriendly asphalt, fearing I could be the last person to have reached the rendezvous point.

When best men meet, it is inevitable for something extraordinary to sprout! As for us i.e. me, Tej, Nirmal, Ujjwal and Narendra Sir, it didn’t take long to decide, (let alone the hiking) that we play cricket all the while we wait. And so it happened that in no time the basketball court of DWIT was full of cricket enthusiasts! Wonderful beginning to kick off the day! It was later to be realized that the game of cricket would act as a warm up for the- to be adventurous day ahead.

The air conditioned bus undoubtedly wascozy and comfortable and the new topic for the common gossip was certainly the recently finalized destination, which was a hike from Bhaktapur to Banepa. I was terribly disheartened so to speak. Adventurous by nature, I was expecting something exotic and challenging and on my mind- a river, where we could plunge into, if needed! How wrong I was! And to realize that, I was yet to live the day.

Our first stopover was in Bhaktapur, where we all seemed eager to gobble up the breakfast. In this case, the typical Jeri, Swari, Curry and a tea. Well, it was welcoming, I must admit. Lot many of us enjoyed the breakfast while few questions were in the air audible to ears remarking what was Swari, which rather amused me!

Having taken the breakfast and after a short ride on the bus, begins our hiking. After first fifteen minutes, I was bored, my friends next to me were bored, a quiet observer me-looked around only to find almost everyone was bored. And then I looked at Rudra Dai, no wonder he was bored too, may be agitated to some extent! Reason- a continuous walk on the asphalt which certainly none of us had expected on a hike! Few random questions to the passers- by asking the raw route through the jungles to Banepa and few did direct us but suspecting whether we could make it.

And finally we decided to walk off the road. It’s amazing how humans can find way or make their own way if only they are aware of directions. That was very much imperative to us in this case. All we knew was directions and we marched forward. We passed by the village, we passed by the fields, we passed by the vegetations and orchards and it seemed we had passed by the last known civilization on Earth!As we ascended uphill, little were we aware of the adventure awaiting us.

The steep hills, the continuous ascend, the off- trails are common assumptions for a hike. But what made this hike adventurous was the fact that we went beyond these assumptions. Travelling through the woods, the continuous steep climb and the heat of the day was certainly challenging and it gave us quite an adrenalinerush when many a times we found ourselves at the dead end where there were no trails! But we didn’t turn back or altered our directions. Instead we made our own trail. It reminded me of a line from Robert Frost- one of my favourite poets,

‘Two roads diverged in a wood, and
I took the one less travelled by,
And that has made all the difference.’

Putting aside the literal meaning, yes indeed it did make a difference.The narrow alleys, the glades in the middle of the hills, and the thick foliage blocking our ways uphill were all an intricate part of our hike. Few of my friends staggered but the generous helping hands were always at the reach. Couple of times my good audacious friends Tej and Nirmal raced up and downhill with a sudden burst of energy perhaps to grab the unseen prize! The major portion of the hike was travelling through the isolated almost alien part of the hills where no accessories of the modern world were at sight. This certainly was a unique experience in itself for that was the time perhaps many of us realized our connection with the nature; at least I felt that way! Those unfriendly yet adventurous trails made me wonder about our distant ancestors- the nomads,who had travelled to unknown destinations to explore and in search of better place.

The raven looked curious flying at the high altitude perhaps disturbed by our unusual presence for it must have realized it was no route to the bipedal beings like us. Nevertheless, the hills,however, welcomed us with the wild berries which were quite a treat and not to forget the scars which we had received walking through the thick shrubs and bushes! But I consider those a raw welcome- that’s the nature’s way.

Finally, walking downhill led us to the village where I was saddened to see the poor condition of the domesticated cows. In one of the families, I took time to observe and stroke the cow. Its eyes were imploring me to help. Irequested the family to loosen itsharness which not to my surprise fell into the deaf ear. Almost tormentedand embarrassed being helpless, I quietly made my way through for I was on my own journey.

The raven looked curious flying at the high altitude perhaps disturbed by our unusual presence for it must have realized it was no route to the bipedal beings like us.

After almost eight hours of walking bruised, battered, and exhausted we finally made it to the bus which was waiting for us at Sanga. Relieved we were to know that we would be heading to Banepa for the food. And what a welcoming treat it was- a proper and exquisite Thakali food at V.I.P Thakali and to beat off the exhaustion beers, wine and soft drinks rejuvenated us almost instantly. Just when we thought we ended up the day with a rich meal, the unforgettable, creative, humorous and entertaining Dohori between Nirmal and Bijaya Dai on our way back, occasionally accompanied by a sudden rap song by Hitesh Dai made us forget our tired limbs and undoubtedly lighted us with joy of unknown pleasure.

As the bus came to a rest at DWIT premises, all we had was but memories of an unforgettable and an adventurous day. We were nostalgic to have missed yet another unique day butour tired mind and limbs were yearning for more adventures.