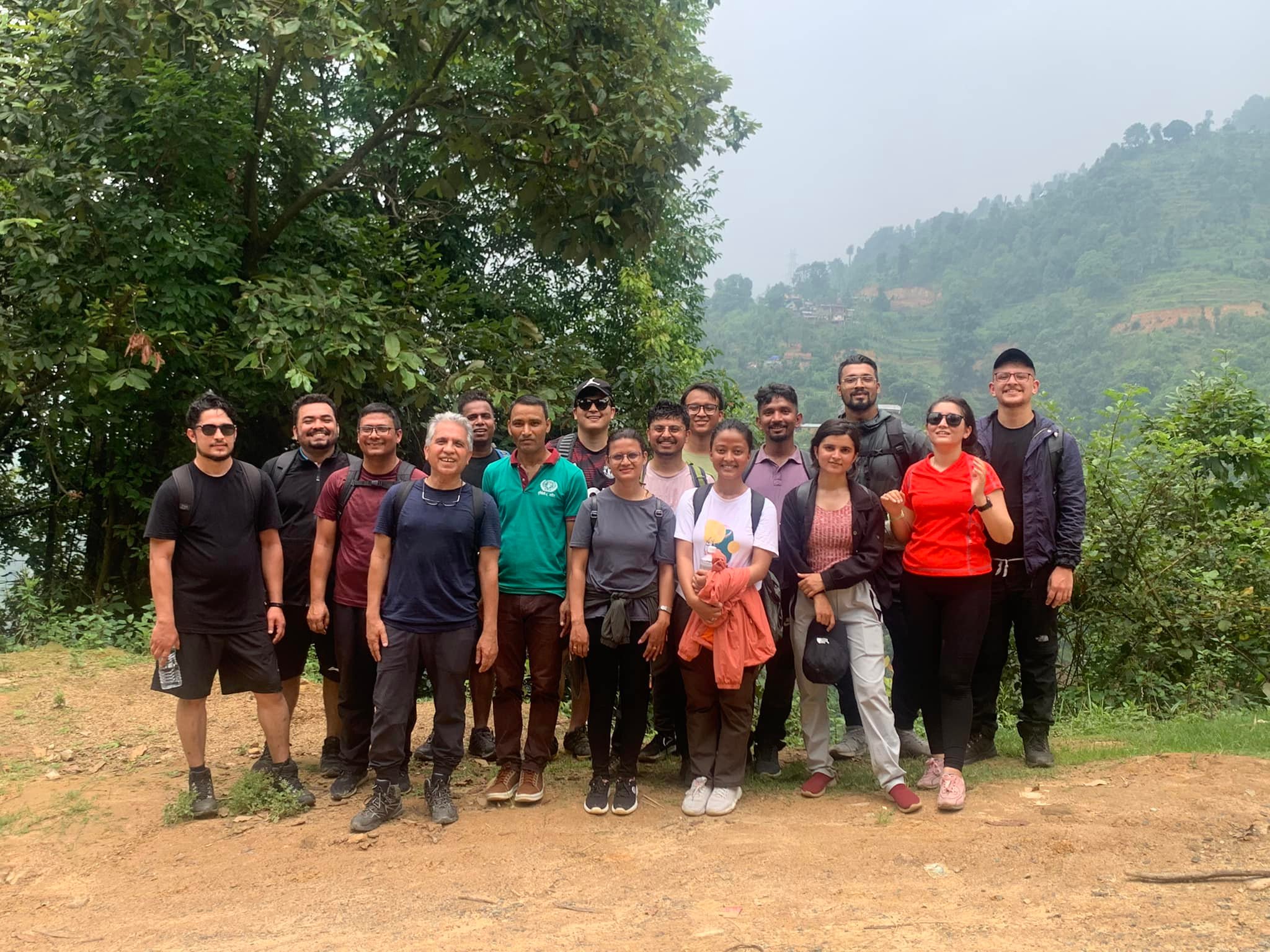 Our excitement for this hike started from when Sandeep dai emailed us with the interested list of hikers.The origin point of the hike was Naubesi. However, the destination was not decided.The meeting point was at Deerhold office sharp at 6:30AM. While we waited for everyone to arrive at the office, we were given a healthy and protein-filled breakfast (chana, egg and jerry) and some snickers and kurkure to prepare ourselves for the hike. We were talking about how roads would be full of leeches and we would be at the high risk of leech biting. We were already worried however some among us were trying to comfort us by explaining how leeches only suck the impure blood and it’s no harm to the body.

It was time for us to head to our hiking starting point i.e. Naubise. It took us about 2 hours to reach Dhading from the Deerhold Office. After reaching there at about 9:30 AM, we visited the school that Rudra dai had been supporting financially and got to know the ins and outs of how the school is being constructed. After a quick site visit, we headed towards our starting point where all the hikers were offered some cucumbers plucked fresh from the farms to munch in during the hike. We started our journey uphill towards our first spontaneously planned destination, a beautiful waterfall, “Dovan”. This was probably the toughest section of the hike where we hiked for 30 minutes straight uphill on an inclination of over 45 degrees. Upon completing the hill, a quick 10 minutes of downhill gravel road led us to the waterfall. Along the way, we had fun, casual talks with Rudra dai and the team. Not to miss the most gripping part , clicking the group photos to cherish the memories. Rudra dai mockingly offered us a selfie with him for $10.

Reaching the waterfall, we took some photos, cut some cucumbers that we enjoyed with the “Nun Khursani” that was packed along by one of the hikers. Weather was really unpredictable as the scorching sun quickly turned into a downpour within a few minutes of our arrival at the waterfall and we all had to cover ourselves with umbrellas and raincoats while journeying back. We returned the same route that we came along and continued our hike towards the next destination, which was Seti devi temple on top of another hill. We had to go down the entire hill and climb up another one. By this time, we were utterly confident that we were not going to encounter any leeches that day but that quickly turned out to be wrong. After the rain stopped, dormant leeches started to become more active. The rain also flooded a river that we had to cross to get across towards the path on the next hill. We had no other choice but to open up our shoes and cross the river barefoot and so did we. The sharp rocks on the river were really a nightmare on those barefoot, not to mention the leeches getting stuck on the foot. Due to exhaustion, leeches had become everyone’s least priority and reaching to the destination was top on the list.

We continuously began our hike upwards. Though it was not as steep as the earlier hill, exhaustion from the previous one made us feel this one was not forgiving either. But we had our hopes high so we kept walking one step at a time, closer to the destination with each step. We picked some raw mangoes and peaches along the way and were deliciously devoured. By the time we reached the temple, we were at the brim of exhaustion. Sekhar dai suggested everyone to meditate while he rang the temple’s bell. It surely was a serene moment to feel those cool breeze hit our sweaty foreheads while the enchanting sound of the bell rang in our ears at full magnitude. With not much time to waste, we again started our journey back to our pickup location. We were to be picked up at the highway near Naubise a few kilometers from where we started. With laughter, some photos and rest along the way, everyone walked with a bit more energy than before with the hopes to finally have a hearty meal that was waiting for us at Naubise. We were received by the office vehicle at the pickup point and we went to Nribeswor Khaja and Khana Restaurant where everyone enjoyed an unlimited supply of chicken, mutton, beer and lunch. After lunch, everyone was so tired, we could barely hear any talk in the vehicle. However, with some jokes from Rudra sir and laughter along the way, we reached the office and everyone departed towards their homes, tired, waiting to collapse in bed and wake up with a new energy for yet another challenging week at Deerhold.