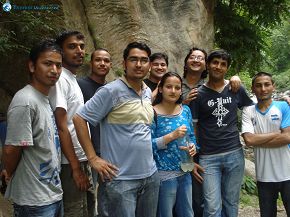 Report Section
Waking up early in the morning has never been a favorite pastime. Geared up though, for the planned Namobuddha hike, reached office premises at 6:15am only to know that no-one else is excited enough. The second person to arrive made me wait for 10 long minutes. And, in another half an hour or so, I could count to 9 of us. It was Mahesh and Prajwal, the most experienced hikers among us, who decided to change the plan. We were all convinced to go somewhere else than Namobuddha by the time we stepped into the van.
At 7, the van moved to lift Bharat at Tinkune and then Ratna at the main crossroad in Banepa. We were going to the Last Resort, which required some bucks for bungy or swing – thanks to the NIBL ATM right where Ratna waited for us. Most of us were ambivalent and quite thrilled by the idea of bungy. Bharat says – “In my case, there is little confusion if I can do it or not. There is also another factor which is disturbing me so much. Last night when I was asleep, a dog cried continuously. According to the Hindu religion this is a bad symbol. So considering this, I was not able to make a decision. After some time I decided that I will go for it.” One thing I am pretty sure, all others in the van were also looking for a reason to refrain the jump.
We had our breakfast at Paanchkhal at Sharmila Bhojanalaya. It was Bhotekoshi flowing along by the side while our van took speed towards the final destination. Mahesh and Sanjiv were sharing the experience they had of rafting listening to the concord Bhotekoshi. Bharat, inquisitive about knowing whether a bad swimmer can also go for rafting, got replied positively.
The van stopped. We read “The Last Resort” on board, at the side of a long ‘Jhulungepul’. The resort laid on the other side of the bridge, we had to cross it and there it was. Koshi was wild below. Everybody seemed excited now. Upon reaching the resort, we had to register for keeping lives in risk. Five of us did for bungy, 6 still not ready including me. Five of the unregistered thought – “Rather a next trip even more planned would yield us a chance for both swing as well as bungy”. Sarita, however, wanted to get registered. But, we went to the bank of the river after some 45 minutes descend to watch people tied by their feet falling off the bridge. Sarita still unsatisfied returned to resort to register for a swing.
It was only 3 of us left at the bottom of the hill looking whether every next jump is from a D2 hiker. But, it took exactly 3 hours to find Sarita swinging by the rope. Then one after another, 5 people – Mahesh doing the first for having weighed the heaviest – experienced their moment of the lifetime. Bharat says – “At last my turn came because my weight was least among them for Bungy and they sorted people according to the weight. They provided us all the information for this and I was fully equipped with the materials to go for Bungy. Then I gave the interview with the camera person. He was asking my name and some notes from me. I gave my name; I remembered my family and friends as well as Nepal. When he focused camera to me I was still smiling and I don’t have any types of fear. Then they let me go at the place from where we have to jump. When the bungy master asked me to put my legs at the end, my mind wanted to put it at the end but my leg and heart didn’t follow it; there was little fear. I was still looking at the camera with smile. Finally I put my leg at the end and then I looked at camera. Then he counted…. 3…2…1… and I made my jump. Now I can’t describe the moment. It is so much cheerful. I have done this type of flying in my dream but now I am also doing it at reality. I was so much excited and interested. As they told me to put my head down, I was doing it. When I reached the button the elastic rope again pulled me upward. When this moment occurs there will be little fear in heart. Then more excitement and cheer will come in the mind. Then I again go downward. In my case I was just performing the looping. After then it is stable and then I went to the near to the ground slowly and slowly. Then I caught the bamboo and finally they took me to a bed for rest. After then I was still thinking to do it again because of the sheer excitement. After then I was much excited and too much fresh.”
All excited, took few pictures and then climbed up the same slippery way back to the resort. Checking video playing there, the jumpers wanted to buy it for few more bucks. Then we headed for Kathmandu, we had to have dinner at Dolalghat. It was quite an experience.

0 thoughts on “Trip to The Last Resort”