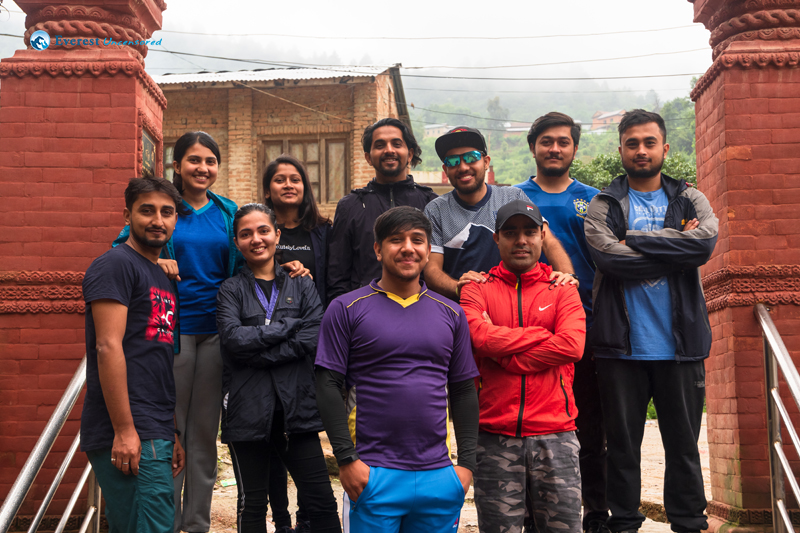 “In a faraway land,
lies a mystical fall
that heals your fatigue
and captivates you all …”

This is the story of Simba Falls, a secret waterfall in the heart of Lalitpur, around 50 kilometers away from the hustle and bustle of Kathmandu city.

On September 14, we set out for a hike to Simba Falls. All of us gathered at Deerwalk premises by 7:15 in the morning. At around 7:30, we started our journey. By 8:30 we were already at the Lele Buspark. We had some breakfast in a local eatery. It was drizzling a little while we started traveling through the bumpy and slippery road. After four hours of a long ride, we finally reached the starting point of our hike: Gotikhel, which was somewhere between Bhardev and Manikhel. The sun shined brilliantly, and the weather was just right for the hike.

According to the locals, we were thirty minutes ride away from Manikhel and another thirty minutes ascend to reach Simba Falls from Manikhel. So, we started walking. It was a beautiful trail, with hills surrounding us and picturesque cornfields on both sides of the road. The locals offered us some cucumbers from their farm, which came as a rescue to our hungry bodies. It took us around two hours to descend all the way to Manikhel through the so-called ‘shortcut route.’ We were slowly and gradually getting exhausted.

We took some rest at Manikhel, but then we realized that our main hike had just begun. It started to downpour as we were trying to cross the river. A weather-beaten bridge with only three logs placed side-by-side with no ropes binding at all stood across the river. We had to cross the river with the help of this primitive bridge. The rain made it much scarier to cross, as the log was slippery and the river was rushing. Slowly and steadily we crossed the river, helping one another.

Without wasting any more time, we continued our hike to Simba Waterfall. The path was along the base of the waterfall. According to the hearsay, we were supposed to reach Simba falls by the next thirty minutes, but we were startled as we were not even halfway to our destination during that timespan. We had to cross the same river many times with waist-deep water tugging at us. Due to the heavy rainfall, we were drenched, and also the path was slippery. The trail got really dangerous. After an hour and a half of tedious walk along the dangerous pathway, we finally reached the top.

The water flowing through the waterfall was really cold, just like its name ‘Simba,’ which means ‘cold’ in the Tamang language. But when we reached the top, the tassel was worth the hassle. It was around two in the afternoon. The beauty of that place was really hypnotizing. We took a lot of photos, but couldn’t stay there for long as it was getting cold and we were getting late. Also, we were all hungry and exhausted by then. We had eaten nothing but breakfast and some cucumbers. We returned the same way. As we were ascending, our destination was ‘Simba Falls,’ but as we were returning, all we could think of was a heavy, sumptuous midday meal. At around four we reached Manikhel and snacked.

The most challenging part was the return journey. We had to climb the hills which we had descended for two hours, but we were already exhausted by the endless hours of walking. One of the locals came to our rescue and gave us a lift in his truck. Although we got hitchhiked to a measurable distance, we still had a long way to go before we reached the starting point of our hike. It was around seven in the evening when we reached the spot where our bus was waiting. It was already dark by then. We were all pretty exhausted and hungry. We reached Bhardev at around 7:45 and had our dinner at ‘17 Jhyaley Homestay.’ At around 10 pm we reached the office and departed to our own destinations.

To sum, Simba Falls lies quite far away, and the trail is difficult, but it’s worth a getaway from the chaos of the Kathmandu valley. No matter how tired you get on the way, the beauty of nature will make you forget everything the moment you reach Simba Falls.