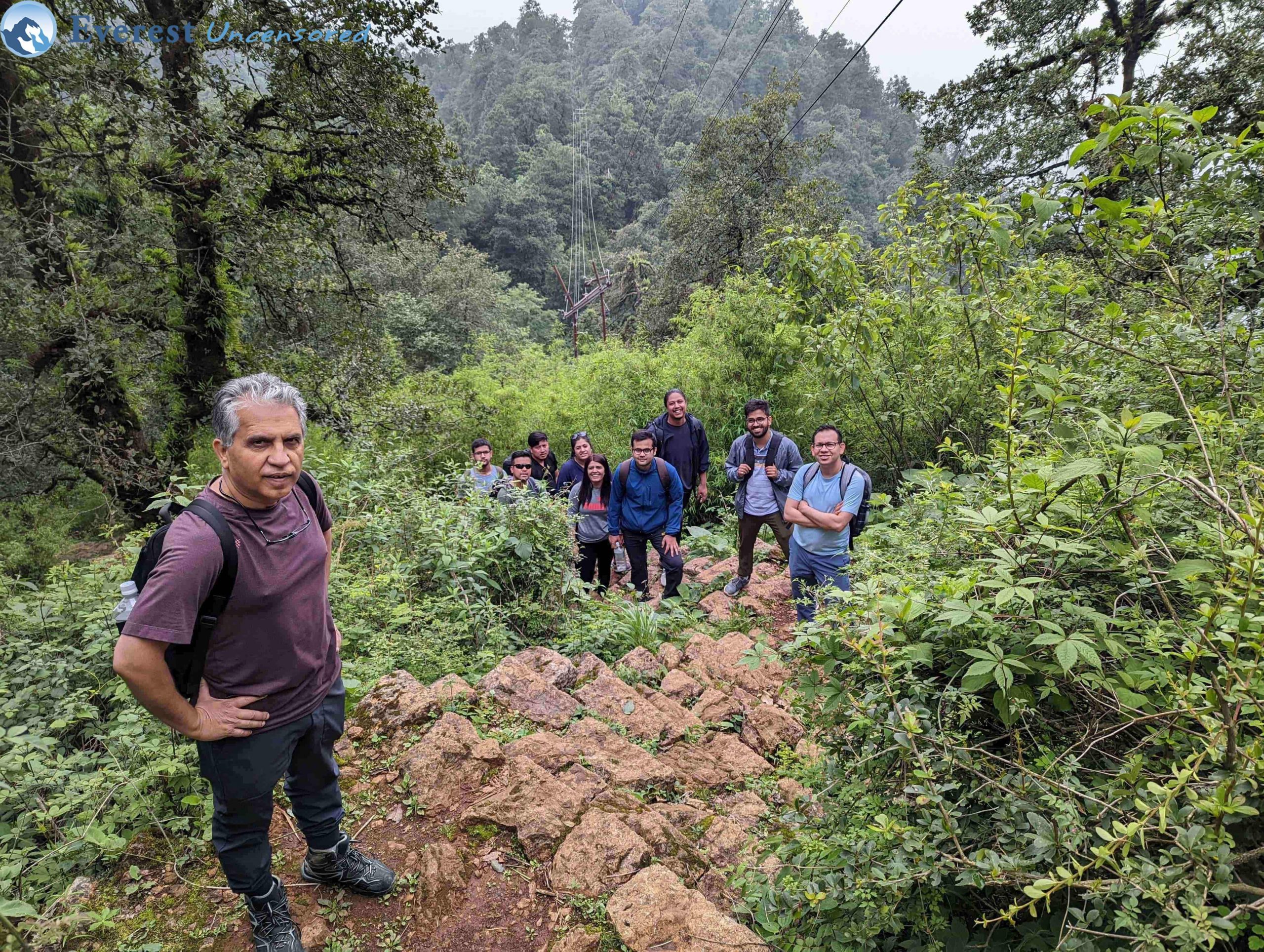 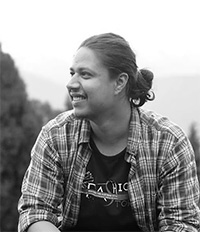 On the morning of June 12th, at 7:00 AM, we assembled at the DWIT Compound and had our breakfast there. It was going to be the heaviest meal for the day so we didn’t back down on munching it all down. After a delicious meal in 109 that included eggs, jeri, chickpeas with puri and tea, our trek started from 109. After a short ride of around 30 mins or so we reached Godawari and started our ascend to Phulchowki on foot.

We started on a gravel path with a somewhat dense forest and a refreshing environment. After a climb of about 30/45 mins we came across a small area abundantly decorated with prayer flags that surely brightened our mood. We took multiple shortcut routes with made up stone stairs ( wondering how much effort it took people to build that structure in regards to the knotty geography ). Thankfully the weather was on our side and favored us all day long as it was cool but didn’t rain.

As we took a few more shortcuts on the way and it was testing our endurance ( as we all were not regular hikers ). We took multiple breaks and kept hydrated on the strenuous climb. But with regards to all the earlier shortcuts we took, the last one made us think twice, as the climb was very stiff and slippery. Some of us even had to use both our hands and legs for the climb ( fortunately no one got hurt ). But as a reward the higher you climb, the views become better and better. After having some fruits and nuts along the way, we were energized and kept our pace. The journey was followed with interesting experiences and stories of Shankar dai and Rudra dai which was a fun experience.

Along the way we could see a lot of forest vegetation, mostly “Nigalo“ ( Himalayacalamus asper ), wild mushrooms and other suburbs ( that were unknown to us, as we were not very bright botanists ). For me it was an escape from the crowded polluted Kathmandu city. Further following the gravel path through the dense forest, we come across cycling trails and small check posts and even some uninvited guests “leeches” on the way. One of the interesting structures we stumbleupon were two rocks in the shape of two lions sitting beside each other. The local people called it “Bagh Baghini” and worshiped it.

At this point it had already been about a 4 hours walk and the strain was starting to show on our faces, but as the weather was on our side and the views of Ganesh Himal, Langtang Himal, and Gaurishankar Himal to the east helped us continue without a second thought. We finally reached the top at around 1:30 pm ( we started at 8 am from godawari ) . It took us 5 hours to get to the top. There we saw a small temple dedicated to Hindu pilgrims on the top, which was decorated with prayer flags protected by the nepal army. The top is situated on an altitude of 2700m which may be the highest around Kathmandu valley. The view from there was amazing and we enjoyed every minute of it. Fortunately we had brought the leftover breakfast from the morning and started munching on it. Interestingly the army offered us some great tasting “black tea” ( Thanks to “Dev Dai”, who was with us on the journey).

After resting there for half an hour, we started descending the same way we came, We took few shortcuts down and started to enjoy it as we were descending down really fast, but unfortunately one of our college ( Pawan Dai ) got his legs sprained and we had to ask for help with vehicles that were descending on the trail. We stopped a group of bikers on the way and asked to help us carry him down, they agreed and offered Pawan dai a ride down. Finally we were almost down and decided to call our vehicle a little up the road, but decided to take a last shortcut to descend a little down. Which for few of us was a big mistake as it was a shortcut to the very beginning of godawari. Considering the 5 min descent it took us about 1.5 / 2 hours to complete the path. We were already 15/20 mins down the path and there was no way we were climbing back up. So we kept going along the path. It was slippery and our legs were starting to give up at this point. But after a struggling descent we finally reached the bottom. I was personally so happy to see the vehicle. We made a stop at newa ghasa, re-energized with a delicious meal and returned home with interesting stories from Rudra dai on the way back.