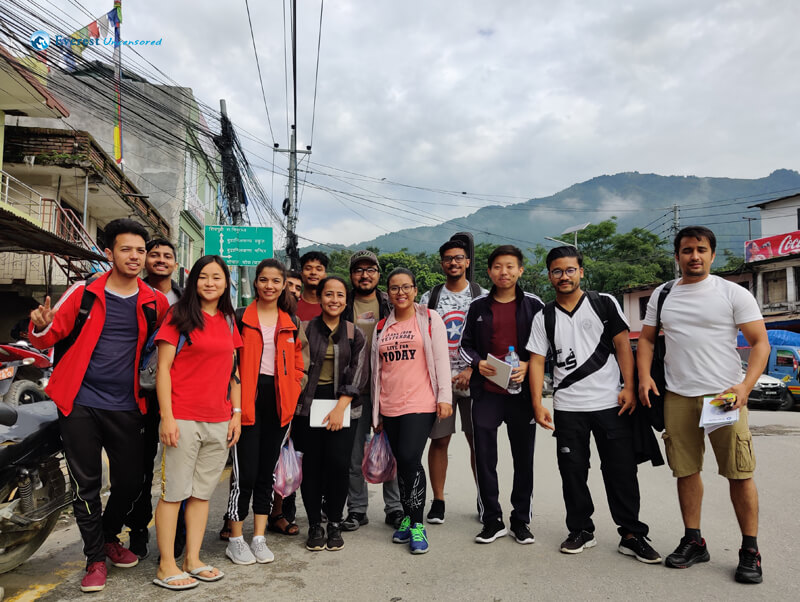 Bibhushan_Jha
Good thing about living in the Kathmandu valley is that you don’t need to travel too far to enjoy the beauty of nature. After a hectic week there are so many hiking trails where we can go to refresh ourselves in the weekends around the valley. We, the new employees who joined Deerwalk in 2019 decided to go for a hike to Nagi Gumba on 3rd August 2019.
At sharp 7 in the morning we left Deerwalk premises on the office bus which dropped us off at Budhanilkantha bus stop. We then had an awkward 30 minutes’ walk till the resort where we had breakfast. That was when we all sat in a round table and started introducing ourselves. As we all were new employees working on different teams, we finally got to know about each other only after that introduction session and all the awkwardness was gone after that. We then started our hike. The weather was pleasant, and we were all lost in the wilderness. Who doesn’t like waterfalls? We got to witness two beautiful waterfalls where we spent some time to take pictures and refresh ourselves with that chilling water. The small wooden bridges over those springs were so slippery yet mesmerizing that I could see in everyone’s eyes how joyous were they walking on such beautiful trails. Then we finally moved towards our actual destination Nagi Gumba. We had to fight nature to reach there because it rained so hard that some of us who were slow to get their umbrella, or a raincoat out got drenched. Most of ours blood is so appetizing I guess because it attracted so many leaches. It was a tough walk, but finally there we were, in our final destination, Nagi Gumba.
Those peaceful Tibetan chants and sound of their mystic horns were so soothing that it relieved us from all the tiredness and stress we carried from the walk. There we met some young disciples who were living, studying dedicating their life there to become a monk. We gifted them some notebooks and pencils. They were quite happy and wished us “tujey-chey” which meant “thank you” in Tibetan I think.

Then we headed back. It had stopped raining so that our descend was not that tough and also, we were going back from a shorter route. It was 5.30 when we reached Budhanilkantha bus stop where were picked up by our office shuttle and dropped us to office at about 6pm.

Pratik Poudel
From a newcomers perspective at Deerwalk Services, it was not uncommon to know only a few faces from the Organization. Having worked at Deerwalk for time ranging from days for some colleagues to months for others, it was about time we got to know each other. And what better way to learn about each other than going on a trip together? So, the wonderful plan for 1 day hike was conceived. All the 14 of us were quite excited about the hike and the next phase was to decide on the route of the hike. It took us quite some time to plan and finally we all agreed on going to Nagi Gumba, starting our journey from Budhanilkantha- BishnuDwar- Nagi Gumba and returning back to Budhanilkantha. Our first hiking as a team of newcomers at Deerwalk was finally going to happen in 3rd August, 2019. We all were exhilarated by the plan and what was about to come. All of us were to reach the Deerwalk premises by 7 am and from where our journey would begin.

It was a beautiful morning with clear skies and the weather near perfect for hiking. Due to the excitement, some of us arrived at the venue early and started our morning by playing Table Tennis as we waited for the remaining team members to arrive. Meanwhile, essentials for the hike(Water Bottle, Snacks, Fruits, Guitar, Notebooks and pencils etc ) were loaded onto the vehicle as we prepared to commence our journey. And as everyone arrived on the venue, we departed the Deerwalk premises at 7:30 am . We headed for Budhanilkantha to start our trip and as we reached there we stopped for a quick group photo before we started our hike and then after committing that we would have our breakfast once we reached the resort up-top, we marched onwards. Along the way, we treated ourselves with water, fruits and energy-bar to compensate the fatigue. We kept on checking our activity tracker app to check how far we reached from time to time. Every now and then we stopped for a photo, our friends were very dedicated and kept on capturing every moment possible. Our official camera person for the trip , Bodhita and Prabish, handled the photo/video department with finesse and great ease. Meanwhile, other members also assumed the responsibility of camera person when it was required. Along the way, we sang various songs on the top of our throat and even though it was so serene, we couldn’t help but declare our arrival to the nature because our enthusiasm was so high. After conquering uphill for quite some time, our stomach started to feel a bit hungry, we were looking forward to having breakfast and were waiting eagerly for the place where we could eat. And just when we were feeling hungry, there it was , A resort, which name I vaguely remember, but the moments spent there will not be forgotten.We stayed there for breakfast and while the breakfast was being prepared, we wasted no time and started to play a small segment of Introduction of each members as we all were gathered in the same place, followed by it was the segment which helped us bond even more, ”Musical Session”. We sang along to our colleagues as they(Bibushan, Bodhita, Upama) played the guitar and we created a beautiful memory to reminisce for the rest of our lives. After we finished some symphonies, breakfast arrived and we dove right into it.

After finishing breakfast, we wasted no time after being rejuvenated and resumed our journey to BishnuDwar. We joked around with each other along the way as now we started to feel more comfortable with the rest of the team and our hike group members kept on shuffling at different times as we started to enjoy with everyone. I think that’s the whole point of hiking, enjoying your journey with the ones who are with you at present. Our journey continued with our excitement level growing with every step as we were heading for BishnuDwar to witness a small waterfall but brought a big joy in everyone’s face. We stayed there for like 20 minutes where we clicked some pictures and there was also a small area by the waterfall to worship and there was some carvings in the stone and statues of Gods adding more value to the place. After that, we headed to another waterfall nearby as everyone agreed. We walked for some time before we reached there and along the way , we saw a dog following us and some of us (Arshiya, Samikshya, Upama) petted the dog and it followed us to the next waterfall. The next waterfall was even more mesmerizing than the previous one because it was large as well as somewhat difficult to get near the waterfall because of the slippery stones. We stopped there for a bit to take some pictures and enjoy the view. We enjoyed the close view of the waterfall and we were careful not to wet our shoes, some of us(Sara and Bishal) were carefree and enjoyed splashing water to each other, without caring about the shoes and enjoying at the moment.

We climbed back to the top after spending some time at the waterfall we had to continue our journey but before that we took some rest and we played a little game of “What If” ? We(Bishal, Yugesh,Deepak,Rujal,Bodhita,Prabish/Bishwas) were provided with “What if we encountered a Tiger at the very spot? ” after enjoying some fun interaction on the question we moved onto the next segment as everyone arrived to our spot after enjoying waterfall time. We enjoyed another Musical Session there. While some enjoyed the session sitting and singing along to the songs, some of us(Amit/ Bishal) enjoyed the segment laying on the ground looking at the blue sky. After that wonderful moment, we commenced forward to our main destination- Nagi Gumba. This time we took the musical segment with us by playing guitar along the way and singing along.

On our way, things got a bit challenging as the weather, so clear a while back started to change its colors and the next thing we knew, it started to downpour heavily. We started protecting ourselves from the rain using raincoats, Umbrellas and even plastic bags. As we moved forward the challenge grew even more, the roads were slippery now and with the slippery roads came the leeches, which troubled us a lot along the way. Sticking to our bodies, sucking blood, it really gave us a hard time while travelling in the slippery roads. After some time the rain subsided, but the rain scattered our groups but we had those leeches by our side and after quite some time we all got together in one place just behind the way to Nagi Gumba where we stopped for some snacks and photos and also to get rid of leeches. They had to leave us after some time, right?

After that, our legs were having a hard time with all the hours we put onto the hike and we kept reminding ourselves that the main destination was closer than ever and so we moved forward, taking the pain with us with the intent to drop it at our destination. After walking for about 30 minutes we reached the destination- Nagi Gumba. A perfect place located in the middle of the hills just perfectly, the environment there was so jubilant and everyone of us were uplifted by the environment. Those peaceful Tibetan chants and sound of their mystic horns were so soothing that it relieved us from all the tiredness and stress we carried from the walk. Our main objective of the hike was not only to reach this beautiful place but also to provide reading materials to the young disciples residing in the Gumba. So, after waiting for some time for the young ones to gather around we distributed materials in their hands and the young disciples reaction to that was worth all the things we went through along the way. That moment is hard to put in words and its meant to be experienced by everyone at least once in their lifetime.

It was about 4pm after we finished distributing materials at the Gumba and now we were prepared to return back to our starting point and we went downhill until we reached Narayanthan and we slowed our pace a little as we were tired and reached Budhanilkantha bus stop at 5:30 where we were picked up by our office shuttle and we went back to the office and that’s when our Hike officially ended.

To end this on a high note, I would like to add that “It’s not about the destination we should look forward to, it should be the memories we make in that journey.”