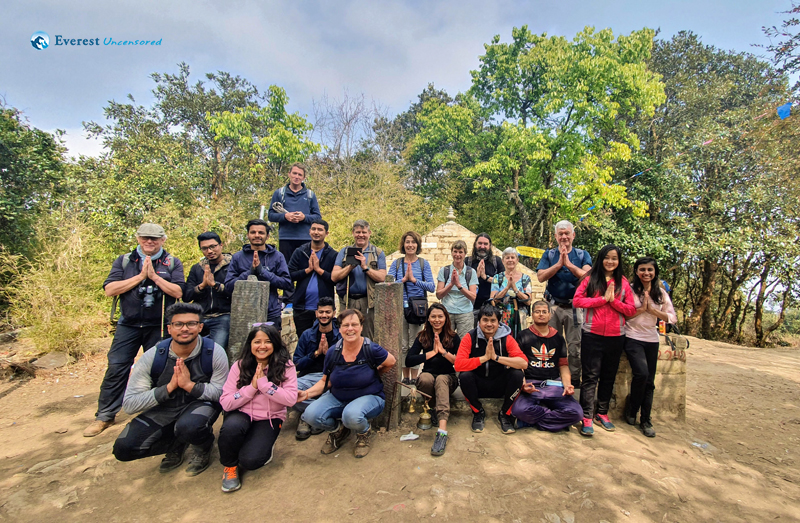 Anjila Neupane
Squad A had planned to hike to Champadevi, and this was my first hike. We set out to start the hike at 7:30 in the morning from the office premises, but it was already 7:45 when I reached the office. Waiting for a few other hikers, it was around 8:15 when we left the office. On our way, we picked up a few more hikers. We stopped at a local eatery in Balkhu for breakfast and bought some snacks, juice, and bottled water for our journey ahead. We then officially started our hike from Hattiban Resort at around ten.

The dirt road through the pine forest gave me the vibes of being far away from the chaotic city. We could see a bunch of tourists in front of us, heading toward the same destination. Climbing the hill for half an hour, we could see a cycle racing event. As the path went through the forest, we were confused about the right way a few times. We were climbing up the hills, resting every half an hour, munching on some snacks. Some of us were clueless about how much we had to walk to reach the destination.

After one and a half hours of hiking, we realized we had to descend the hill in the stairs and climb them up again. I wished the path was straight enough, but it’s never fun when it’s easy. We were all walking, thinking Smriti Di was leading us all, but as we finished descending the hill, we came to know that Smriti Di had lost her way and reached the Gumba nearby. We all took some rest there, and Ganesh Dai went to find Smriti Di. Until they both were back, we rested for around half an hour. Climbing the stairs uphill, we were all exhausted, but taking photos and eating snacks on the way added more life to our journey.

We thought we reached the destination when we climbed the stairs, but we were demotivated to find out that one entire hill was to be climbed. Following the grassy ridge, we reached the temple after 3 hours of hiking, all tired and hungry. We took a rest for a while. The place was so quiet, but a little disappointing to hear about the litters of tourist hikers. It would have been better if we could please them with a better environment. There we met the same group of tourists we had met while starting our journey. We all took a group picture with them. We had our snacks, took a lot of pictures, and descended downhill. There was still a long way to go.

Returning was the challenging part of the journey as we were already tired, and walking downhill through the stairs had given us some pain in the knees. But we were all chattering and having fun throughout our journey. Had the weather been a little more clear that day, we could have seen a better view of Kathmandu valley. We followed the way to Taudaha, searching for shortcuts through the fields and narrow slopes downhill and a place to eat. We reached Taudaha after walking for around 6 hours. All of us were exhausted, and pin-drop silence prevailed for a few minutes in the Hiace while returning. We stopped in Jawalakhel to have a Thakali set as we were all hungry. We reached the office at around 5:30 PM and departed to our own destinations.

No matter how exhausted we are on the journey, being close to nature always gives positive energy and brings peace to our minds. No wonder this hike will be one of the most memorable ones for me.