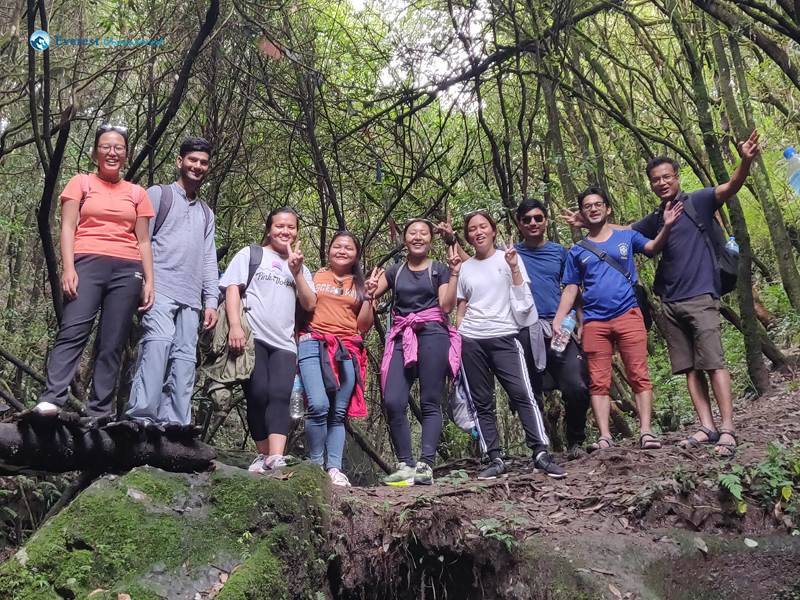 Sabin Pathak Hiking is not a new thing to me, but the people with whom I was going to share the trails of Shivapuri National Park – Bishnudwar – Nepalese Army Shivapuri were new to me. I recently joined Deerwalk Services and this was my first outing from the company and was very excited to go on a hike. As per the email sent to all the interested participant, the van was scheduled to leave the deerwalk premises at 8:00 in the morning. There was some delay and the hiace actually rolled out of the gate. There were empty sits waiting for five other hikers who would be picked up at the route. It was at Maharajgunj when all the people who filled the forms were together.

The hiace stopped for breakfast after half an hour of drive. The tea-shop that we entered served us with Alu, chana, eggs, roti and tea which we thought would provide us enough energy to walk through the forest of national park. Also, the backpacks were filled with foods which we would be using as snacks on the way. After everything was set up, we bought tickets to enter the national park as per the requirement of conservation authorities. The greenery arounds were mesmerizing and even better was the waterfall which we came across after short walk. Water is synonym for joy and fun and everybody started to capture those waterfalls in their cell phone. There were pictures taken with different angles and everybody was busy in giving different pose. People were so much into it that Shyam Dai had to announce that there were many more waterfalls on the trails to get going.

The weather was giving us good company and was very gentle with us. The trails were easy, but at instances we would encounter the slippery path from the leaves of pine trees. Also, there were uphill that tired everyone but it did not matter as we came across plenty of waterfall as per the previous saying of Shyam Dai and the breath-taking view of Kathmandu valley kept us moving forward. The uphill continued for next 1 and half hour until we reached our point of maxima for the day -Bishnudwar. The green leaves freshly bathed from the monsoon rain and the whistling of Bishnumati river relaxed our mind and body. The water was so clean and transparent that it made me think twice if it was the same river that curls through the valley. As per our hindu culture, Bishnumati is considered to be holy river and there was temple set up at its origin. Hindus come for pilgrimage and we did not miss an opportunity to offer prayer at such a holy site.

After spending some memorable time at Bishnudwar, we finally headed downwards and took at different path than we came. We walked back to the same plane road through which we had walked upwards and moved towards the barrack of Nepalese Army. The van was supposed to pick us up there, but it was not yet arrived. Good for us. Instead of waiting for the van to come, we planned to walk and hence headed towards Tokha which would be the new pick-up point for us. It was 4:00 PM when we entered into the hiace that had dropped us in the morning.

The food that we ate in the morning and snacks that we galloped on the way were all converted into energy and the body was searching for new food for combustion. Not every food could endeavor our hunger and every pair of eyes were looking for a place which would serve a thakali set. We stopped at Marpha thakali at Maharajgunj where they served us delicious foods. After thakali, some people waved goodbye along with the memories that they would cherish and others got into the van and went to deerwalk premises and got separated.

The first hike made me familiar with my seniors and gave me a lot of memory to cherish.

2 thoughts on “Hike to Bishnudwaar”