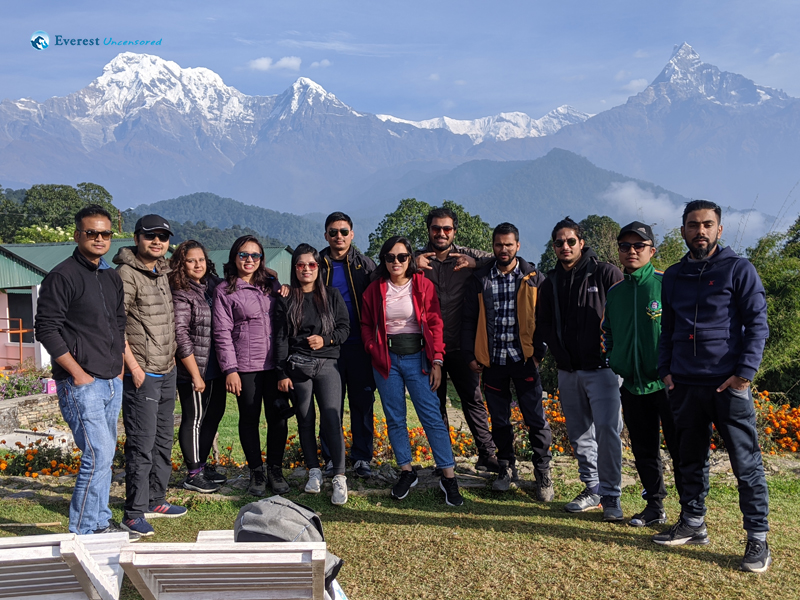 Prabin Ojha
“Oh, it was mesmerizing to see the morning sunlight spread over the snow-covered mountains. In that ecstatic moment, we felt as if the rhapsodic mountains were calling each one of us out loud.”

Did I miss anything? Of course, I did! I jumped the whole day of the adventurous trek. So fasten your seatbelt, this one’s going to be a sweet yet bumpy ride to the Australian Base Camp (ABC), starting from the Deerwalk Complex.

So, everyone was out there on time. The wheel rolled from Deerwalk Complex at sharp 6 am (not quite sharp, I reckon). Picking up on several stops, the Hiace was filled up and rolled out from the city at almost 7 am. Naubise was our first stop at half-past eight. The empty stomachs were filled with vegetable soup, tea, and donut. The clock was ticking, and the destination was far away. So, we traveled as quickly as we possibly could.

Our journey was filled with ecstasy. We listened to the different playlists from Birgunj (DJ Depenti), Dharan (DJ Moti) and DJ Sanjaya. We stopped at ‘Duna Tapari’ to grab a bite, but our reviews are *overpriced* and *overhyped*. One does not simply complain and walk away in the highway hotel as the options one gets are quite a few. A power nap after lunch was energizing for the big day to come. It was almost 2 in the afternoon by the time we reached Pokhara. We took a couple of minutes to enjoy the view of Pokhara from Sarangkot’s viewpoint while drinking “one-that-must-not-be-named.”

At half-past 3, we reached Kande from where we were on our feet. Loaded up with the stuff to carry, each one started to walk uphill. A group photo was mandatory to begin the trek with. The trail was relatively steep, and we walked up to the destination. After almost *(2 to 3)* hours of walking, the surreal view of the beautiful sun setting down on the western hills was seen. And we could see the beautiful guest house ‘Angel’s Guest House’ on the lap of hills, a *(ping)* stood down on the ground. Depenti, she couldn’t resist herself far from it for long, and with the blink of an eye, she was swinging high on it. Nisha didi, what could a photogenic person demand on the situation? I was thrilled by the happiness she was having.

The barbecue that night was the salvation army of the trip. The fire was lit up, birds were being smoked, roasted, and grilled, and Deerwalkers were mingling up with some tourists. Then, I realized the whole idea of trekking being organized by the organization. It was all meant for the employee to interact better, know each other better than they would have done within the office premises. That was a long chilly night, cold outside with dew dropping since forever, but the fire and rum rescued the cold. We talked from politics to lifestyle to personal life to the professional one, all in one crazy, sleepless night.

As the sun came out from the gloomy clouds in the morning, we felt rejuvenated. The mountains were never so white, and the sun was never so bright. We gathered together to capture the moment through the lens, but your eyes do the trick to make it look beautiful in real life than you’d otherwise see through the camera. “Oh! It was mesmerizing…”

No matter how much happier you’ve been, leaving the place you loved on the very next day does make you sad. We walked down from the Australian Base Camp to Phedi the next morning. It was almost 4 hours of walk downhill to reach Phedi, where the Hiace was waiting. From Pokhara, we reached ‘Mahili Thakali Bhansa Ghar’ at around 12:30. The authentic taste of Thakali khana fused with the hungry tummies created the euphoria, which I cannot explain in words. The last shortstop for the day was Malekhu. The vehicle then rolled straight for the valley.

It was late by the time we reached Kalanki. And we bid goodbyes to everybody, one by one. The hike was over, and oh yes, the bumpy ride to the Australian Base Camp was worth it. It turned out to be more than what we had expected, and I smirk as I keep scribbling for this blog. Hence, the 2-day hike of the Mentor’s Club 2019 to the Australian Base Camp ended with splendid memories.

Bonus tips (If you are planning to visit the ABC):

Make proper reservations, as ABC is the last stop for all trekkers from ‘Annapurna Base Camp’, and ‘Mardi Base Camp’. The camp is always crowded.
Carry your own ‘paper cups’ (if planning to drink or so) to avoid spending Rs. 20 for one paper cup, and Rs. 100 for one glass cup.
The place is a bit pricey, so don’t mind carrying extra bucks. 😉