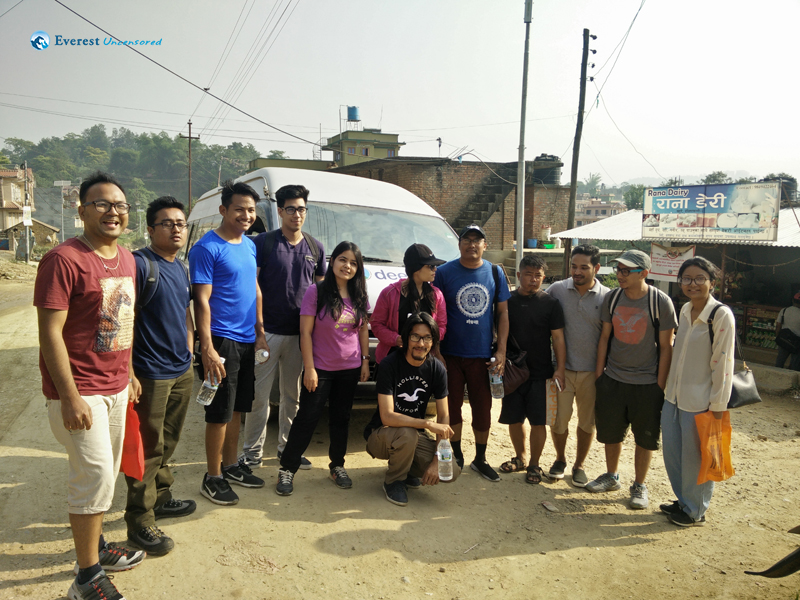 “FILL YOUR LIFE WITH EXPERIENCES,
NOT THINGS.
HAVE STORIES TO TELL,
NOT STUFF TO SHOW.”

First of all thanks to Deerwalk and Binod dai for letting me to be part of this wonderful experience. Let me begin with a confession, I always have travel bug in me. I always wonder new places to visit. When I heard about the hike to Champa Devi, I referred Google and the majestic images in it invoked an inspiration in me to visit the place even more. So, after everything was confirmed from my office “Deerwalk”, I listed all the necessary stuffs. An alarm of 5.30 a.m. was set as the bus would leave for Taudaha very early the next morning. I slept like a baby contended with the idea to travel.

The way from Kathmandu to Taudaha was fine and it took around 30 minutes as we were picking up other members on the way. Taudaha itself is an amazing place so I was hyper thrilled thinking about how Champa Devi would be like.

We had breakfast to boost ourselves for the way up. It was just 8 am but the weather was too hot. As we walked that unsung terrain, consciousness began to pour into my body and slowly I felt as though the very soul of Mother Nature had welcomed me in her grace. I realized how lucky we are to born in a country with so much magnificence in it.

At some point, we were confused about the way, so we asked for direction to Champa Devi to the people on the way, but the GPS showed us the wrong directions. Nevertheless on that day our legs had their own thinking and they were kissing the paths they walked. ‘Not all the wanderers are lost’ they say and that day we knew why.

The first hour was easy to walk, our body was filled with adrenaline rush and we were taking pictures on the way. But the terrain perhaps decided not to let us enjoy that easy. The way started moving uphill and we had to take short breaks until we reached a temple which is also called Champa Devi.

Then we started the journey through jungle where leeches and bugs became our main challenge. At one point, Nisha dd even screamed and sat swearing that she would not continue. Sojan dai and Sasin so called Hunters (of the jungle)* went difficult and dangerous way. We left them and continued to walk, we then realized that the water had already finished and there were no any places where we could refill. We also found out that there was a whole hill left to be climbed when we thought that we had already reached there (It reminded me of the way from Sinuwa-Chhomrong of ABC trail which was a hill full of stairs). Most of them were saying this will be their last point, we can’t go further, too tired and were losing hopes to go up there. Cracking jokes and entertaining conversion helped us to move ahead. We finally reached our destination Champa Devi at around 11.30 a.m.

“THERE IS NO WIFI IN THE FOREST BUT I PROMISE YOU WILL FIND A BETTER CONNECTION.”

‘Breath taking view’- who ever coined that term must have witnessed the place as such. The ambiance of place was such that it healed all my fatigue and weaving the words could not justify its beauty.

‘Breath taking view’- who ever coined that term must have witnessed the place as such. The ambiance of place was such that it healed all my fatigue and weaving the words could not justify its beauty. Chandragiri hill was the next hill seen from there which is also in same level as Champa Devi. Rajesh dai and Rojesh dai were so happy and running to the temple thinking there was a water tap as everyone was so thirsty. Everyone took rest and worshipped the goddess Champa Devi (Champa Devi mai ki, Everyone JAY)*3 and captured some moments there. We also found a man at the temple, he said he came for grass and also carried knife (khurpa) for cutting branches and for his own safety. He was saying there are leopards in that jungle.

At around 12 we started to walk back to our destination but by another way. There was a map but it was not understandable, we turned on GPS and found that there was a shortcut to way down, but there is a gap in the map, we took the risk and started to walk that way. As the way was too dense we all were together talking, sharing experiences, taking photos, acting like there was a leopard hiding and scaring others. Wow!!! That moment was just amazing. The downhill was so narrow, wet grounds and steep cliff. The greenery turned into wilderness; and everyone grew silent, concentrating on every step they took. Sasin and Nisha dd slipped many times. We were swinging and bending from the branches and plants as the road was too narrow. After a long time going down, everyone was exhausted as there is no sign of road and houses. When we heard the sound of bike many of us were happy. But still there was a long way to go Sasin and Sujes said that will be there last hike. We reached Machegaun and rested there for a while and then went to Kirtipur (around 3.30). When we got the delicious food and cold drinks all the tiredness vanished and we were laughing, gossiping and watching the hills where we went and returned. Everyone was so tired that they were falling asleep while traveling back to home.

Here, I‘m writing the last of the lines for my first blog. Thanks to coordinator Binod dai , without him we would not get chance for this awesome hike. Thanks to Nisha dd, Rajesh dai, Rojesh dai(Photographer), Sicchya dd, Sojan dai(photographer), Sushant dai, Sushma dd, Bikash, Nabindra dai, Sasin and Sujesh for being the part of this wonderful day of my life.

One of the thing that has always fascinated me is how quickly we bond together as group of people, as friends when we travel together. Though the hike to Champa Devi was only for a day, the memories will last for a lifetime.

The day was here, my first squad hike of Deerwalk. I got up really early in the morning since we were expected to be within the Deerwalk complex at 6. Instead of cool morning breeze hitting me, I felt the warmth of the air around me. The morning was hot more than it normally used to be. And at that moment I realized that this hike was going be more exhausting than I initially thought. Nevertheless, it did not waver my enthusiasm and excitement for my first official hike.

The day began when few of the hikers met on the Deerwalk complex at 6. After initial introduction with fellow squad members and little chitchat we soon left the Deerwalk complex to pick up rest of the hikers from their respective stops. After picking up all the hikers, we went on towards our first stop for breakfast. We sat on a local tea and coffee shop and had a basic breakfast consisting of tea, eggs, biscuits and bananas. Then, around 8 our hike towards “Champa Devi” officially began.

We started to ascend the “Champa Devi Hill”. The initial road that leads to the main hills consists of gravelled road which I thought would be pretty cool for mountain biking. We walked on the gravelled road for around an hour and half and were eventually greeted by lush green fields. Above us we could see the Champa Devi Hill and below us lays a breath taking view of “Taudaha” lake. We decided to take a little break to fuel our body and have a quick photography session. Few of the hikers were expressing their regret for not bringing their selfie sticks while other bunch was joking to use a stick and a hairband as a makeshift selfie stick. After a brief break we continued our journey. And around 9 we reached “Sano Champa Devi”.

The scenery quickly began to change after “Sano Champa Devi”. The trees and bushes were thick and dense. Flies begin to fly around our head and leeches were squirming beneath us. Nisha didi in particular seems to have extreme phobia of leeches. Slightest thought of leeches creeping up her leg made her jump. Two of the fellow hikers (Sasin and Sojan Dai aka hunters of the jungle) decided to take a short cut only to find out there are no road ahead and leaving them 45 minutes behind us.

The road becomes more treacherous, endless spirals of ladders and rocks which never seem to end. It began to feel like we were walking for eternity but not reaching our destination.

The road becomes more treacherous, endless spirals of ladders and rocks which never seem to end. It began to feel like we were walking for eternity but not reaching our destination. The hills seem almost unconquerable. But with all our might and strength we decided to push on. After an hour and half we finally reach our destination. “Champa Devi” temple was here. There was a sigh of relief and excitement on everyone’s face after a long exhausting journey. The group decided to take a break and replenish our energy. We met a local man who warned us about the leopards and wild boar in the area. We decided not to go back to the original route we’ve taken but instead take a road that will lead to “Maachhegaun”. Little did we know another set of even more treacherous path was waiting for us.

About half an hour into journey back home we faced a conundrum. The GPS seems to show that there is no road ahead. But instead of heading back we followed our intuition and marched ahead. This eventually proved to be a right decision. The forest becomes even more dense and thick than it was before. It reminded me something that was straight out of “Man Vs Wild” episode. Few of the people decided to play prank on us telling that they saw a tail of a leopard but we can see through their faces that they were lying. The trail was full of slippery mud and moss-covered rocks. We were being extra careful with each of our steps. After an hour hike downwards through the forest, we were greeted by a breath talking view of “Kirtipur”. The view from up here was really amazing but soon the reality dawned on us that there was still a lot of ground to be covered. After about hour and half walk, we finally saw some signs of human settlement. This made us all very relieved and excited. We stopped for a break at local shop as were waiting for other hikers. Soon we all gathered up and boarded a local bus to go the inner Kirtipur area where Deerwalk van was waiting for us.

The exhausting 7 hour hike has come to an end. We decided to treat ourselves with a delicious local Newari cuisine. The famous “Lahana” restaurant was our go to choice. Talks and laughter soon began to follow along with cold drinks and typical Newari delicacies. Looking back I feel really blessed to have these people around me. The memories that we made that day will last a lifetime and bond between us will hopefully last even longer.