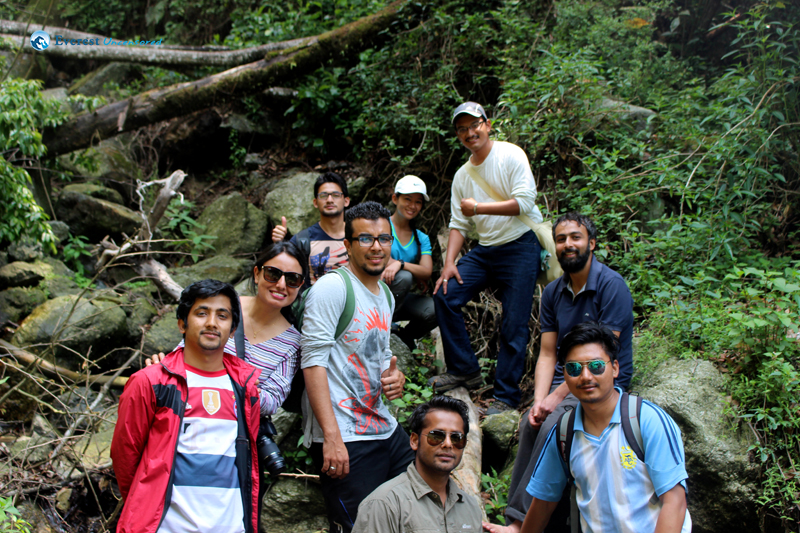 Yes, we were over the hill and far away from the actual road. That was the highest peak we reached. Maybe we could touch the sky or maybe not but the road down under was just so far away.

We began the trek from Okharpauka (Nuwakot), yes it was more of a trek than just a hike. We could see some good views of the hill after just a few minutes of walk. We had a couple of great photographers, Mr.Bishwas Lohani and Ms.Rajni Gautam with their own weapons. So it was fun taking photos now and then. I am also an enthusiast photographer but only of things. Moving ahead, it was just a normal walk until we reached the jungle. We could hear the river flowing and it was a good trail moving along. The eggs we took into our stomach before starting the walk were giving us a good amount of protein and energy and no one looked tired. In a nick of time then, we found spring water which was quite cool. Photographers were making use of their weapons and photogenic were getting into it.

Then moving ahead, we had to follow Satendra’s google map directions because we could not identify the path. In the meantime, I remembered a line from Led Zeppelin’s song “Yes, there are two paths you can go by, but in the long run, there’s still time to change the road you’re on”. And it really made me wonder because there were actually two paths but we thought to follow google map’s direction.

Following the trail later we did not find a proper path and we did not have time to change the road go back and take the path number 2, I mentioned above with the song.

So, all we thought was just to follow Satendra because he was quite far ahead of us. It was tough climbing without a path but dragging ourselves with the help of branches. Plus, a few of us were carrying a water bottle on our hands as well because we did not bring a bag with us. By hook or crook, we reached on the top.

Forgot to tell you that we were heading towards so-called “Tarkeshwor Mahadev”. We thought it would be a real temple, a Hindu temple. But instead, there were just a few stones. We then assumed some trekkers in the past got lost, just as we did and built a Stonehenge.

Forgot to tell you that we were heading towards so-called “Tarkeshwor Mahadev”. We thought it would be a real temple, a Hindu temple. But instead, there were just a few stones. We then assumed some trekkers in the past got lost, just as we did and built a Stonehenge. Without a second thought, we just started eating the snacks we had without keeping in mind that we had a very few quantity of water.

We had set our own path climbing up the hill. We were over the hill and far away from the road below which could be seen. Now we had to get down to the road by any means because we could not wait for any helicopter to come rescue us. Getting down was more tedious than climbing up because of its slipperiness. Some of us fell down, had some cuts as well. We now had to take the support of the long and strong grasses and some branches again. Anyhow, we reached the road but that was not the one that could take us to the base of the hill. This time we did not follow any google map direction. We went down on our own logic and fortunately, we found a house and there was a person as well. He helped us how we could reach our destination downhill. It was one hell of an epic trek I ever had or will have in my entire life.