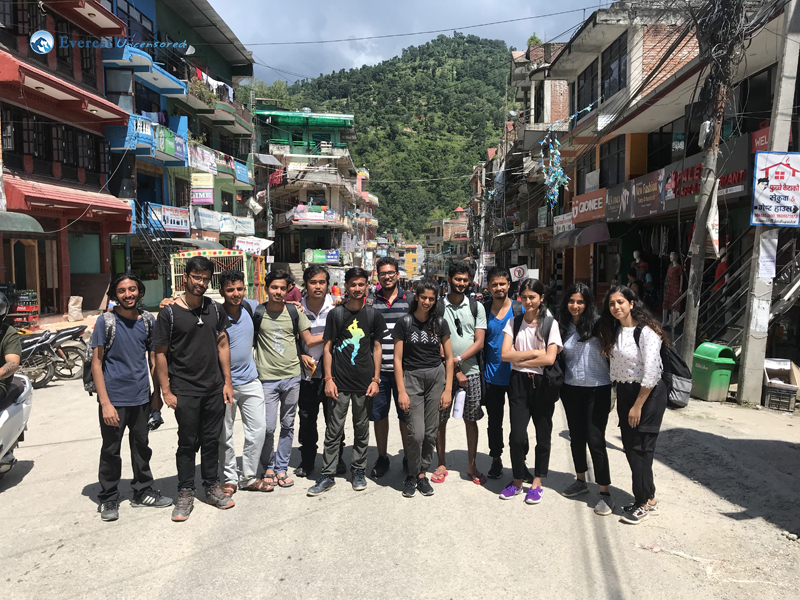 Nishan Pokharel
On 7th September, 2019 Hiking club organized 2 days hike to Helambu. There were total of 16 participants from different batches and we were asked to gather at Deerwalk Complex at 6:45 am.
All the participants arrived around 6:45 am and then we headed to our destination at around 7 am. The route we were taking was through Araniko highway. We all were excited as it was 2days hike for many of us. During the journey through Dhulikhel, we were lucky as we saw such a beautiful view. All our surrounding were covered with fog and it was kind of scary and amazing at the same time. After around one and a half an hour later we reached the place where we planned to have our breakfast. After our breakfast, we were set off to our further journey. Our journey was going smooth till the road start to disappoint us. Sadly the condition of the road was so bad that we were having a difficult time in the bus. We experienced this about1.5 to 2 hours when the luck completely left our side. Around 12:15pm our bus was unable to go forward because of the condition of the road. We then decided to get off the bus and take the local bus. Most of us went by the local bus but unfortunately, 5 members of the group (Aadesh Dhakal, Riwaj Chalise, Ayush Raj Sedhai, Rohan Prasai, and kedar Sedai) were left out because the bus took a different route and they were forced to walk from that place to Melamchi bazar. We arrived there with ease and went to have some food. During that time three members arrived (Ayush Raj Sedhai, Rohan Prasai, and Kedar Sedai) by just walking and other two members were on their way to Melamchi bazar. We had our food and then we waited for the other two members. After around 1 hour they arrived at the shop and had their food. After finishing their food we went towards the fishing spot. The fishing spot was around 3 km far from Melamchi bazar and we went there on our foot. It was a new experience for almost all of us so we all tried fishing but only 2 of the members (Riwaj Chalise and Nischal Rimal) were able to catch the fish. Nischal Rimal was able to catch 2 fish whereas Riwaj Chalise was only able to catch 1 fish and a local person helped us to catch 1 fish (altogether 4 fish). After 1 hour or so we left the place and headed towards the destination (Helambu Eco Resort) on the bus. Around 7 pm we reached there where we changed our clothes, refreshed ourselves and had the food they had prepared for us.
After having food we sat in groups and talked about our day and all the fun stuff. Around 8 pm we planned to go around the area where we saw a kind of waterfall which was really good and the environment was awesome. Just imagine a dark night with the sound of a river flowing. After that, we all return to the resort where we discovered two members (Aadesh Dhakal, Nischal Rimal, and Riwaj Chalise) were preparing the fish that we initially caught. During that time the light went off and all of us turned the flashlight of our mobile phones and helped them. After this, we all gathered in a particular room and played games and had lots of fun. Around 9:15 pm our dinner was prepared and we had our dinner.
After this, we set up bonfire where we barbequed the fish and chicken. The main credit of this must be given to Riwaj Chalise who barbequed the fish and chicken and was too good. It was the best meal we had in that entire day. We sat beside the bonfire and talked until all the fish and chicken was finished. It was around 12:30 am to 1:00 am when all our food was finished. Then we all headed to our room to sleep but everyone was having so fun that we all were unable to sleep.
Initially, our plan was to wake up at 4:00 am and then go to the destination upward the hill but due to the bad weather, we were unable to do that so we slept till 6:00 am and then we changed the plan. We planned to arrive at Melamchi bazar on our foot which is 17 km far from the resort and set off around 7:00 am.
Firstly all of our speed was similar but around 20 to 30 minutes later our entire team was separated into different groups. The first group (Sabin Pathak, Rohan Prasai, Prashant Neupane, and Manish Acharya) were the fastest group and they covered the whole distance on foot around 3 hours which was pretty amazing. The second group (Ashim Garbuja, Anjali Neupane, and Nishan Pokharel) were also fast and they covered the entire distance around three and a half hours. The remaining members arrived at the destination on the bus.
There we ate our lunch which was really good and then we took the bus around 1 pm and then we set off our journey towards Kathmandu. Though we had a quite bad experience like our bus stuck and the food was half cooked and we were unable to go to the destination due to bad weather but as a whole, the hike experience was great and we had lots of fun.

On 7th and 8th September 2019, DWIT hiking club organized a two days hike to Helambu. A total of 16 members were selected and they were asked to gather at Deerwalk Complex at 6:30 am. With full of excitement and energy, we departed from the college premises around 7:00 am.
Playing games and listening to music, we stopped at Khawa, Dhulikhel around 9:30 am to have our breakfast and then we continued our journey. On Sipaghat, Kavre our bus got stuck and couldn’t go forward. Our hike went more adventurous when we decided to travel the rest of our way to Melamchi bazar by local bus. Also, we had such enthusiastic and energetic hikers who decided to walk the way instead of taking the bus. We reached Melamchi bazar around 12:05 pm and had our lunch. We waited for the rest of the hikers to arrive. After that, we started our hike at around 2:00 pm. After one hour of hiking, we reached Simkhet where we enjoyed fishing and also caught 4 fishes. We all tried fishing but only 2 of the members (Riwaz Chalise and Nischal Rimal) were able to catch the fish. Nischal Rimal was able to catch 2 fishes whereas Riwaj Chalise was able to catch 1 fish and finally we got 4 fishes for the barbeque by the help of one local dai.
As the saying “Difficult roads lead to beautiful destinations” the view throughout the hike and especially the view of Melamchi river was mesmerizing. After spending time enjoying fishing, we decided to continue our journey. We traveled the rest of our way by local bus and reached our resort (Helambu Eco Resort) at 6:00 pm. We had a mini lunch after freshening up and had some chit chat about life and fun. Everyone was having fun talking to each other and laughing at each other’s jokes. Then at night around 7:15pm we went for a little walk. Then at the resort, we decided to play cards and enjoy the moment. Our dinner was ready at around 9:30pm. After having dinner, we again started playing games. Then at around 10:50pm we did a fish barbeque. This was the most enjoyable moment as we had music, games, and barbeque. We enjoyed the night out and didn’t even notice how time went so quickly. We enjoyed the entire night and at last went for sleep.
Since we woke up at around 6:30am, we weren’t able to hike further towards the Gumba. So, we went down the resort where the view of the river could be seen. We sat for about 20 minutes there and had our breakfast at the resort. We left the Helambu Eco Resort at 8:40am. This time we decided not to take any bus but rather hike to Melamchi Bazar. But then, we had to take a bus after walking half the way. But, some of the hikers decided to walk. We reached Melamchi bazar and had our lunch. After that, we took a bus to Kathmandu. Passing by several bridges and rivers we reached Kathmandu valley at 5:15pm. We reached the college premises at around 6:30pm and bid goodbye to everyone and went our way home.
To sum up, the trip was full of excitement, adventure and difficulty as well. From starting fresh to ending up traveling on a local bus, everything was perfect. Though difficulty was faced but this was one of the best experiences everyone has ever had.