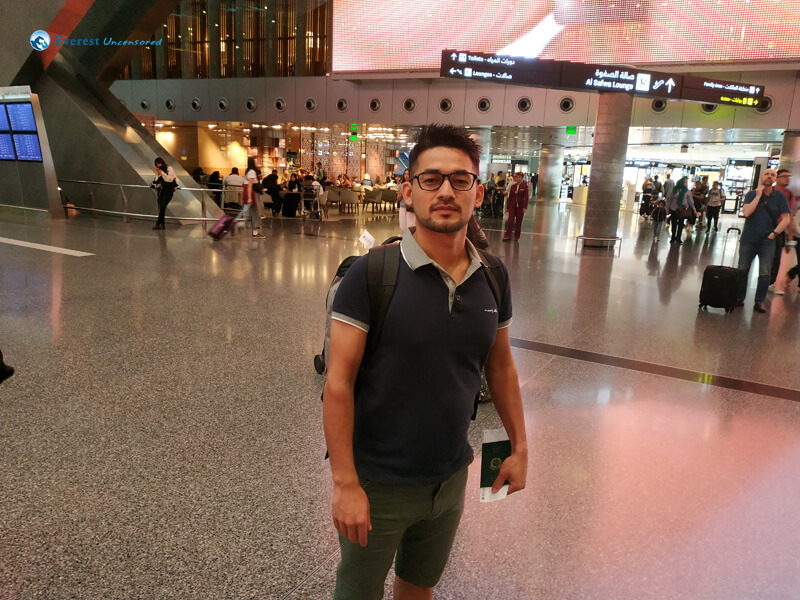 The news of my US visit got me exhilarated from day one. Then began all the procedures to acquire my visa and then the ticket, which took about 15 long days. The thrill of going to the Land of the free was increasing day by day. Thoughts were rushing through my mind as my thought plane needed no ticket, I was already in the land of liberty.

June the 29th, Saturday, the day came when I was required to produce a real ticket. Our flight was scheduled at 11 AM so I had to head towards Tribhuvan International Airport by 8 AM. I met Jeevan dai and Bimal dai who were already there, we three were traveling together. We completed the security check and the boarding process at around half past 9 and we waited at the gate for boarding. Unfortunately, the flight got delayed by an hour. I was traveling by air for the first time, everything was new to me, even this delay. I was going on and on with any random questions that came into my mind to Jeevan dai. Finally, at around a quarter to twelve, we departed for Doha, Qatar.

We landed at Doha at around 4. I was amazed to see the size and ambiance of Qatar airport. We took our boarding passes and strolled around the airport for a while. We had 17 long hours to spare until we could depart for our final destination. We were to be escorted to a hotel by a van, the arrangements were made by the airlines. The van came and soon we were in our hotel. We had a room and dining facility. Also, there was a swimming pool where we enjoyed swimming for more than an hour. It was so hot outside, almost 40-degree Celsius with high humidity. Around 7 PM we had a buffet dinner and went outside to visit the buildings around the hotel area. We went to a bar to have chilled beer. We returned back to the room at around 11 PM and slept since we had to leave the hotel at 5 AM the next morning.

The next day the hotel van took us to the Airport. We looked for our gate where we had to wait for boarding. This time, the plane arrived before an hour of the scheduled time. We were ready for the 14 continuous hours of flight time to Boston.

After those fourteen hours, we reached Boston airport at around 3 PM local time. It was a different world to me, totally different, that I had only seen in movies, the ideal world. We went through some immigration procedures and went to the luggage claim section. After we received the luggage, we took a taxi to Ashay dai’s home. Ramesh dai and Sanjay dai were getting ready for returning back to Nepal. They welcomed us. We had a dinner together. Those heading for home left for the airport. We went to bed as we were very tired.

The next day we were ready for the first day at Deerwalk Boston office. We took an Uber ride to the office. We introduced ourselves to the people there. I knew some of them already but some of them were completely new to me. It’s a different type of office than we have here in Nepal.

First week, there was a holiday for July 4th, Independence day. It was on Thursday. I had planned to take a leave on Friday and spend the weekend in North Carolina with my elder brother, sister-in-law and nephew. I was traveling alone to North Carolina on Thursday. It was 2 hours flight. My brother was waiting at the airport when I landed there. Coincidentally, that day was my nephew’s birthday as well. Lots of Nepalese were gathered for a party at my brother’s house. I also joined the party. I started with a Corona beer. During my stay in North Carolina, I went for the shopping, tried Mexican and Indian buffet lunch and dinner, went to a beach (Kure beach) and did shopping there. I returned back on Monday.

Next week I got a chance to attend a client call along with Jeff and Ed. I also got a chance to attend an amazon workshop on AWS services in Boston. It was a great experience meeting with AWS people and asking the queries directly to them. Working with Ed, Rob, Bri, and sitting next to them was the best experience for me. Visiting different places on weekends with most of the Nepali Deerwalkers was memorable. We were being regularly called for dinner by Nepali Deerwalkers there. We had beer almost every day.

On the final weekend, Sanjeev dai had planned to go to the beach called Salisbury Beach. About 14 of us went there. The first wave that hit me took my glasses away to the Atlantic. Fortunately, I had brought a backup glasses. In the evening we went to Revere Beach, where the International Sand Sculpting Festival was being held.

I was very much excited as I was returning to Nepal during the last week. I was already missing the people here in Nepal. Bimal Dai and I were returning back together.

It was a memorable visit to the US. I tried to explore lots of things like culture, peoples’ lifestyle there. I would like to thank Deerwalk for giving me this opportunity.