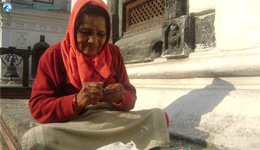 Photo Description:
At this time ppls are to be enjoying their life free from all responsibility with their children and grand children. But they have to stay away from all alone with stranger. Its bitter truth.

Her name is Khopa Sherpali from Bhaktapur as stated by her and been about 10 years here. There are several “Aashram” in Kathmandu Valley and outside. With increasing number of Young migrating abroad their are no one to take care of elderly ppls.

Situated in heart of Pashupati Nath Temple, Holly site for Hindu, “Pashupati Bridashram” have been the Home for about 230 elderly citizens since BS:2034. Formerly known as “Panchadewal Pakshala” was established by King Surendra Bikram Shah on BS.1938.