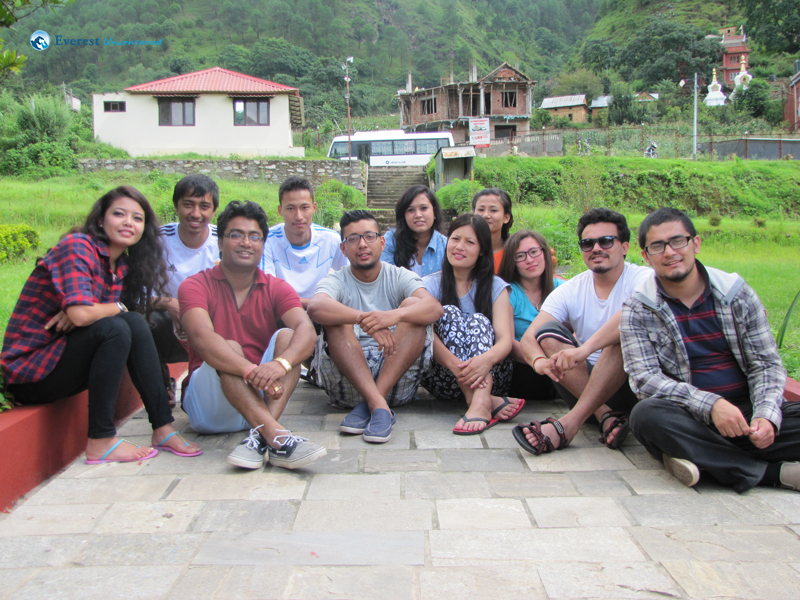 Few trips are such which keep all previous trips behind

Few trips are such which keep all previous trips behind, this was my first outing from Deerwalk which was going to be one of the memorable trip for me. When I heard there was an outing planned, I was overwhelmed with excitement. As gossip surrounded, that played a great role in me. When I got the shared Google sheet with participants and stuff they will be having in the trip, it was so interesting. I didn’t get an opportunity to reply expressing my interest in the sheet, which already arrived to me as “Achyut Kumar Bhattarai-Going-Hard drinks”. It would have taken no time to keep my name and status as going, thanks now who ever had filled my portion.

Some personal reasons were around me to pull my leg and divert me from the trip, but Asmita was the one who changed my mind. As I was familiar with few faces in the office, it’d be a great opportunity to get along and have fun and so my mind was set.

It was Saturday late afternoon, when our team moved toward DVR. Bikram was the one, who made our journey more memorable and fun. After reaching there around an hour of drive, most of our team members wanted to swim and take some rest, so they were provided room and tents. Sagar was busy arranging all stuff related to rooms, snacks and all other. After some refreshment and fun, we joined the table for snacks. Though the hospitality provided by DVR was not as expected, but hunger, Songs from Surya, and the most memorable thing about our outing i.e. dance from Neeraj helped us to forget all those things. After snacks, all were busy in their own circle as some started having drinks and some started corner gossiping. With unlimited fun and late night dinner, time just passed away.
Colourful night began after our dinner some of them started dancing, some started playing cards, some were busy in their own gossip and some were busy in tasting Hukka.

Early morning natural beauty with sunrise spread its hand and welcomed us. Second Day, an unplanned Hiking Day, which was the result of strike called by different political parties. Thanks to them, we had some additional memorable moments together. We enjoyed alot and made our outing memorable. Finally, we returned home with all those wonderful memories which will be with us FOREVER.

Sujan Dongol
Our team (Data QC and App QC) decided to go for an office outing in the New Dakshinkali Village Resort. I was pretty excited as it was my first outing with Deerwalkers.

We planned to start our trip at 12.30 pm on Saturday, 22nd August, 2015 along with a bus and a micro bus. The moment we arrived at 3.15 pm, we met resort’s manager and checked in at the resort. It was beautiful and can be rated as excellent. It is surrounded by the enchanting greenery hills and natural aesthetic beauty. It is Located nearly 12.5 kilometer south west from Balkhu Ring Road and 19 KM from Old bus park (City Central) towards Dakshinkali Temple.

We had some snacks and went for swimming until sunset. The hall, which was booked for us was quite good. We played fun games in the hall and had barbeque with dance party.

Next day morning, we decided to go back at 12.00 pm. Unfortunately, it was strike on that day. So, we planned to go for hiking from resort to Dakshinkali temple. The temple of Goddess Dakshinkali is not more than 3-4km from the resort place. We ate our breakfast and started to play bingo hosted by Sandace. Before leaving the resort, we took some group photos. We started our hike at 12.30 pm. Total time taken for this point was over 1 hour and please avoid going in the morning as every visitor wants to start their day worshipping at the temple, hence there is a big rush. Try to do it in the afternoon or in the evening. So, we visited the temple at 2.30pm without any rush. We had lunch at Pharping, waited for the bus and headed back home. Pretty soon we reached our home. Looking back it was a great experience spending all this time with Deerwalkers.