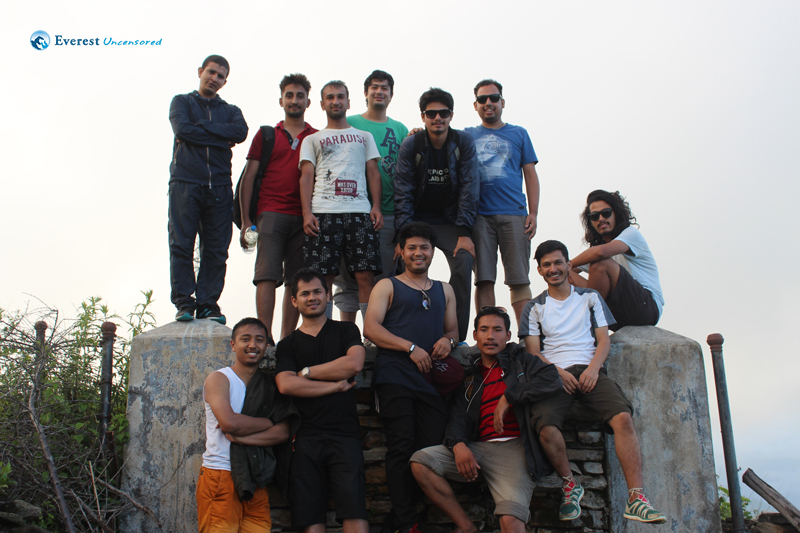 “A distance of 32 kilometers, 4 and half hours of walking and 2,070 meters high”. That is the best way to describe our trek to Ghale Gaun. Considered as one of the easy routes in the Annapurna Region, it takes around 3-4 days to complete the trek. But we had a tight schedule and limited money, so we decided to push ourselves to complete this adventure in 2 days.

Our trip began with a bus ride from Kathmandu to Besisahar at 5 AM early, where we had a delicious lunch and rested for a while before our big trip to Ghale Gaun. Hotel Tulsi OM the starting point of the trek.
We had some sad moment before starting our Hike from besisahar, but at around 1:30 PM we started our journey toward our destination. The trip got more fun and interesting with our never ending questions about the place and time to reach by there to local. The first funny and interesting moment was coke in a mineral water bottle by Krishna dai.

We were 7 hikers in total who are heading toward the destination by foot sorry to say that one of our participant was hospitalized due to some accident. Few of our members decided to go by local vehicle to KapporGaun.

The first one and a half hour was fun and easy with uphill walk. But then came, what seemed like the never ending stone steps.

The first one and a half hour was fun and easy with uphill walk. But then came, what seemed like the never ending stone steps. Walking for a couple of flights of stairs was one thing but to go through it for multiple hours was really, really exhausting. After a and half hour or semi running we reached Bhanjayang and rested for a while, due to heavy fog due to heavy rainfall we didn’t realize the height and scale of that hill through which we are at that top.

It made me wonder if we were too ambitious to think about finishing the trek in some few hours. What motivated us were the spectacular views of green hill range and the helpful locals. Asking with each of the villagers we meet up with always said that the place is near about to reach and u did it. The best part upto there was some fun gossip and some extremely astonishing photo shoots by anil and some pose by suraj.

The middle way of our destination we had some fun there, that place was famous for having snacks by the hikers who used to travel to Ghale Gaun. As same we have some delicious Sukuti and Patanjali Glucose. Similar land structure was followed for more than 1 hour and then we are able to see our destination far from our eye on the top of the hill straight ahead of us. Now we again started our uphill journey through stone stepped road. In that ending hill we have our own scientist Suraj Dai who started to give some scientific name to different trees and bushes.

After walking for 5 and half hours of trails, stone steps and small streams there it was, Ghale Gaun, the finest of the Gurung villages. We were so proud to have made it to this Paradise Land. As being the most popular tourist destination for short treks, finding a home stay was easy. The hotel and bar and restaurant we had have was the home where stayed, with excellent Nepali cuisine, with local Patanjali Glucose all what we needed after the tiresome day.

We were getting restless now, thinking that we are in Ghale Gaun and I don’t have much time to spare. We decided to take a stroll through the village. As we faced quite interesting debate between Raghu dai and Bistadai.

At last, thank you all hikers for making this happen and for wonderful memories for lifetime.

Before going to bed all I was doing was reading about Ghale Gaun and no wonder everything I read had me excited about the journey we were going to embark on. The next day I woke up and joined my colleagues to accompany them on a drive to Besisahar, Lamjung. We reached there at 11 AM which was the exact time we had planned to reach at. We had a delicious lunch and then we started the long walk uphill, the word ‘uphill’ is meant to be taken very seriously because after 10 minutes we felt as if were climbing a ladder and the fact that scared me personally was, this was just the beginning and we had hours to go before reaching our destination. But, there was no point in backing down so we continued and after around 5 hours of walk(or even more for some of the guys) we reached Ghale Gaun. One thing I would like to say is how much ever I may try to explain, I will never be able to express my joy in words.

Although it was very tough and tiresome, no one will be able to experience that feeling if they reach there by riding a vehicle.

Although it was very tough and tiresome, no one will be able to experience that feeling if they reach there by riding a vehicle. During the hike I got the chance to explore the beauty that nature had offered which was not possible if I had reached there easily. The immense joy was because I had spent so much time in the lap of mother nature even though I was physically worn out in that space of time.

Talking about the destination itself, the first thing that amazed me was Ghale Gaun was a ‘Free WiFi Zone’. Although this materialistic entity was nothing in front of the place itself, it does signify that this village was moving forward in terms of providing privileges for the people living there. Also, the accommodation for tourist had been planned in such a way that the money from the guests would be divided equally to all the villagers, as there were no hotels there and the only option was Home Stay. We were divided in 3 groups of 4 people and each group were given a separate house. We then started the customary drinking and enjoyed the company of each other in a surrounding which were craving for from the day we had planned the trip. After that we had dinner and it didn’t take us much time to fall asleep as we were so tired. The next day some of us decided to wake up early and enjoy the majestic view of the mountains and clicked some pictures there. After all the fun the time came to say goodbye to Ghale Gaun and come back to the same old life with all hustle and bustle. Having said that we came back with an experience we could never forget and memories we will cherish forever. I personally know that I will surely be heading back to Ghale Gaun sometime in the future as well.