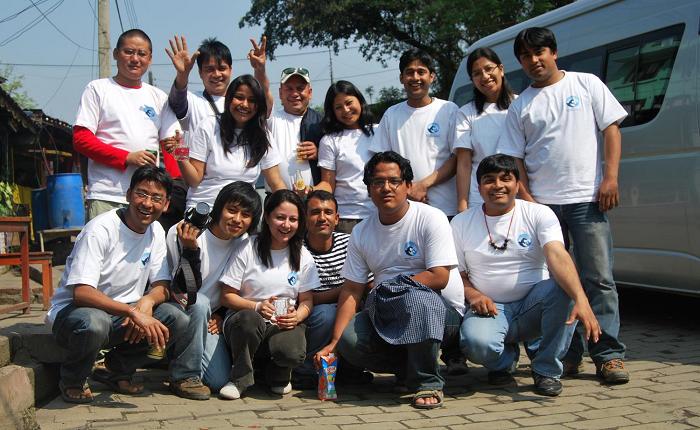 THE JOURNEY-DAY 1 : Mamata’s Recollection
After a lot of discussion, EU team selected Pokhara as the hiking destination . As we were setting off for distant hiking everyone was requested to be at 6:30 at office premises, but till 7 only five members had arrived and then the constant “call” session went on punctuated by phrases like ” Keshav where are you ??”” Nischal when are you arriving?? “Dijup you are coming at office or have to pick up on the way??”

By the time all those who were supposed to arrive at office did so it was already 7:30am.After seeing all , Dhilung, the EU co-ordinator, distributed the EU t-shirts to all the members and then we left for the destination. On the way other team members were picked up. Singing and imitating some of our colleagues, we reached Naubise and had breakfast there. Hoping for having expected breakfast entered a “pasal” popular for “Khasi ko Masu “but it did not meet our expectation and we went to another shop. After breakfast started team photo session and then moved ahead. On the way we stopped at Marsyangdi hydropower canteen and had tea break and then again continued moving .

After entering Kaski district we moved about asking the way to single view point of Beganas and Rupa Taal to the local people. It was there that nature was at its best. We were at the middle , on the left Beganas was opening its arm and on the right Rupa calling us . Truly speaking, it was ahypnotic view , after having few shots there we came down for boating, hired some boats and enjoyed one hour boating at Beganas with the panoramic surrounding and then had snack break and then moved for Fewa lakeside.

After reaching the Pokhara our first job was to search for a good hotel which could be covered by our budget and guess what after an hour of search and bargain we checked in and all of us seemed quite puffed up with hotel site and view.

All of us were reanimated after a long drive and then some of us decided to have short walk and rest decided to enjoy the evening by themselves. We, who were going for short walk were asked to be at Thakali Kitchen by 8 pm. After roaming for a while, with Keshav’s lead we tried to reach Thakali Kitchen which was supposed to be 15 minutes way but got elongated as we followed the wrong trail . After the “lost” episode, asking local people, we finally met rest of our team members who were waiting in Thakali Kitchen. But exhaustion of walk was flushed by the real Thakali taste.

DINNER-DAY 2: Brija’s Recollection
After a long drive, an extended evening walk and finally dinner, the day ended with one last event- live music. Dancing in the few head banging music proved a nice way to stretch and be relaxed. The night life in Pokhara somehow reminded us of the one in Thamel area in Kathmandu. Nevertheless, the “Pokharian” ambience was definitely present in the air. After the live music session, we reached our hotel at around mid night. With the anticipation of a bright sunny day tomorrow and lots of “to-go-to” places in our plans, the day finally came to an end with a good night’s sleep.

The next day began for most of us at around 6:30 AM. The day was totally graced with a beautiful and clear weather. We got ready and headed on towards Sarangkot by van. Sarangkot is particularly popular for sunrise, a magnificent view of Pokhara Valley and also a wide range of Annapurna, Machapuchre and Dhaulagiri mountains. In recent years, it has also become famous as a paragliding site. While moving through the van, with every turn up the hill, the WOW!! expression on our faces kept on increasing. It took around an hour drive to reach at the site. Reaching the top, we got a real treat for our eyes. A breath taking panoramic Mountain View accompanied by layers of green hills, peaceful Fewa Lake on the south and a bird’s eye view of Pokhara City spoke of the speechless beauty. “Thank you Pokhara !!!” for welcoming us so warmly.

Far at a distance, a small white stupa – ‘The Peace Pagoda’ could also be spotted which was to be our hiking destination. After a cup of tea with a cool fresh mountain air and snapshots of the snow white mountain in our mind, we began our decent.

On the way back to hotel, we went to the Bindhyabasini Temple-on of Pokhara’s popular temples which is located near the Old Bazaar of Pokhara. It has great religious value for the Hindus living around the valley. The temple is dedicated to Hindu goddess Durga. The fragrance of ‘Dhup’ and sounds of bell created a divine atmosphere around the temple.

We then checked out from the hotel, and had breakfast at ‘Be Happy Restaurant’ before commencing our hike. Breakfast was filled with jokes, caricatures and guffaw.

DAY2- HIKING: Ashay’s Recollection
Crossing the lake was not supposed to be as exciting as it was! We set off across the Phewa Lake and Sumit ‘s “Fear of Drowning” escalated every time the boat moved! He held the boat so tight, it was a revelation that the boat held under the strain. If you missed his forlorn expression, well you missed one of the most entertaining moments of the trip.

Thence started the hike. We climbed up to the World Peace Stupa. Through the trails, we met up with people coming down. Never once came across anyone going the same way we were. We hiked for some time and had breaks every once in a while! I would have volunteered to have had another hiker to have walked in my stead; but darn suspicious people. No one was as gullible as I thought. As we walked, we met several foreigners. We discussed EU with them and asked them to visit the site. They were pretty supportive of the idea and said they would visit the site. That way, we kept climbing. Near the top, Dijup carried Shamesh on his back, all the way to the top. The view from the top was great. We clicked some photographs and then clicked some more.

It was after this that we the most excitement in the hike. One group got lost. Yeah, I know, again! We met up somewhere on the trail so not that it was devastating on impressionable minds, but you know, it was nice not to break the “getting lost” tradition.
To say that the view was mesmerizing would be a gross understatement. Photographs never do justice to the landscape that nature is, but I miss the fact that we will only remember the place and not live there. It was a great way to end the trip.

DIJUP’S RECOLLECTION
As always this trip was very refreshing with lots of fun. As we planned this time we were ready for the promotion of EU in Pokhara where we distributed many flyers and talked to different people regarding our website.They were very happy to know about our website and it objective.

Solveig was one of the ladies talked to.She was in a week visit to Nepal with two of her sons.We met her at Sarangkot. She was very happy to hear about our website and the objective of the site. She told us that she was portrait photographer for Germany currently residing in Japan. After having talked to us for sometime, she was ready to change her mind and do some landscape photography of Annapurna Range, which was very clear and white We shared the website link and left her for our hiking destination-“Shanti Stupa”.

33 thoughts on “Hiking from Phewa Lake to Peace Pagoda”