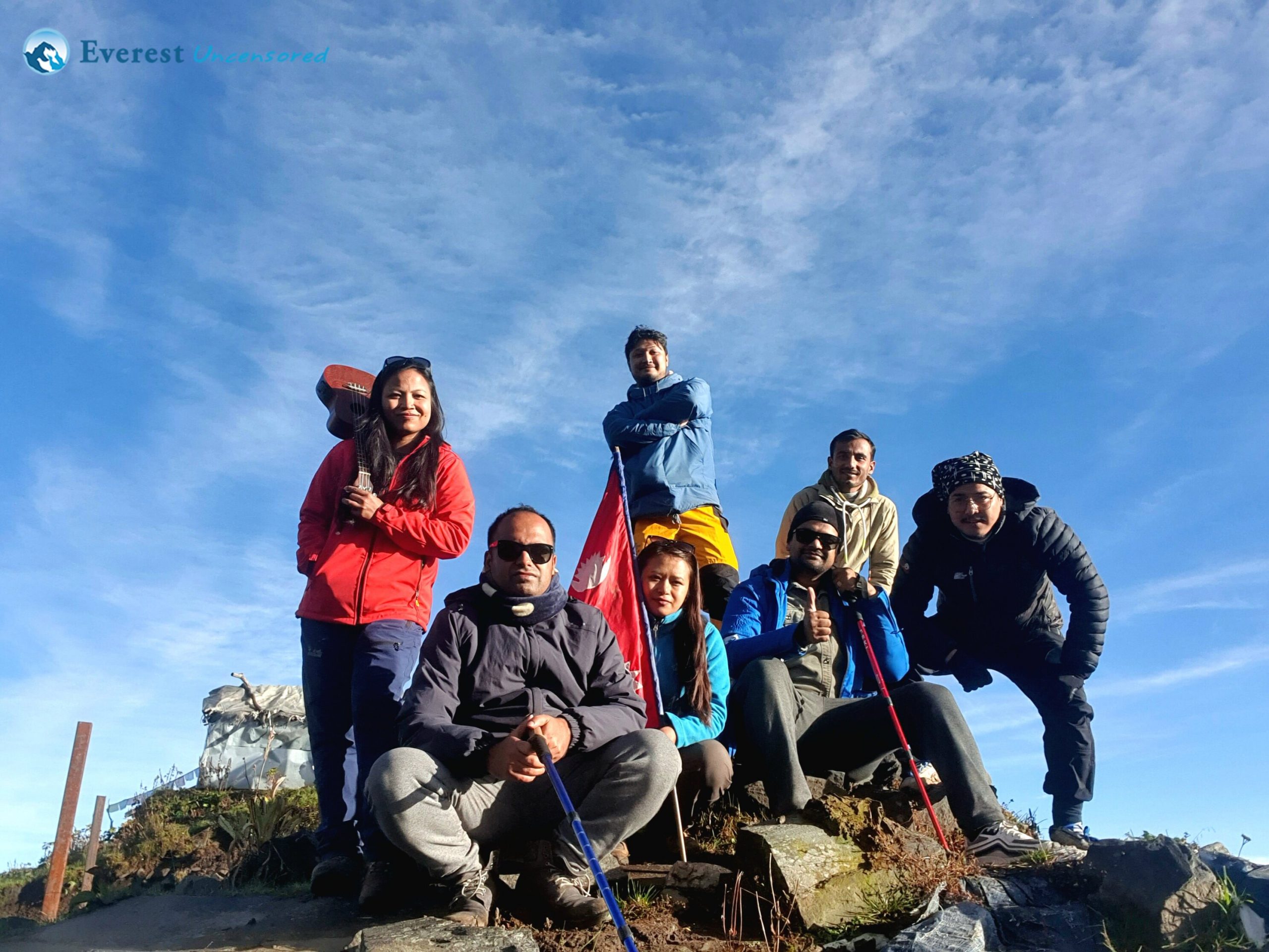 On 30th September (Friday), Deerwalk Sifal School organized a five days trek to Mardi Viewpoint which lies in Annapurna region that offers breathtaking views of the Himalayan mountain ranges. There were 10 people but due to sudden illness, 3 people couldn’t carry on with the trek. We gathered around 6:00 p.m. at Deerwalk School. At 7:00 p.m., we got in the van and we traveled towards pokhara. Due to high traffic and landslides on the way, it took us around fifteen hours to arrive at Pokhara.

On 1st October (Saturday), we immediately started our trek to Lumre Village. We then took a hired pickup truck because the roads were too rough and bumpy for commercial cars to travel on. The truck couldn’t continue past the settlement of Kalimati, so we opted to stop there and begin our walk on foot. Then, as we made our way uphill through villages, we had to travel along stairways up until the point where we sat down for lunch. After arriving in Sidhing, I encountered a slight issue—the sole of my trekking shoes had ripped off from prior trips’ extensive walking. We were fortunate enough to come across two hikers with CA glue which fixed my issue. Their shoes also had a similar issue, which was typical during trekking. Then we departed for Low camp after lunch.

We then traveled to Low camp for around five hours. We had to navigate wet ground and an army of Leeches that was prepared to jump and stick to the Trekkers. We strolled through the extremely soggy forest from 1:30 p.m. till almost 6:00 p.m. To guide us, we needed to use torches and Headlamps. By the time we arrived at Low camp, we were exhausted, but as we cast our eyes into the distance, we were welcomed by a spectacular panorama of Machhapuchhre Mountain. After arriving at the hotel, we sang songs by the fire. We had a Ukulele to accompany us through the trip. I played the instrument while others sang songs. In fact when we all sang it sounded really harmonious. We found out one of our team members (Sunita Maharjan) had a birthday on that day, we asked hotel chefs to make something special and they actually made an awesome cake. They prepared a delicious cake. After the celebration we had dinner which was very tasty. Low camp was the place where we actually had a first good rest since the day we started the trek.

On 2nd October (Sunday), we woke up before daybreak and immediately began capturing pictures and time-lapse videos. After a delicious breakfast,we were served Tibetain Roti , Omlet , Fried Potatoes and Hot Beverages. We encountered lots of trekkers going up and also heading down as they were returning, we could see the transportation that villagers use to transport foods, and they were Span of mules that carried needed supplies for the villagers. This was one of the reasons for the price hike of most of the things but some things mules couldn’t carry were the job of porter to carry on their backs.

The trail was as muddy as usual, but from this point on, we happened to be walking on mists. Along the way, we encountered many Trekkers, and then we arrived at the settlement of Badal Dada.

This region is frequently shrouded in mist, so we regrouped once again next to a huge rock where we sang lots of songs and had a little rest. We stayed quite a while there singing songs and snapping pictures. Other trekkers who were passing by also enjoyed our songs. Drop of rain started to fall down so we continued our walk and headed towards Highcamp. It poured heavily on the hike to High camp. Due to the pace of walk, we mistakenly split into two groups and we took separate ways upto Highcamp. One group took a muddy road whereas another group took a rocky uphill. We regrouped at a hotel named Trekkers Paradise Hotel which was a branch of the previous hotel we stayed at. We were welcomed by hot tea as well as complimentary popcorn. Here we sang lots of songs while we were warming up by the fire stove.Other Trekkers also sang along with us. We even sang Resham firiri and Deusi re. This is the place where we sang the song called “Let’s Rock Mayalu.” In fact Mr.Ujjwal Poudel and Mr.Nirmal Kumar Paudel improvised the song with their own lyrics which made this song so memorable.After this song the name of our trek group was born “Let’s Rock”. After the rain stopped, the sky was clear. At sunset we could see the mountain range with an orange glow of sunset. The view was breathtaking and we were excited to see a mesmerizing view from the Viewpoint in the morning. We spent the night in High camp because we had to leave for the Viewpoint at 4 a.m. the next morning in order to experience the sunrise.

On 3rd October (Monday), at around 3:00 a.m. in the morning, we got up to go to the Viewpoint. After getting dressed, we left the majority of our belongings at the High camp hotel so we could pick them up later. We just took a few things, including water and medication.I actually brought a big Nepal Flag to snap pictures with the group but in hurry i sadly forgot to take it to the viewpoint. We consumed garlic as a preventative measure against high altitude sickness throughout the trip. This was suggested by many trekkers.

We walked before dawn. It was pitch dark so we took out our torches and headed out. The path was damp and moist. At one point we got confused about the way due to the mountain goats.  It took us almost 2 hours to reach Viewpoint, it was a steep climb. In the end, we were not lucky enough to gaze at the sunrise view because the view got blocked by the mountain.

After arriving at the viewpoint, we were able to observe many peaks, including Annapurna South, Himchuli, Gangapurna, Macchapucchre, and Mardi. We took photographs and had tea. Luckily the teashop has Flag so we actually got to take pictures with it. Before returning to Highcamp, where we had breakfast, gathered our belongings, and prepared to descend.

We proceeded via Highcamp to Badal Dada, Lowcamp, Forestcamp to Musalbari, where we had dinner and spent the night. The descent was quite straightforward but included a lot of trekking and leeches. The walk towards uphill was far easier compared to the downhill but it was way faster yet painful.

On 4th October (Tuesday) , We shot a few photographs of the view from Musalbari when we first got up at six in the morning. We could see all the Mountain Ranges and ViewPoint from this place.  After eating breakfast and gathering our belongings, we headed downhill into Dhampush, passing Deurali, Lovely Dada. We rented a pickup truck from Dhampus. On our way, we met an Iranian Group. One of their members was sick so we took her in our truck and dropped her off to her destination which was on our way.  We were then dropped off at the Thakali restaurant close to the airport. Airport Thakali was Delicious and wonderful after five days of trekking, we even forgot about the pain for a moment.  We took some rest and afterwards, we rode a bus to Kathmandu that picked us up outside of Thakali.

I really enjoyed this trip, from all the problems we faced and all the fun we had. From the sunny sun that shines to the hills and mountains to the darkest forest where we had to shine light to find the path, from the warm tea we drank to the dew drop from the leaves, the songs we sang, Birthday celebration, all the funny moments we had I will forever cherish it in my heart. Thankyou for making this trip happen. Let’s Rock.