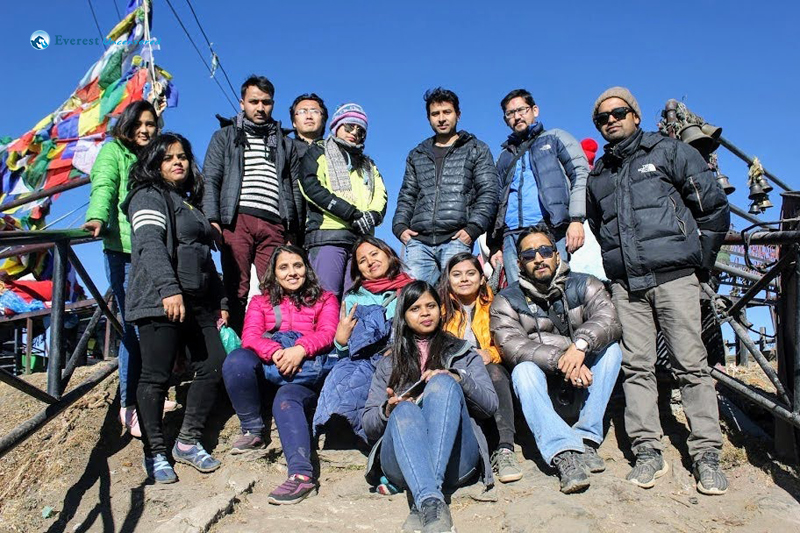 Ankit Verma
Within the few days of my consolidation to Deerwalk Sifal School, I was very much lucky to join the trip to Kalinchowk. I was pretty excited when I had come to know about the trip. It had been a great opportunity for me to join this trip as it was my chance to know the Deerwalk personnels.

On December 23rd at nearly 8 AM, we departed for Kalinchowk. Some teachers Ms. Nemjala Bajracharya, Ms. Hama Rajbhandari, Ms. Aishworya Maharjan, Mr. Robin Dangol and I were picked up on the way, at Baneshwor and Koteshwor. The journey to Kalinchowk had finally begun. The cold and frosty weather in the morning was beautiful and mesmerizing. The view was awesome and the roads were pretty winding. After a couple of hours of ride we reached to Manthali where we stopped for lunch. The lunch was good. On our ride to Charikot by the side of Tamakoshi river, the weather was still cold but the sun tickled us with warm experience. Our Suman brother started the music on bus and many of our teachers including Ms. Hama Rajbhandari, Mr. Pukar Dhital and Ms. Aishworya Maharjan started to dance in the rhythm. I also enjoyed a lot with but I was really not a good dancer so clapping was best for me. The long bus trip became a glimpse in a matter of time. I really enjoyed the views and I am sure others did as well.

At nearly 5 PM, we reached Charikot. The wind was getting colder and it was getting darker. We stayed at Hotel Deurali. There we freshened ourselves from the long bus trip and had snacks. The snack was quite tasty. Then we set off for Charikot Temple commonly known as ‘Dolakha Bhimsen’. It was nearly 6:30 PM, when we reached the temple. The bus trip was short and we walked a little to reach the temple. Everybody prayed and we had a group photo taken outside the temple. From there, we returned back to our Hotel and by then it was time for a bonfire with chicken barbeque. We all gathered around the fire and had fun. Our Vice Principal Mr. Narendra Maden took the guitar and started the songs. In the rhythmic tune, our teachers started to dance and the cold night turned to be the wonderful memory and of course the BBQ and ‘poleko aalu’, which we enjoyed well. It was getting late so we all had dinner and went to bed at around 10 PM as we had to head Kalinchowk, early in the very next morning.

The next morning, we all woke up at nearly 4:30 AM. The vehicle to travel to Kalinchowk was to arrive at 5:15 AM and it was on time. We all prepared ourselves with warm clothes as it was really cold in the morning. We called up two Boleros. The cozy seats inside the jeeps were limited and those who got up first they got the seats and five of us; Mr. Pukar Dhital, Mr. Kuldeep Kumar Gupta, Mr. Mingmar Tamang, Mr. Uttam Upreti and I had to manage at the back of the Bolero with nothing but a thin fabric underneath us. It was quite a feel to experience the coldness. The wind was too cold and we were at the back with open top but we had just got a ‘paal’ to sit on. But it was our luck that Mr. Kuldeep Gupta had brought a blanket so we all shared it to comfort ourselves. At around 5:30 AM we set off for Kalinchowk. It was still like midnight. The moon was smiling with shiny white light. On the way to Kalinchowk, we had a chance to view the sunrise and it was one of the best views of my life till date. It was just WOW!

Nearly at 7:30 AM, we reached the Kuri village. The wind was like a frostbite. The scenery was just unspeakably amazing. There were no words to describe the beauty. After reaching there, Ms. Hama Rajbhandari, who was not feeling well took the cable car and Mr. Robin Dangol and Mr. Suman Manandhar accompanied her. The rest including me chose to hike. By the time we reached the top, we were all sweating. When everybody reached the top of the Kalinchowk hill, we all prayed to Kalinchowk Bhagwati and we also clicked photos there along with a group photo. We spent quality time in the temple. We all bought some Chhurpis to take home while we were descending down. After coming back to Kuri Village, we had our brunch.

The way back home was little tiring as we had had quite a busied schedule. Everybody was feeling lazy and sleepy due to tiredness. After a long ride we stopped at Manthali for our rather delayed lunch. Our Suman brother dropped us back before the estimated time. It was 9:30 PM, when we reached Koteshwor. The bus dropped everybody to the very nearest possible stop and dropped the remaining at School. Overall, the trip really was a memorable one.