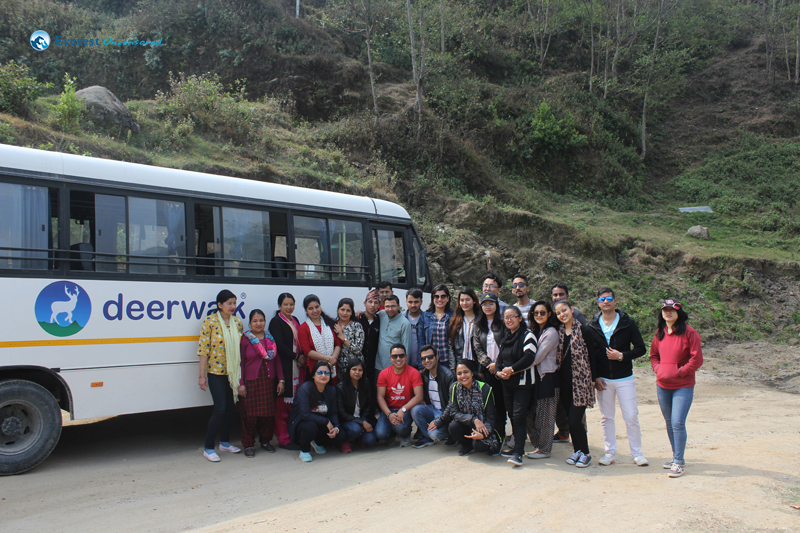 Aishworya Maharjan
A day long tour was all we needed to re-energize all of us. So, we planned a night out on 30th March, 2019 at Heaven Hill Resort, Lapsiphedi. It was only an hour long away from hustle and bustle of city. All of us gathered at school at 3:30 PM. We got on the bus. All of us were super excited. On the way, we were enjoying, dancing, singing, and cracking jokes and chit chatting. An hour long trip turned out to be a little longer than expected as we were stuck in traffic for pretty long time. However, we were having so much fun between that periods that we didn’t even realize that we were actually stuck in traffic neither felt the bumpy and winding roads. We reached to our destination at 5:30 PM. The breathtaking scenes of hills and foggy weather boosted all of our moods. We were so much excited that instead of checking in the hotel we were busy in amusing ourselves, climbing the hill located side of the hotel, laughing and having fun extremely overloaded.

After a while, we all got down the hill and checked in to our rooms. We freshened up ourselves and gathered downstairs at around 6:30 PM. The environment was all set with music and campfire. Sameeta Shrestha, Tribhuvan Bhandari, Pukar Dhital, Tej Kafle and I were already with the rhythm of music and warm campfire. We were offered with vegetable soups as starter and later on, we were all served with snacks and drinks. We were all dancing and singing endlessly. At around 9:30 PM, the dinner was ready. We all sat together, enjoyed the dinner and went to sleep.

The next morning we all woke up nearly at 6 and freshened ourselves. The weather around us was cool and a bit foggy. The gleaming cold air was just very refreshing. After that we all assembled in the lobby, had lemon tea and got ourselves ready for the hiking. Mr. Tribhuwan was pretty excited and seemed quite knowledgeable in such stuffs. One the hotel manager agreed to mentor this trip.

We started the hike around 7 AM. The hiking was pretty tiring as the stairs leading up the hills were sharp, unshaped and huge. On the way up the hill, we clicked some photos in group; some clicked it taking the Rhododendron in their hands. As a whole it seemed everybody seemed to enjoy the hike and of course taking some photos. After 40 minutes the hike finally came to an end. Most the members were tired and sweating. Then, we all came back to the resort. The breakfast was ready and after the long hike it was also time for some breakfast.

We were playing and taking snaps after breakfast. At 10:00 AM we planned to visit Mini Tea Farm which was just a few miles from the hotel. Suman brother guided us half the way from the bus. We clicked some more photos after getting off the bus and then started climbing up to the hill. Few of us climbed the hill a little early so, in that interval of time we again got some more time to take some memorable photos. After we reached the Tea farm we came to know that it was no longer accessible to the visitors. Thus, we rested for a while in the hill and slowly headed towards the bus again. At 12:15 PM we departed to Kathmandu. We reached school at 1:30 PM and headed towards home.