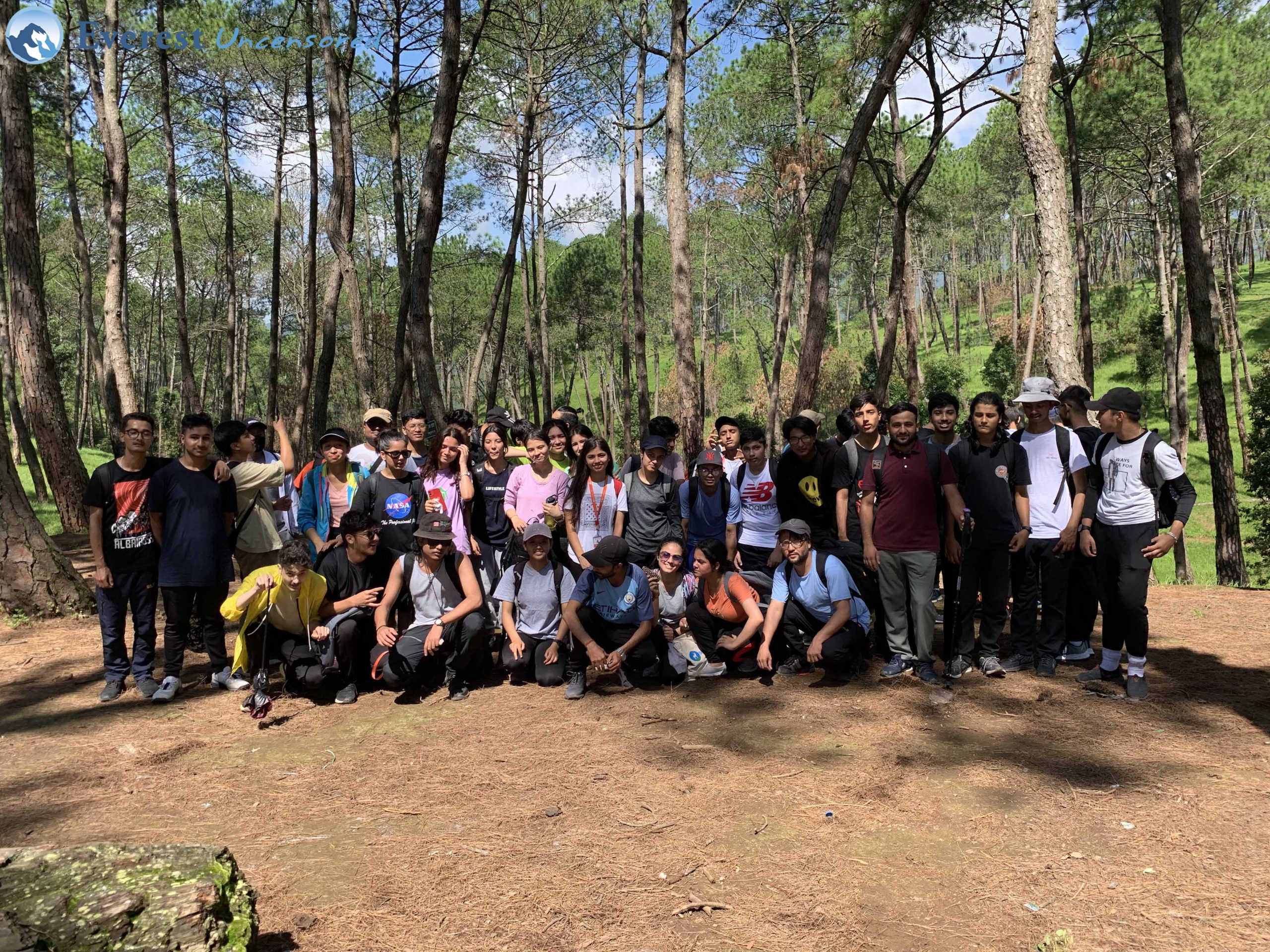 “To travel is to undergo a journey within yourself.”

The hike we went on the 26th of Ashar 2079, resonated with this quote. Traveling has the same aspects as a journey in life, also in general. There are the slides and slopes, the ups and down, while through the moment you are the observer, enjoying and struggling at the same time. This was no less than just that.

We arrived at the college at around 7 am in the early morning. We filled our bottles, greeted our colleagues and teachers and got ready. It looked like everyone was ready and everyone had joy and excitement in their faces when we met initially. Made me think this was going to be something special and a thing to remember in the future.

We got late regarding the departure, as we were looking to leave at around 7:45, but it was delayed to 8 AM. You could guess what happened next, if you have been with youngsters who were hyperactive to start the journey. The environment was bustling and very energetic when we were on the bus. Little did the guys know that this hike would leach every bit of the rowdy energy they had in the first half alone. The ride did take us about an hour, taking us to the pharphing area. To be honest, I was guessing that the ride would take a lot longer than it did. This ride was a lot enjoyable yet short. Short yet sweet, you could say.

Then, came the time to start moving on foot. We started from pharphing. The road was challenging right from the get go. We had to really engage ourselves in the initial phase as we ascended through the elevated hills, enjoying the scenes. Aalas, we got to the top. At this point we were near the Hattiban himalayan resort, and I thought that this was the place which we would stay in, and some people were even thinking that this was the end of the hike. Looking back, how naive they were. This was the mere start of the trip we were undertaking. There was a lot of ground to cover, and I don’t think anyone who was new to the trail was aware of the ups and downs, and the slippery slopes we would inevitably find ourselves in. The quote said above was the thing I remembered here, and I found it lingering in my mind more and more as we got through. With all that out of the way, we packed our bags, emptied our water bottles and poured salt all over our legs. The salt was poured to stop the pesky leeches that we would run into.

The majestic thing was the mossy smell, the dead grass cracking as you walked the trail and the occasional slips that you would encounter throughout the journey. The sounds of the crickets chirping, birds singing, and the green trees  clattering was peaceful, soothing and comforting. I can’t even describe in words how good the view was. Most of us were from the valley, who have lived listening to the ominous noise of vehicle horns and breathing air filled with dust and rubble. Getting to experience nature in its full glory was something we seldom had the opportunity for.

Leeches tried to suck the determination from most of the participants, but their perseverance proved to be too hard to break and they found themselves victorious,  unhinged from the wrath of the blood sucking beasts. Ok, that was an over exaggerated representation, but in essence, that’s actually what happened. The road was filled with leeches, ready to suck every ounce of blood. I was thinking of wearing bulky socks to combat these, but little did I know, these things cared nothing of the socks. Salt was by far the best deterrent. I was fortunate enough that no leech  harmed me, but there were a lot others that were not as lucky as me. I was surprised by how easily these things could glue themselves to people and how you don’t even notice something sucking the blood out of your own skin.

While we were scaling the hill, we came to a place with a small hut-like shop. Thinking about how long you had to journey to get there, we were amazed by how the shopkeepers were able to set up their shop in such an area. Their shop had water, which everyone was craving, but they also had cucumber and watermelon, which were delicious and essential for us at the time.

To be completely honest, the ending was very anti-climatic. People had literally scaled enormous hills and battled horrendous beasts, but then were presented with a view of absolutely nothing but a small resting place and some small statues. That was disappointing to some extent, but I’m not complaining. I was there for the journey and not really the reward. Maybe if we knew the historical and religious importance, it would mean a lot but I would doubt anyone knew those. Nevertheless, we rested for a while there before we headed down. There, we enjoyed the snacks we brought, the bread, and the chocolates.

And then, our descent started. This was the same thing with the ascent, but was a bit more tiring and took more determination. Being the thrill seekers and daredevils we were, we went through the “thrilling” road, which was littered with leeches, and slippery as butter. I again thought the trail was over. Again. How naive I was. Little did I know, we were on our way to another destination, which was the naag taal, located in chobar. Now this location was not as anti-climatic, there was some consolidation, at last.

We ate our meal at a beautiful thakali restaurant, and headed to school from where we departed to our destinations. A huge day ended with a delicious meal and a nice goodbye.