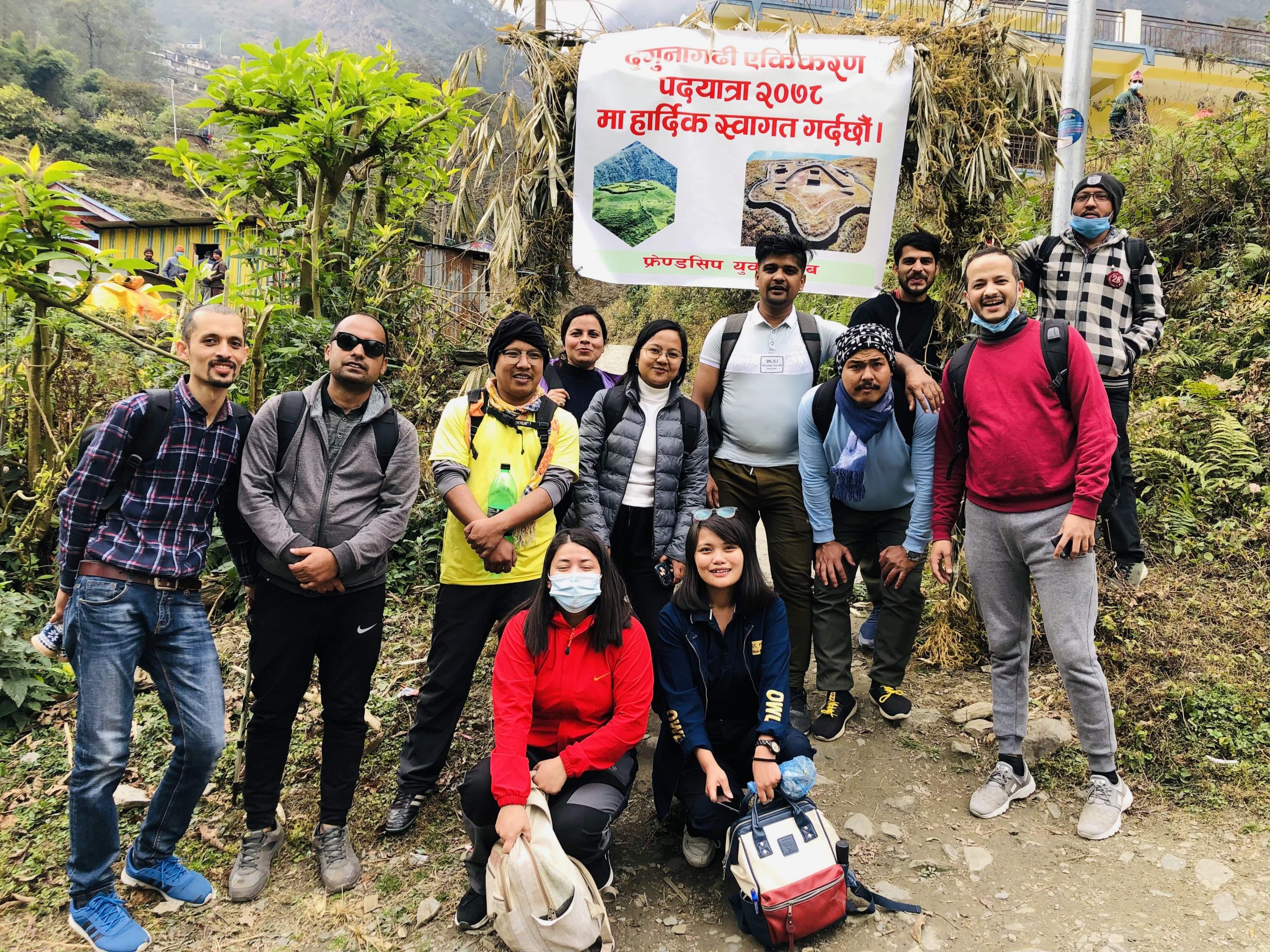 It was a chilly Sunday morning. We the hikers for the day reported in the Deerwalk school premises at 6:50 am. We had decided to hike to Duguna Gadhi also known as Yarmasing Fort which lies towards the northern part of Nepal – near Tibet border. It’s a beautiful Himalayan region in Sindhupalchowk District that selflessly gives us a breathtaking view. Honestly, this hike has been one of the most meaningful hikes ever in my life.

After breakfast in the school, with happy tummies, we departed at 7:30 am towards our destination. We travelled in the school vehicle. It indeed was a great drive with 13 other colleagues. As we proceeded further, we were gradually leaving Kathmandu valley. We crossed many exotic places, we travelled alongside beautiful rivers like Indravati. Just when the winter sun had started to drop upon small streams and big rivers. As we went on, water lines on the sides of rivers sometimes looked curvy and sometimes all straight.

We had already been travelling in the vehicle for around two hours. We reached Dolalghat exactly at 9:30 am only to find out the name Yarmasing Fort we had been talking about for the last two and half hours was not familiar to the people in Dolalghat. We had to get the right way and the location we wanted to hike from. Later, after a little longer conversation with the local public and police there, we found out the fort is known to them by the name Duguna Gadhi. We further travelled for a few more kilometres along the Araniko Highway. This highway connects to the northern neighbouring country China. We reached Naya pool, Gathi, which is famous for Bungee Jump in Nepal. We paved our way by foot as our vehicle couldn’t proceed further due to the road condition there. As we were briskly walking towards Tatopani Vansar, we were overjoyed to be accompanied by the Bhotekoshi River. We also witnessed beehives of Cliff bees, famously known as ‘Bhir Mauri’, settled at the edge of the cliffs above the Bhotekoshi river. It looked weirdly peaceful. After a while, a local vehicle gave us a lift to Tatopani Vansar. We reached there by crossing different places like Listikot, Daklang, etc. There was no question of not taking pictures there in the pool, well quite an important pool for a reason.

We sipped tea in a regular tea stall that was located around Tatopani Vansar and made our journey towards our destination Duguna Gadhi. We started our hike exactly at noon geared up with Nepali food like ‘gundruk and makai-bhatmas’, water and most importantly the excitement that had to last until we reached the peak. We had to climb up the stairs that were quite stiff and we kept walking, crossing along small streams, forests and less populated villages. We met friendly people there who greeted us with warm smiles and pure gestures of love. Climbing tough uphill was a realization of how hard it is to survive in the Himalayan region with no access to good transportation and health facilities. Could you imagine going to the market for necessary stuff that almost takes a day? Well, on the bright side they looked self-sufficient with vegetables and grains on their fields, cattle and other domestic animals that had served them as their livelihood. We kept walking, talking and enjoying the view. We observed the livelihood of people, the dresses they wore, languages they spoke, the tone of Nepali language they had, it absolutely was beautiful. They had their world, the least cared about the world that was behind the tall mountains. They didn’t have to worry about the virus that we were fighting against.

We arrived in the village of Yarmasing. It had more houses than the villages we had crossed by. Most people there initiated conversations with “Aaja ettai basnay ho?. We sadly had to reply as No. A villager who kept talking to us from his patio said the name Yarmasing meant ‘Timut Pepper’ in Sherpa language that is famously used in Nepali dishes. As we kept pushing ourselves forward, we could now see a beautiful stretched land that was all wide and long. We reached our destination, Duguna Gadhi at 2:15 pm. Well, all the tough climb to this place was worth the view. The ancient fort that collapsed after the earthquake of 2015 was reconstructed and looked still. The fort is said to be built by Jung Bahadur Rana between 1855-1856 to defend against the Tibetan attacks. From the fort, we could see the view of the famous market ‘Khasa Bazar’ and the hills of neighbouring country China.

It was quite cold up there. We ate our food, we all enjoyed the view and the places around the fort. Some of our hikers even played football with the local children and workers there. We left our destination at around 4 pm. We decided to visit Tatopani, which was almost 3km away from Drypot. So we had to hire a local vehicle. We reached Drypot exactly at 4:39 pm. Well, we were closer to the next destination. We were tired but still excited. As we reached Kodari we could see the destruction done by the earthquake that had occurred in 2015. Life there had not yet returned, the whole street was silent. We saw the places there and returned to Nayapul where our school vehicle was waiting for us.

Sunday treated us unexpectedly well. We had a long fine day. A day to remember!