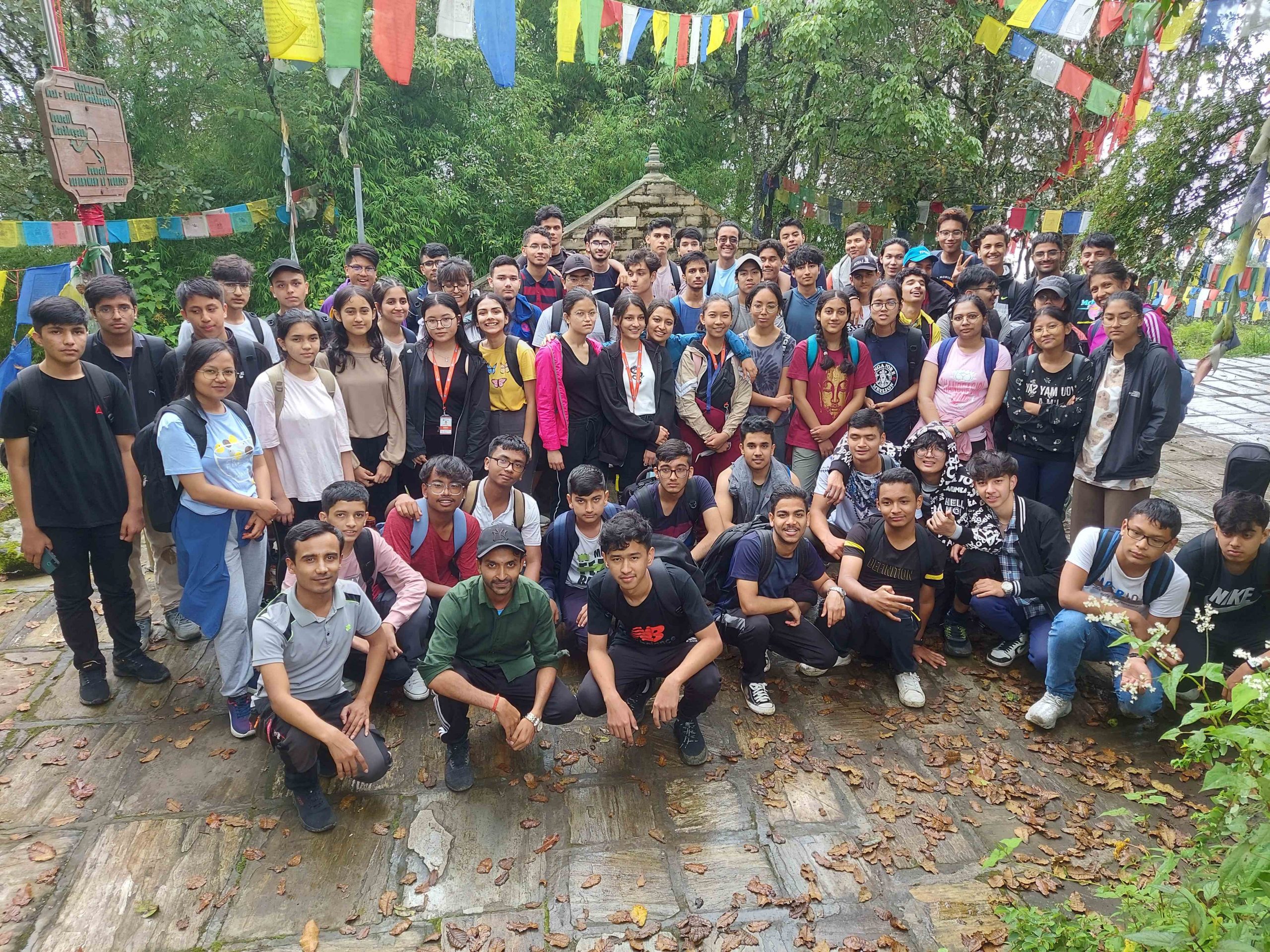 On Shrawan 15, the students of grade XI assembled at the school premises for the most anticipated hike. The hike started from Taudaha to the main destination Champadevi. We were accompanied by four faculty members Sarak Dangol, Madhu Sudan Bhusal, Santosh Shah and Sagina Maharjan. We headed off to Taudaha in the school bus at 8:00 am. The same buses were used by all of the teachers and students to travel back and forth.

There was no traffic while we set off to reach our destination. Everyone was excited for the hike. The bus stopped around 9:15 am and we enjoyed our light snacks before starting the hike. After around 20 minutes we reached near Taudaha and started our hike with great enthusiasm. We all were hyped up and looking forward to having a wonderful experience. As soon as we got off the bus, we noticed a small sign saying that we had arrived at the Champadevi Hiking Trail. While traveling along asphalt roads for the first kilometer, one of the less exciting parts of the path, we were able to observe the surroundings of Kathmandu’s outskirts.

At first everyone was very energized and walking constantly without any problem. But along the way there were many difficulties. We certainly climbed a hill through a shortcut and on top of it the trail was really slippery as it had rained earlier. After much effort we finally crossed the hill. There were also leeches in our way which made the hike more difficult. Few of them also got leech bite due to which bleeding occurred but still the journey continued. But thanks to the thoughtfulness and guidance of our teachers, the worst case scenarios were avoided and the hike was a great success. Even though it was a hike, our classmates were really enthusiastic and some of them brought guitar and were playing it which made the journey enjoyable.

The 2.2 km segment that climbs 600m to the top was the most difficult part of the hike. We continued on the route through this area for 700 meters before coming to a fork. From here, we turned right onto the main route and traveled northwest. A combination of single tracks, steep trails, and graveled paths make up the arduous 600-meter ascent. We kept a steady pace while walking and stopped when required. We marveled at the spectacular views of the verdant hills covered in vibrant flowers and hunted for signs of the local fauna, such as different kinds of birds.

The best thing was that the way was not the same, there were ups and downs throughout. Certainly, many of us were struggling during the hike. We also observed some drawings on the stairs while we were about to reach the temple. Eventually after a long walk of almost 4 hours we reached the Champadevi hill’s top 1.6 kilometers northwest around 1:15 pm. We were at an altitude of 2206 meters. We enjoyed a picnic lunch at the summit while unwinding after our climb. We also clicked a group photo then headed towards returning through the same way at 1:45 pm. It took almost 2 hours for us to return and head toward the bus.

After that we were all really tired and it took almost 1 and a half hours to reach the restaurant  to have food. There we enjoyed our special thakali meal and finally we came to the school around 6:30 pm. The view that we witnessed from the top was definitely worth climbing all those hills continuously for several hours. However, our trip would have been more practical and successful if we frequently had the opportunity to go hiking. Nevertheless we had the opportunity to ride alongside lovely, verdant rivers and experience the spectacular view of a few himalayas from a distance, which was novel and different for us. The satisfaction we felt was unmatched. It was enjoyable and unexpectedly amazing—an experience we had not anticipated.

We are grateful to the school for allowing us to go on this great trip and create new experiences that we will undoubtedly cherish for a very long time. Overall, the trip was very beneficial for the students and enabled them to seize the chance to do something new and create fresh memories. We anticipate that the school will frequently take us on such outings and aid the youngsters in developing through such real-world encounters.