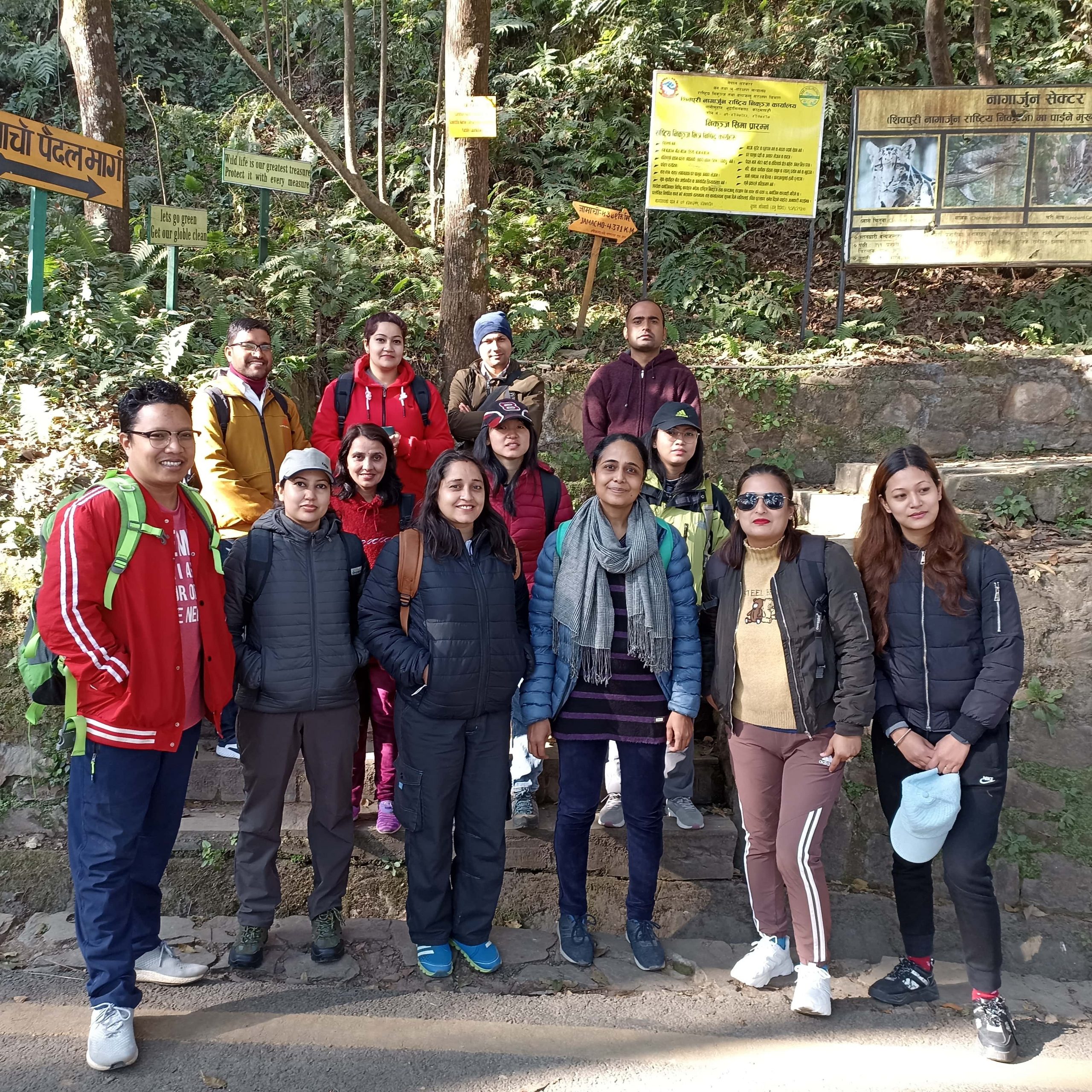 On Sunday 12th December, the faculty members of the Sifal School set on a journey to Jamacho. It has been a great privilege for me to be part of this trek. We all met at the Deerwalk Complex at 7:00 A.M. and left the venue at 7:30 A.M. Some of our faculty members were supposed to get on the way. Before starting out hiking, we stopped at a local hotel to have breakfast. Then, we headed towards the Fulbari gate. We reached the reserve around 9:15 am. and registered our names at the entrance gate of Jamacho Gumba, which was our final destination, and could be reached from two paths. One was easier with steps while the other was uphill and more difficult. We chose the stairs route.

Our hike began at 9:30 a.m.  It was a sunny day and smiles were on everyone’s faces as we marched towards our destination. The temperature was optimal and the weather was perfect. As the journey began with some stairs. We had talked about various topics; Lockdown experiences, wildlife, natural resources, education and many more. It was an enjoyable and peaceful walk only with the melodious chirping of the birds throughout the hike. We breathed a few hours after walking and enjoyed the magnificent view of Kathmandu Valley with a light snack. We also took selfies and group photos and captured the breathtaking beauty on film and in photos. Following the break, we kept walking towards our destination, arriving at around 1:15 p.m.

Jamacho Gumba lies at the top of the ShivaPuri Nagarjun National Park. From the top, we enjoyed the views of the Himalayan ranges, especially that of Langtang and Everest Himalaya and Kathmandu Valley. We were mesmerized by the scene. We took many pictures in that place along with a group photo.

It was getting late, and we decided to go back. Several of our faculty members decided to take the driveway, and some of them said to return from the stairs. We discussed for a while and finally decided to walk from the vehicle’s way. The way was new for all of us. We started our journey and after walking for 2 hours. We thought our journey was going to be completed in an hour but it was a never-ending journey. We all were exhausted. One of the faculty members, Yukta Burma, got a sprain in her leg.  When we asked one of the vehicle’s users about the distance, we came to know that we had to cover eight more kilometres.  Then we decided to call the micro but our misfortune our vehicle was not released.  They said that we need to get permission from the check post.  We decided to take a shorter route (steep route). While getting down from the steep road Samikshya ma’am got injured. Many of our members were injured and it was getting late too. Finally, after walking for two more hours we arrived at the checkpoint and asked to release our micro and waited there.  At 5:30 p.m, we got in our micro and headed for the Fulbari gate. Before returning to the Deerwalk Complex, we had our dinner together at one of the restaurants.

Our hiking was memorable and adventurous. While hiking, we felt the peace of mind in the natural environment.