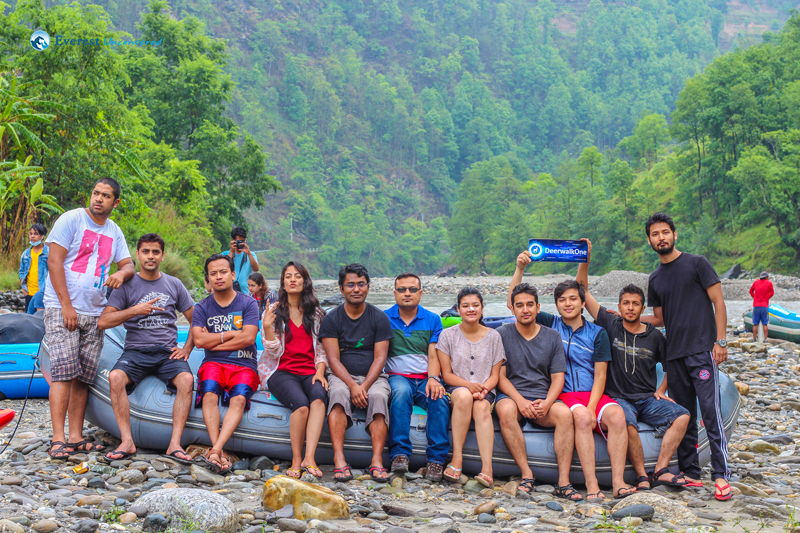 Day 1:
After a long time of planning and waiting, we were finally about to go for an outing to River Bay Rafting and Resort. Being far from the busy schedules and work load, wow, who wouldn’t want this? Due to some set priorities, we had to start our journey a bit late. That sounds boring right? But actually not, we made those waiting hours, even more special by playing UNO. That was my first time and I got a feeling that UNO is so entertaining game.

“Get ready, the van is going to leave.”, someone said and we carried our luggage and hurried. Fighting for lays, eating snacks and listening to music, we headed towards River Bay Resort. On the way we had Lassi. The taste of that lassi made our tour even more astonishing. Without any further delay, we headed towards River Bay Rafting and Resort. As we reached there, it started raining. Everyone was disappointed, but I and Milan chose to enjoy rain rather than complaining the nature. According to the plan, we had to play team games, but the weather wasn’t supportive. Everyone then jumped into the pool and started swimming in the rain. We were enjoying as we could, but something was so disappointing. The service we got in that resort was unappealing. May be it was due to too many customers to serve that day, but still they should manage as people go there with certain expectations.
Keeping beside all the services we were not satisfied with, we enjoyed loud music at night and those comfortable tents. We then played one game where each team member had to tell one bad habit and a good habit of the next team member. Sharing bad habits of the team members had been very strenuous task for each one of us. Now the surprise was made ready. A cake was brought, a candle was lit and we started singing, “Happy Birthday to you… May god bless you.. Happy birthday to you Sushil”. We decided to play the next game. Each member should show their talent. Everyone was so amazing and some were outstanding.

I was so tired and without any delay I went to the bed with Malika.

Day 2:
The next morning I woke up and decided I won’t be doing rafting. Because Saturday evening I had heard some people were badly injured while rafting and that story downhearted my enthusiasm to do rafting. But as we reached the rafting spot, a voice inside me said “I may die or live that’s none of my concern anymore, I just want to feel the nature to its fullest.” Then I decided to do rafting with my team members. Before getting ready for rafting, we clicked pictures in different poses. At 2 p.m., we started rafting and that moment was worth memorizing for the rest of our life.

I may die or live that’s none of my concern anymore, I just want to feel the nature to its fullest.

Truly, that was the moment I would like to live over and over again. As the wave of Bhote Koshi kissed us, we got thrilling sensation and we all were shouting with excitement. Everything felt so wonderful and the next adventure was awaiting us. Can you imagine, we all did cliff jumping! Wow, that was spine chilling experience. Then we returned back to our resort, but we already began to miss the rafting fun. We then had our lunch. Finally, we decided to play our team game before returning. I could never forget the fun, memories and joy we gathered there.

Avaya Prasad Pandey
Ever had one of those days where it feels like you woke up on the wrong side of the bed ? This exact thought was going through the mind of every Deerwalk Designers when we arrived at our destination. The only respite we experienced in an otherwise dreadful outing was when we went rafting. Let me now relay on to you the rollercoaster of disappointment and excitement that was our team outing.

The trip started innocently enough with everyone arriving in the office. The trip to river bay resort was as fun as anything you could ask for. We had a short break on the way to enjoy some fresh lassi. The bus ride resumed and after a few hours we arrived at our destination of River Bay Rafting and Resort. The moment we set foot on the resort things went south fast and the stage was set for what was to be our ordeal. We hadn’t even reached the reception when all of a sudden there was heavy rain. The assault was not just limited to the sky and the ground started shaking as well. The rain and earthquake forced the people staying to converge to the reception area. Customer service was nonexistent and our constant request to get our table cleaned was met with blank stares and what might as well have been hand waving dismissals.

Popcorn and chips! That was what they said would welcome us in the form of snack when we reached the resort. We reached the resort at around 4 PM and were served the snacks at 8 PM. The rain stopped us from playing any team games and we were cooped up in a tent playing the card game Uno. The accommodations were not anything to write home about either. We all went to bed just hoping for the trip to be redeemed by the rafting experience.

The following day came carrying with it our last chance at an enjoyable experience. We had our breakfast and were told that we would be heading out of camp at 9am. We were very eager and went to the specified place ahead of time. We finally started to have fun. The rain had turned to a mild drizzle. We had a picture session on the river side and played some games while waiting for the rafting equipments to be ready. We even helped readying some of the equipments. Finally the time to start rafting came at 2 PM. There was a briefing by the guides on what to do during rafting which included the different commands to steer the raft and what we were expected to do in different situations.

We also got the opportunity to jump off a cliff into the river. Let it be known that everyone in the creative department are thrill seekers because everyone jumped off the cliff, most multiple times.

We returned to the camp tired and spent. We played one more team game and distributed the prizes to the winning team. While returning home we reflected on our outing and found out that we had become closer as a team having to rely on each other because of the poor circumstances we faced in the resort.