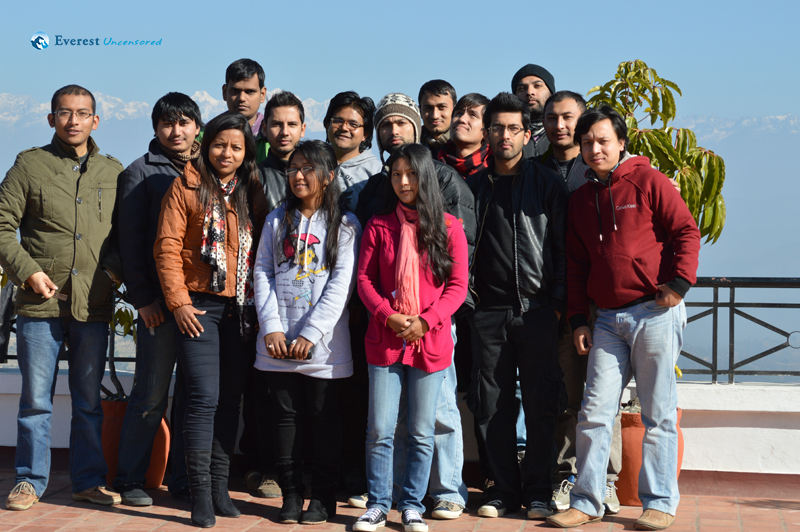 It’s always exiting and entertaining to move on from our daily office routine and go for something that really eases all of our stresses. As it was my first outing so I was bit more excited for this event.We were a total of 15 members for the outing to Dhulikhel. The Van left the office at 1 pm and we headed to our destination picking up other team members on the way. Everyone was singing and having fun, before reaching the destination at 3:15PM to Mirabel Resort, Dhulikhel.

The resort was really fantastic, cool, beautiful, and spacious, and the view of beautiful mountains was really mesmerizing.We began to play the team building games and played couple of games. Tthe funniest part was to dance on our own choreographed style. This was amazingly funny and could not stop ourselves from laughing. We all were exhausted after playing all these games.

At almost 8 pm we had our dinner and we all went wild, in a good sense, and started singing karaoke songs synchronously.We started dancing and singing for more than two hours, everyone was really unstoppable and showing their unique moves without any hesitation.We went back to our rooms thereafter. We all were so excited that we decided to start storytelling and it dragged me back to my childhood days. I really enjoyed it and it all ended at 1:30 AM.

The next day I woke up early and went for a walk around the resort along with two of my colleagues. Then we had our breakfast before returning back to the office premises.

So, I conclude that this outing was an awesome experience for me and I thoroughly enjoyed the company of my team members.

After much discussion and debate for almost every morning during our tea breaks, the proposed site to visit for our quarterly outing were – Nagarkot, Gorhaka , Lumbini, Pohakra, City Centre tour, Patle Ban etc. We could not concretely decide where to go for the outing. To my surprise I got a mail one day before the outing, saying we will be going to Dhulikhel, at Mirabel resort! It was my first time going on an outing with the colleagues from my new department – Production + DAS Scrub. From my previous outing I knew this was the best opportunity to get to know my colleagues and it was an event not to be missed. My past experience paid off, as the outing was whole lot of fun!

After about 2.5hr ride, and a pit stop at Bhat Bhateni, Koteshow to buy snack and refreshments for the outing we reached our destination at Mirabel resort. In the bus we played ‘antakchari’. After roaming around the resort for a while and taking some pictures, we were all set to play our first team building game. We were divided into group of three, and we had to make a tower out of balloons. Though my team didn’t perform amazingly in that game, it was good fun to be working as a team to achieve a common goal. The next game was to rescue our team member, whereby we had to transport all the team members to the other side of the field. Then for the next game we had to choreograph a dance together – we did the ‘harlem shake’ for that and it was amazing to see how everyone participated enthusiastically. Then after a short tea and snacks break, we played ‘dumb charade’. For that, one of the team members had to act and the rest of the team members had to guess the movie’s name, our team did pretty well in that. It was ‘dumb charade ‘with a twist as we even got a wildcard to help us out and we could tag other team members if the person couldn’t act properly.

After that we had our dinner and the whole scene got ignited with the introduction of the drinks. Without wasting time we went to sing the karaoke songs, and danced along the song as we even had disco lights in the room. The other team members were enjoying a game of cards. With songs, dance, drinks and cards everyone were having fun in their own ways. After party we went to our rooms, and heard some amazing ghost stories form Rishi, which though didn’t scare us – as there were eight full grown men listening to it, they were very interesting to hear. Next morning we went for a short tour around the resort, upon return from which we had our breakfast which was followed by our group photo. With the scenic Himalayan view at the backdrop, the cameras never stopped clicking.

The outing ended with discussion on what to do next once we reached Kathmandu, go for movies or lunch or brunch or back to the office premises for play table tennis etc., which ended without a concrete conclusion again! And that was the end of the outing. So, the thing that I took away from this trip was that we really don’t need a fixed plan to have fun, as long as we work together as a team with a common goal!