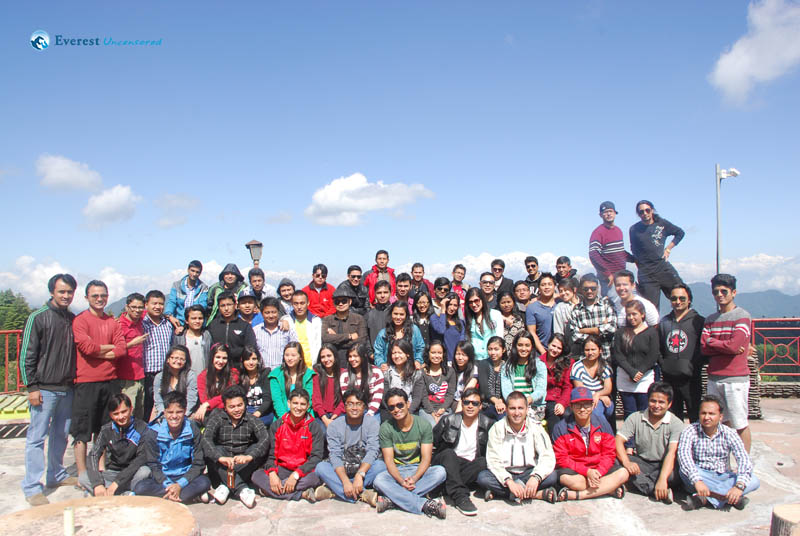 Ajita Poudel
18th October 2014, Saturday morning, I wondered if anybody was as excited as I was then. I woke up a little earlier than my usual time and there I was, ready and all packed before 9:30 A.M. After all, you cannot afford to be late on your first outing. I reached the office right on time at around 10:00 A.M, and to my surprise most of my friends were already there. Guess I wasn’t the only one excited about this whole trip. Two buses and a van ready to roll and pick up everyone on the way as we headed for Daman.

We had a nice journey, listening to music and of course singing. But turned out, the members of the other bus were enjoying more than us as we could see them dancing and singing and enjoying a lot inside the bus. After few hours of drive along with some beautiful view outside the window, we reached Dhading, where others were waiting for us. So we had our snacks in a school and couldn’t resist our temptation to snap few selfies and group photos. After a while we resumed our journey along with some singing and music inside the bus.
After almost 5 hours of twists and turns we finally reached our destination. Not as expected, winter in Daman had already begun. The chilling cold left us shivering for a while, but luckily I had carried a blazer with me, which was enough to keep me warm during the stay. We then headed to our respective rooms, freshened up and snapped a few photos.
I always wanted to go to Daman and it had always been on my “Places To visit” list. And when a chance finally knocked on my door, I was much obliged. At last I could strike it off my list and move on to others. Daman indeed is beautiful. Away from all the city chaos and pollution, I finally got a moment to savor the quiet nature and the fresh air.

It was around 5:30 P.M, our team gathered around for a farewell to Awanish dai as he would be leaving our team and joining the data team. Sad but the fact that he would be next door from us, kept our party mood alive. Without any further ado we rushed to the barbeque and bonfire. We then gathered around and started dancing with our best moves, drinking and devouring the food and more dance moves afterward.

It was truly a moment of bliss for me to meet such friendly people who made me really comfortable with the family environment.

It was truly a moment of bliss for me to meet such friendly people who made me really comfortable with the family environment.It couldn’t be any more perfect. After a while dinner was served and after satisfying meal we headed back for more fun. We started singing, playing instruments and dancing to the folk songs and cultural numbers. After hours of fun and laughter, our energy started to wear off. We then headed back to our beds for some rest so that we could wake up early in the morning and view the beautiful sunrise.
We woke up early in the morning as planned. Usually I would have been in bed at that hour, but the excitement to get the first glimpse of the sun rising early in the morning was just irresistible. So we headed to the top terrace to get a glimpse of the mesmerizing sunrise. As the golden sun rose slowly up the hill, scattering the light all around and glowing the mountain, we could not resist but capture this glorious moment in our cameras. It simply was breathtaking and unforgettable.

After a while we gathered again and headed for the hiking to Risheshwor Mahadev temple as planned earlier. The ups and downs on the stairs were excruciatingly painful. After 45 minutes of painful walk we finally reached our destination. But the pain didn’t last long. The beautiful sculpture of Mahadev was worth all the pain. It was simply a master piece. After few snaps (as usual) we headed back to our resort where our breakfast was already awaiting us. After a light breakfast we gathered around for more games and fun. We played unscrambling game where we had to make words out of jumbled letters. Then musical chair started. But the most fun was the one when we had to dress up guys in sari within 5 minutes and walk on the ramp. I participated in it too. It was absolutely funny to see guys in sari with their sun glasses and caps, walking on the ramp. We couldn’t help but laugh until our stomach started hurting. After all those fun filled games and laughter, winners were announced and they were handed the gifts. At the end Awanish dai gave his farewell speech and our managers joined in to express their views. It was 12 P.M, almost time to be back. So we packed our bags and headed back home with all the fun memories and thanked Daman for its enticing beauty.Adios Daman, will see you again.

Trip down the memory lane
The road went ever on and on
out from the door where it began.
Over rock and under tree,
by streams that never find the sea.
Pursuing it with eager feet,
Until it joins some larger way.
Over grass and over stone,
And under mountains of the moon.

Trip down the memory lane
The road went ever on and on
out from the door where it began.
Over rock and under tree,
by streams that never find the sea.
Pursuing it with eager feet,
Until it joins some larger way.
Over grass and over stone,
And under mountains of the moon.
This short poem from The Hobbit by J.R.R. Tolkien would best describe how I felt about the journey from Kathmandu to Daman. It was a short but pleasant escape from the monotony of the city, and something we all needed.

Once we were outside the city limits, it was quiet at first but then everyone started singing and when you sing with a group of people, you learn how to subsume yourself into a group consciousness because it is all about the immersion of the self into the community. That’s one of the great feelings – to stop being me for a little while and to become us. A brief lunchtime interlude inside an old school near Naubise was spectacular. We carried on once again towards the famous Everest Panorama Resort, going up and down the hill, under the cloud and the sun, with occasional bumps on the road and what felt like the longest trip I’d ever made in my entire life.

At long last, we reached our destination. After unpacking and a few minutes break to replenish the lost energy, we began exploring the unfamiliar place. It was cold and windy and night was already falling. Nowhere in the horizon could one see the promised look at the mountains. Eventually the party started, around the fire with lots of singing, dancing, jumping, laughing, running, stargazing and screaming at the top of your lungs. Then everything escalated. It takes only one drink to get me drunk. The trouble is, I can’t remember if it was the thirteenth or the fourteenth. Whatever happened next lies somewhere deep inside the corner of my mind. Those little bubbles of memory, I’m sure of it, will someday float up like surreal party balloons at unexpected times and start piecing together a colorful, if incomplete, version of what had transpired that night.

The following day, I woke up early with a dry throat, immense thirst and hunger. I went outside, it was cold and dawn was breaking. As the first light of the day hit the snowy mountains, I could barely believe what I was seeing. The serenity of the lulling mountains is a wondrous thing to behold, more precious than the gems coveted and covered in platinum or gold. Breakfast was followed by creative and hilarious team building games and a quick and delightful meal on the way back. Then, it was a long and bumpy ride home…..
“The real voyage of discovery consists not in seeking new landscapes but in having new eyes.”
– Marcel Proust

Lujla Maharjan
18 October 2014, My First outing to Daman with the entire QA team of Deerwalk has been one of the memorable moments for me. Excited mood all around made the outing full of fun and entertainment.

We reached the resort around 5pm; the cool weather, greenery surroundings and an outstanding natural beauty seen from the Everest Panorama Resort refreshed us. In the evening, we celebrated the farewell program organized for Awanish dai which totally surprised him, followed by barbeque enjoyment and campfire. Some were having fun dancing along the bit of music, some were watching football match on TV, and some were singing songs to the bit of the guitar, maadal and flute. The musical environment hypnotized us and compelled us to dance.
Next day, we woke up early in the morning to see the sunrise.

The peaceful environment, beautiful scene and Mountains were shining like diamonds as the dawn reflected off them.

The peaceful environment, beautiful scene and Mountains were shining like diamonds as the dawn reflected off them. Then, it was time for hiking to Rishikeshwor Mahadev, climbing up and down the hills for long duration; we reached the temple of Lord Shiva. On the way to Rishikeshwor Mahadev we enjoyed taking snaps and reached the resort at around 8:30am. We had our breakfast. After breakfast, we played the most awaited team-building games such as Word making, musical pass and sari wearing which was the funniest among all. After team building game, the outing committee conducted speeches from Awanish dai, Jeevan dai and Suraj Dai. We checked out from the resort at around 12:00 pm. After having lunch, it was time for departure. With all the awesome memories we headed back home. I’m really thankful to Deerwalk for this amazing outing.

Sajan Dhar Shakya
It all started from 10 am in the morning and we were all set to go. We started our journey with singers and dancers along the trip in the bus. Since everyone was hungry we stopped at a school in Naubise for snacks. We then reached Everest Panaroma Resort around 4 pm. The view from the resort was pretty eye catching.

All in all it was a great outing.

During the evening time we started partying. We enjoyed the party along with the barbeque that made the evening even more special. We had our dinner around 8, then after we gathered in the ground. Then the next morning the team building games started with some of the funniest moments in it. As we had very little time, we got the chance to listen to the inspiring speeches by our seniors.
All in all it was a great outing.